New highway is more than just a road for Myanmar Traffic travels on the old Myawaddy-Kawkareik road in Myanmar's Kayin State, which is about to be replaced by the new Asian Highway. (photo by Simon Lewis)
SIMON LEWIS, Contributing writerFebruary 15, 2015 17:00 JST | ASEAN
CopyCopied

KAWKAREIK, Myanmar -- For as long as anyone can remember, the road from Kawkareik in Kayin State to the Thai border has only been passable in one direction at a time. One day, traffic goes "up" from southern Myanmar's hinterland; the next it goes "down" from Myawaddy -- the busiest trade post on the Thai-Myanmar frontier. Myawaddy is just opposite the Thai town of Mae Sot. 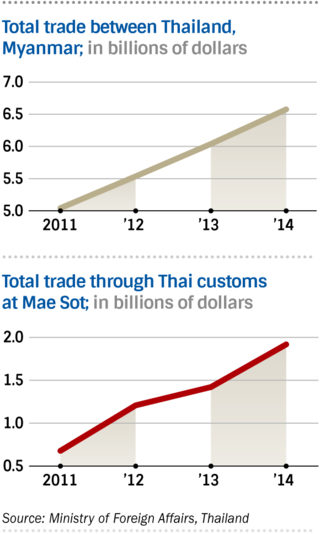 The poor condition of the road that crosses the Dawna mountain range means the journey of just 32km -- as the crow flies -- can take more than four hours by car. But a new road now nearing completion will cut that time to less than an hour, potentially turning Myawaddy's scrappy border crossing into a major trade hub.

Myanmar state-run media says the new Thai-funded road is not scheduled to open officially until July. But foreign businessmen and locals who can afford the steep tolls are being allowed onto its as-yet unsealed surface.

The road forms part of a long-promised "Asian Highway" that will eventually connect Yangon to Bangkok. Right now it is one of the crucial links still missing in the push by Association of Southeast Asian Nations members to achieve greater connectivity across the region.

"I think trade will be better with the new road," said Ma Moe Moe, who runs a company trading in construction materials and other goods in Myawaddy town. During the monsoon season from May to October, the road is often completely impassable, she noted. 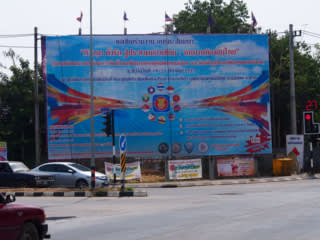 A sign contains details of new highways to run from Myanmar to India and China. (photo by Philip Thornton)

Even ahead of the road's completion, Myanmar's border trade has exploded since the country's new civilian-led government began economic reforms in 2011. According to Thai government data, the value of total annual trade through the Myawaddy-Mae Sot checkpoint rose from less than $700 million in 2011 to more than $1.9 billion last year.

The vast majority of that trade is Thai goods entering Myanmar, including diesel, foodstuffs, autos and construction materials. Less than 5% goes the other way, mainly agricultural and fisheries products. Thailand also imports natural gas from Myanmar through cross-border pipelines.

Complementing the new road are advanced plans for a second Thai-built bridge crossing the Moei River between Mae Sot and Myawaddy. The Asian Development Bank is supporting the rehabilitation and widening of another 70km stretch of the road between Kawkareik and Eindu, in Kayin State near the border.

Jamie Leather, the ADB's principle transport specialist, said the combined improvements "will change travel times between Myanmar and Thailand and thus make trade easier and more efficient, which in turn is likely to increase demand for travel.

"It is hard to predict exact levels of growth as this will depend on not just road improvements, but also infrastructure at the border and soft issues such as customs procedures," he added.

The new road could also make the crossing "a major gateway for travel to Myanmar," said Marcus Allender, founder of travel website Go-Myanmar.com. Mae Sot's road and air connections to the rest of Thailand, and the crossing's proximity to tourism hot spots in southern Myanmar, are bound to make it the favored route for overland visitors to the country, he said.

"Overland travel to Myanmar is an area of massive untapped potential, and if the Myanmar and Thai governments can agree on allowing through transport -- and subject to security concerns -- the new road could well shake up the market," said Allender. 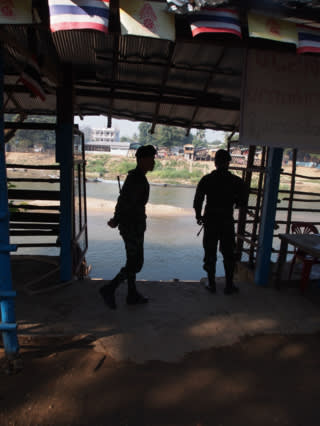 Those security concerns could be significant. Kayin State has been wracked for more than six decades by what may be the world's longest-running war. A ceasefire was signed in 2012 between the Myanmar government and the Karen National Union, but groups of armed men -- from the KNU's armed wing or a number of other pro- and anti-government militias -- still control pockets of territory around the new road.

In September, a spate of skirmishes broke out between armed groups around Myawaddy. In one incident, a mortar hit a rest stop on the old mountain road, killing four civilians. It is unclear who fired the rocket, but it raised fears locally that travel in the region was becoming less safe.

The new road is reportedly under the direct control of the Karen National Union. One Western expatriate working with a foreign company in Myanmar said he joined a convoy using the road on a business visit to Kayin State recently.

"There were KNU checkpoints with armed persons on the road, one at each end and a more scrutinizing one toward the middle," he said. "We received permission to travel on the road via KNU leadership."

Myanmar's central government hopes that sharing the perks of economic growth with ethnic communities will mean that former insurgents will gain a material interest in ensuring a sustained peace.

"They own transport cars, so they will benefit from more trade," said Myawaddy-based businessman Wai Zaw. He warned, however, that the presence of multiple armed groups in the area could lead to volatility.

"If the government puts on pressure," he said, "there can easily be small fighting near the road over disputed zones."