ASTANA -- Media trainer Anara Kuandikova, 29, is typical of the generation of post-independence professionals who have most to lose if anything goes wrong with oil-rich Kazakhstan's scandal-struck Unified Pension Fund. "I still see my pension contributions as a real investment in my future," said Kuandikova, who works in Astana and pays a tenth of her $600 monthly salary -- one-and-a-half times the national average wage -- into the fund.

Struck by a series of scandals since the beginning of the year, the Unified Pension Fund has become an emblem of the tension between the Central Asian state's self-image as a modernizing power of the future and growing public clamor over state corruption and mismanagement. Older Kazakhs are expressing worries amid a series of scandals at the state pension fund. (Photo by Alexey Filippov)

In January, fund head Ruslan Erdenaev and financial department chief Musa Bakhtov were both arrested on embezzlement charges. The pair stand accused of taking bribes and misdirecting about 5 billion tenge ($14.6 million) from the fund into two privately-owned mining companies, whose chief executives were also arrested. The four remain in detention. It is unclear whether they have denied the charges.

Months after the arrests it emerged that the UPF, which operates under the aegis of the National Bank of Kazakhstan, the central bank, faces losses on an investment of around $250 million in a 10-year bond issued by the International Bank of Azerbaijan, a lender controlled by the government of Azerbaijan. The bank is restructuring after financial difficulties.

The arrests of the UPF executives caused "a public explosion" and highlighted how savings were "invested in junk projects and shares," said Bota Zhumanova, an economic analyst.

In reaction, the UPF formed a council of experts to provide oversight. But Zhumanova resigned two months later, along with Dosym Satpayev and Rakhim Oshakbayev -- also well-regarded independent analysts -- in frustration at the council's limited power to ensure transparency and determine policy at the fund, which has assets of more than $20 billion.

"The people of Kazakhstan expected us to have a greater role in shaping ongoing pension reform," said Satpayev. "Instead [fund officials] clearly set boundaries for our work and let us know we were not to go beyond them." Public anxiety over pensions has prompted an outburst of angry social media posts. "If the state in principle cannot stop itself stealing and is not able to manage our pensions, then it should lose the right to provide us with pensions," Aidos Sarym, an independent political scientist, said on Facebook, drawing over 700 likes.

The controversy comes as Nursultan Nazarbayev, Kazakhstan's autocratic president, seeks to shape his legacy during a period of relative austerity brought on by depressed oil prices and economic woes in neighboring Russia. The central bank is also under heavy pressure, in part because of a 2015 decision to abandon the tenge's peg to the dollar, which caused the currency to shed half its external value and depressed real incomes.

The central bank's office in Astana is modest compared to the capital's flashier government buildings, with an understated decor that retains the spartan feel of the former Soviet Union, from which Kazakhstan became independent in 1991. "We cannot lecture people about financial sustainability and then spend large amounts of money on furniture," joked one senior member of staff.

Central bank Governor Daniyar Akishev told the Nikkei Asian Review that the investments of UPF funds in local mining companies and the International Bank of Azerbaijan were made under a "previous decision-making format" before he took over as governor in late 2015.

"Such decisions would be impossible now. The new format for making decisions with regard to investments is more complex, more transparent and subject to greater hierarchical scrutiny from different layers of government," he said.

Nevertheless, Akishev accepted that a 2013 reform that shifted the management of pension assets to the UPF from a collection of private funds had "increased public focus" on pensions, while robbing savers of a sense of choice. 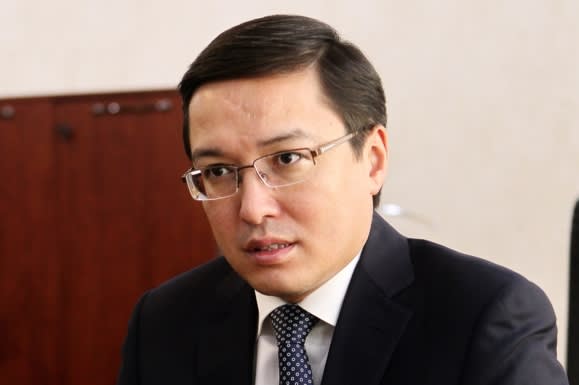 Prior to the reform, depositors could choose between 10 private pension funds, mostly managed by local banks, and a state-managed fund. Officials argued that they could raise returns for pensioners by putting all the funds under state control, since most were struggling to keep up with inflation.

Akishev's attempts to distance himself from the controversies surrounding the UPF have irked his predecessor, Kairat Kelimbetov, prompting a terse exchange of words through the local media. Kelimbetov, also a highly regarded technocrat, noted that Akishev was a member of the central bank's board when the decision to invest in the International Bank of Azerbaijan bond was taken. Akishev has reiterated that he had no direct responsibility for overseeing the investment, which he said is "likely to entail some kind of loss."

The Azerbaijani bank is undergoing a debt restructuring, having defaulted on $3.3 billion in foreign debt obligations in May, and has said Kazakhstan cannot expect preferential treatment ahead of other creditors.

"The investment was made with no guarantees, no mechanisms for defense, and concerned an institution based in a foreign jurisdiction," Akishev said. "When we first began our enquiries, [the bank] told us: 'You don't have any legal right to demand the return of this sum ahead of schedule. Wait until 2024.'"

The World Bank has predicted that Kazakhstan's economy will pick up this year after recording growth of just 1% in 2016. However, the oil revenues that fueled lavish public spending at the beginning of the century have largely evaporated. The pensions debate is linked to the Kazakh population's broader concerns about the economy. (Photo by Alexey Filippov)

With a diminished state budget limiting public investment, Satpayev and others argue that policymakers viewed the newly created UPF as a fresh source of revenues. "In my view, they wanted a new pot to dip into to fund national projects, including ineffective ones," Satpayev said.

In addition to the budgetary straitjacket, lower oil rents have posed new political risks for a government that prided itself on maintaining relative stability but has faced increasing public challenges. Police last year made hundreds of arrests to prevent a series of rallies against disputed land code amendments turning into a nationwide protest.

Pensions could become another lightning rod for dissatisfaction with declining living standards -- albeit largely among the more affluent, who have made the largest contributions -- unless the government can shed its reputation for financial mismanagement.

Kate Mallinson, an associate fellow of the Russia and Eurasia program at Chatham House, London, said many middle-class Kazakhs long ago began searching for alternatives to their compulsory pension contributions to provide safeguards in old age.

Reports in 2016 that pension assets had been plowed into a sustainable energy-themed expo, currently under way in Astana, had amplified perceptions of "the administration's general mis-governance and the impunity of senior decision makers," she said.

The expo's organizers denied the reports, but Mallinson said the debate about pensions "is clearly linked to the Kazakh population's broader concerns about their own futures and the state of Kazakhstan's economy."