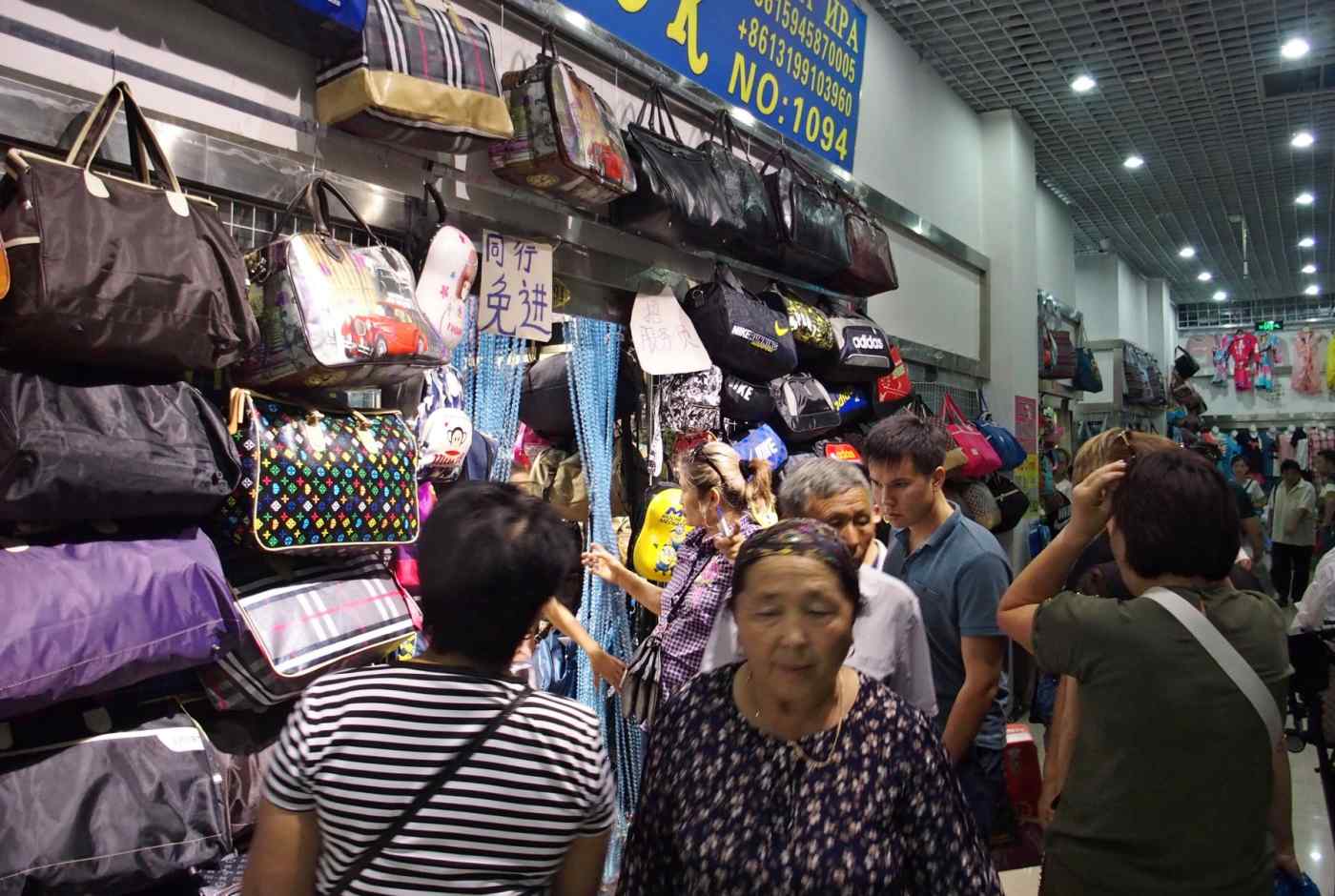 On the Chinese side of the border free-trade zone in Khorgos, shoppers from Kazakhstan are busy shopping for goods from China.
AKIHIRO SANO, Nikkei staff writerOctober 14, 2017 20:00 JST | China
CopyCopied

KHORGOS, Kazakhstan -- A four-hour drive from Almaty, the largest city in Kazakhstan, in the vast wasteland to the east leads to a new logistics station in the China-border city of Khorgos. 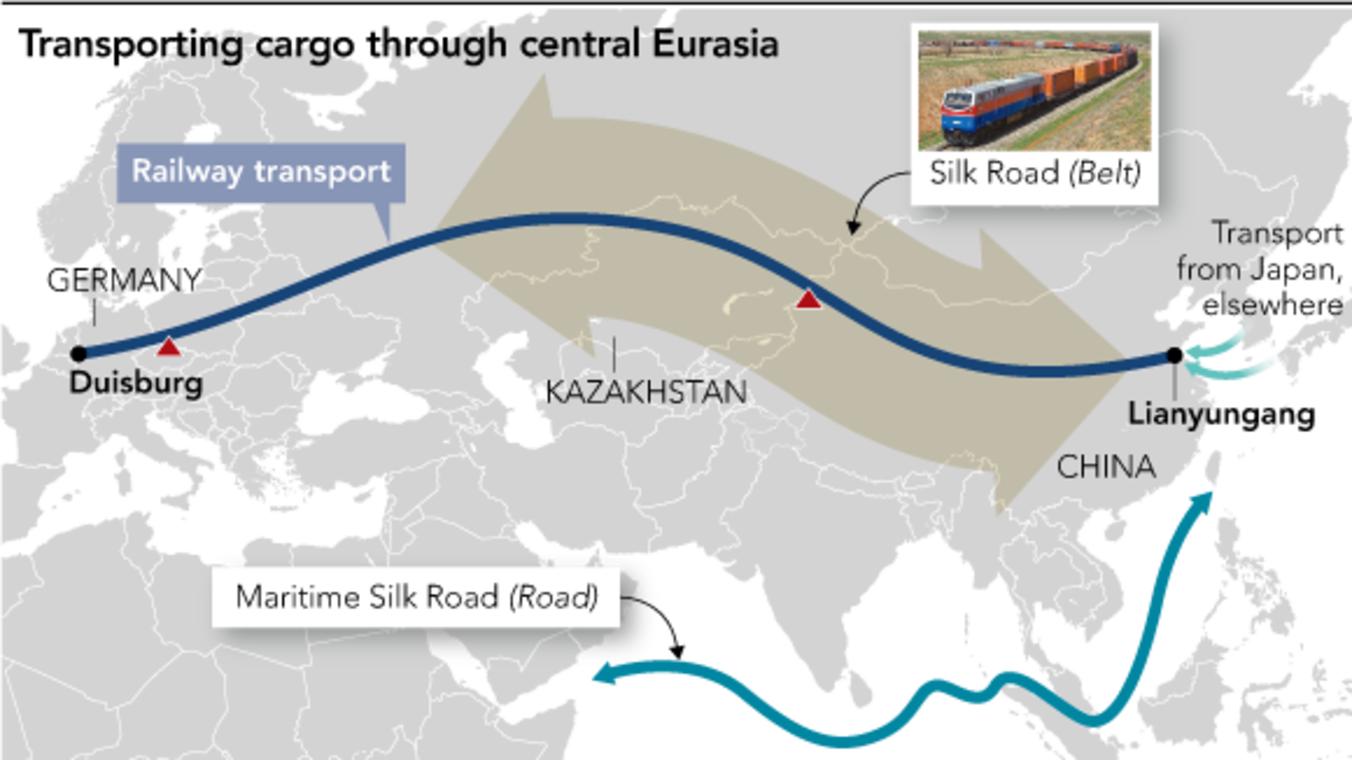 Toshiba to buy back Westinghouse stake from Kazakh company

The so-called dry port, developed by Kazakhstan Temir Zholy, the country's national railway company, has processed about 110,000 TEUs, or twenty-foot equivalent units, of containers since its launch in 2015.

"This train is bound for Duisburg in western Germany," an executive overseeing the dry port's operations said recently. Because China and Kazakhstan use different track gauges, cargoes coming from China have to be reloaded to Kazakhstan trains before they continue their journey toward destinations in Europe. High cranes were busy transferring freight from one train to another.

The freight trains leaving the port mostly carry autoparts and electronic devices, and usually take 10 days or so to travel to Germany. It used to take 40 days or so to ship freight from coastal Chinese cities to Europe via sea routes. The new train route has drastically cut the time to roughly half. Many freight owners who want speedy shipping opt for the train routes despite the higher costs than by ship.

China is increasingly looking to Kazakhstan as a key hub for its "Belt and Road" routes. In May, China's Cosco Shipping, the world's No. 4 shipper, and the operating company of Lianyungang, a key port for China's freight corridor north of Shanghai, said they would jointly acquire a 49% stake in the inland port in Khorgos. The announcement was made on the sidelines of an international conference in Beijing of government leaders.

Another location displaying Beijing's growing presence in the border city is the Khorgos International Center for Boundary Cooperation, a special free-trade zone in which people on both sides are allowed to cross the border without passports.

On a recent day, tenants of the duty-free shopping mall on the Chinese side were crowded with shoppers from Kazakhstan. "Even with costs for driving all the way to here, it's cheaper to come here to shop," said a 58-year-old man from Almaty.

Here, bed linens and towels sell for about half the prices as in Kazakhstan. The location was launched in 2012. The number of visitors to the center expanded fivefold from 2013 to 2016, to 3.18 million. Affordable prices seem attractive enough to lure shoppers from even more distant locations, including Siberia and Kyrgyzstan.

While China has been active on development on its side of the border zone, already completing hotels and five shopping-mall buildings, construction work on the other side of the border appears to be going slowly. There are only small duty-free shops, mostly run by Chinese, and warehouses on the Kazakhstan side.

The imbalance is visible in freight traffic, too. Containers going through the inland port regularly carry full loads of goods to Kazakhstan, but on the way back to China, they are often empty -- Kazakhstan exports few items except uranium and crude oil.

That one-sided relation, on the other hand, is causing a feeling among Kazakhstan people that their small country, home to nearly 18 million population, could be incorporated into China one day. Last year, protests spread across Kazakhstan against a proposed revision of legislation that would allow foreigners to borrow land in the country for longer periods.

But "Kazakhstan will after all have no choice but [to] accept China," said defense expert Marat Shibutov. That is because the country's heavy reliance on natural resources means it suffers from falling crude oil prices, and China is an essential provider of funds to the country.