The EXPO 2017 exhibition site in Astana will be transformed into the Astana International Finance Center by the end of the year. (Photo by James Kilner)
JAMES KILNER, Contributing writerJuly 28, 2017 20:17 JST
CopyCopied

ASTANA -- For Baurzhan Bektemirov and his colleagues, the heavily promoted multibillion-dollar Expo 2017 that Astana is hosting until Sept. 10 is merely a warm-up. 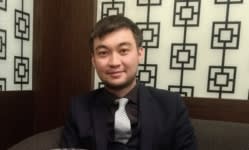 Bektemirov, managing director of the Astana International Finance Center, said in an interview that he was excited by the prospect of creating a regional hub for companies and a capital market on the site after the expo.

At the core of the AIFC will be a stock exchange and a finance hub for companies doing business under an independent court system based on English common law. Businesses that relocate to the AIFC will pay lower rents and be exempt from income tax for 50 years.

"There is one problem with Expo 2017 -- working out what to do with the empty buildings. We are going to inherit the buildings," said the Harvard University-educated 31-year-old.

Expo is an international exhibition, held every few years, that originated in 19th century Britain. Countries set up exhibitions to showcase their culture and ideals. Globalization, the internet and cheap travel have reduced its appeal, and the current Expo series has been largely disregarded by Western countries. For Kazakhstan, though, it remains a prize to flaunt.

The first former Soviet state to host Expo, Kazakhstan has come a long way since it gained independence in 1991. Blessed with oil, gas and precious metals, it is the wealthiest and most stable of the five former Soviet republics in Central Asia. Its leader, 77-year-old Nursultan Nazarbayev, views Kazakhstan as a fulcrum for East-West trade and a crucible for international relations.

Now, with an eye on his legacy, Nazarbayev has ordered officials to set up a financial center in Astana, the capital city he built on the wind-battered steppe in 1997. He has established an Astana Financial Services Authority to regulate the industry, and even tinkered with the Kazakh constitution to accommodate a new judicial system that will be overseen by foreign judges.

"If you want to build new business, new companies, you need to build new institutions," Bektemirov said. The AIFC will open for business by the end of the year. An Astana International Exchange, 25.1% owned by the Shanghai Stock Exchange and powered by Nasdaq technology, will start operating in 2018.

The cost of the project is relatively low. Just $40 million was earmarked for setting up the AIFC in Kazakhstan's 2017 state budget, because the site has been gifted by the government. Still, some observers are skeptical of the AIFC's chances of success, pointing out that decent infrastructure is just a part of what is needed to create a global financial center.

Alex Nice, a Moscow-based analyst, said Kazakhstan suffers from an image problem. "There are going to be questions about corporate governance. External investors will be concerned about how safe their investments will be even under this new investment center," he said.

Nice pointed to governance problems at Kazakh miner Eurasian Natural Resources Corporation after it listed on the London Stock Exchange in 2006. The company was eventually forced to delist and rebrand seven years later. It is now known as Eurasian Resources Group.

A more recent reminder of Kazakhstan's reputation for corruption was the arrest in January of Kuandyk Bishimbayev, the economy minister, for allegedly taking a $2 million bribe in exchange for contracts linked to a glass manufacturing plant.

"What happens when somebody gets into conflict with a politically powerful Kazakh?" said Nice. "Will the rule of law be held up?"

Bektemirov argued that the AIFC, headed by Governor Kairat Kelimbetov, would be a shining pillar of good governance and stability. Kelimbetov also has a reputation to restore. In November 2015, he was sacked as head of the central bank only two years into the job after a collapse in the tenge, the national currency.

Kazakhstan already has a stock exchange in Almaty, the former capital on its southern border. The Kazakhstan Stock Exchange emerged in the early 2000s from a former incarnation as a currency-trading platform. It was hoped that KASE would lure emerging markets stocks and, in turn, foreign investment. Instead, it is an illiquid market with just 130 listed stocks.

Bektemirov said that some of these companies have dual listings that drive trade elsewhere. "GDRs (Global Depositary Receipts) were issued in London, and that was why all the market ended up in London, because nobody would come to Kazakhstan," he said.

Many of these companies have now delisted or closed down, although KazMunaiGas Exploration and Production, linked to the state oil and gas company KazMunaiGas, still lists GDRs in London.

The AIFC will receive a major boost next year with the expected initial public offerings of national carrier Air Astana, KazMunaiGas and nuclear agency Kazatomprom. These will have their primary listings in Astana but could sell up to 25% of their stock overseas. Kazakh law caps foreign ownership at 49% for most companies.

"It's in the interests of the country for companies to list here and perhaps go to London as a secondary option. Companies can go there, but not until there is trading here," said Bektemirov.

But it is not only Kazakhstan's image problems that will make the AIFC a tough sell. Astana, itself, may be an issue.

Nazarbayev has heavily patronized his capital. He quit Almaty to make a physical break from Kazakhstan's Soviet past, move out of an earthquake zone and edge closer to the potentially rebellious north of the country. Previously a scruffy Soviet-era regional administrative town called Tselinograd, Astana now boasts high-rise apartments and glass and steel shopping centers -- one with its own beach, a mock Arc de Triomphe and a Viennese-style opera house.

Still in development mode, Astana offers a limited choice of housing stock, restaurants and other amenities. The government says 1 million people live in the city but it hollows out at weekends and holidays.

The city is also dependent on the government for jobs. There are a handful of private companies in Astana, but Almaty is more alluring with its mountains, nightlife and easy access to the rest of the region. Indeed, most foreigners, Kazakhstan's important financial companies and its central bank, are based in Almaty, which is still considered Central Asia's financial hub.

Other than mid-sized ForteBank, finance companies have resisted a move north to Astana. The Eurasian Development Bank, the intergovernmental regional lender, is also based in Almaty. And there is no getting away from the fact that Astana is the second coldest capital city in the world, after Ulaanbaatar, with temperatures plunging to minus 35 C in winter.

As a consequence, the AIFC does not make much sense, said Mathieu Boulegue, an analyst at Paris-based Aesma Group, arguing that the project has the whiff of a prestige project, or an afterthought.

"Stock exchanges are divided up geographically," he said. "It'll be hard for Kazakhstan to justify the creation of a new 'financial time zone' crammed between London and Asia and seeking to compete with the Gulf." Boulegue said, though, that the AIFC may be able to carve out a niche in Islamic finance.

This is a sector that Bektemirov already has in his sights. "The AIFC will be a gateway to Russia and Central Asia," he said. "We are not going to compete with Singapore, Hong Kong or Dubai, that would be naive, but there is a need for a sector of excellence in the region."