TOKYO -- Japan's Keio University will in fall 2016 enable students in the economics department to take all classes in English.

Students will be able to take a wide range of business-related courses, and serve internships at numerous companies and institutions once the program is launched.

Why is Keio University, one of Japan's top private universities launching this kind of program?

The Nikkei recently caught up with professor Shinsuke Nakamura, the dean of Keio's Faculty of Economics. 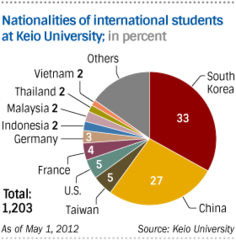 Q: You have decided to launch a "Programme in Economics for Alliances, Research and Leadership," Pearl for short.  It will enable students to obtain economics bachelor's degrees in four years, studying exclusively in English.

A: The program is designed to prepare the students to display leadership in business and other fields on the global stage in the future. We hope to create a sense of solidarity between Japanese and foreign students through the program. Many of the Japanese graduates will become international businesspeople, we hope.

Pearl will train students to work anywhere they wish around the world. Keio will admit foreign students to the new program. This is designed partly to increase the number of future foreign business leaders who have an affinity for Japan and Japanese culture. If this does not happen, Japan will not remain prosperous going forward.

We have been preparing the program for three years now. We plan to launch it in September 2016. Some 100 students will be admitted to the program every year, accounting for nearly 10% of the 1,200 students enrolled in Keio's Faculty of Economics annually. We would like to form partnerships with a number of universities overseas, actively exchanging faculty members and students with them. We will also use our offices in Shanghai, London and other locations to recruit students to the new program.

Q: How will Keio deal with global competition?

A: Keio's faculty members will be evaluated using overseas standards under the new program. Their classroom performance will be key. This will certainly make all faculty members nervous, but I want to see Keio measured against top global universities. So far, Keio has been compared only with other top private universities in Japan.

A: We will admit students to our new program using tests taken widely abroad, including the "SAT" used commonly by American universities and colleges, as well as the diploma awarded at the end of the International Baccalaureate program, which many foreign universities recognize. We will also consult applicants' TOEFL scores to check on their ability to communicate in English. Letters of recommendation might also be consulted.

Q: What kind of students would you like to admit to the program?

A: We are looking for students who want to enhance their ability to communicate their ideas in English, and want to be active globally in the future. It is also necessary for them to be well-grounded in economics. Without the right knowledge, you would be doing more harm than good by eloquently communicating your ideas in English. So, the students admitted to our program must be interested in studying economics. We want foreign students in our program to become interested in Japanese and other Asian cultures as well.

A global consensus on economics is developing. Similar basic theories are taught wherever you go in the world. On the other hand, economics is one of the social sciences, so it is about more than just learning basic economic theories. It also involves studying institutions and practices specific to countries and regions. I believe that studying these issues will play an increasingly large part in economic research going forward.

Q: Will you increase the number of foreign faculty members to launch the new program?

A: We might hire new foreign instructors on a temporary basis. We have been running a program since 2005 to teach economics courses to juniors and seniors in English. We also have a double-degree program with France's Institut d'Etudes Politiques de Paris. We also have many Japanese faculty members who have received degrees from Western universities or have taught overseas. I am confident that they can teach economics in English fairly competently.