NAYPYITAW -- In a marked departure from recent years, Myanmar has drastically slashed its dependence on investment from China, even as the burgeoning democracy opens its arms to a flood of funds from other nations in Asia.

Overall, foreign direct investment is on track to nearly triple on the year in fiscal 2013, which ended in March. The latest government data shows that investment from abroad for the April-December period alone already amounts to roughly $2.15 billion, 50% more than the figure for all of fiscal 2012. 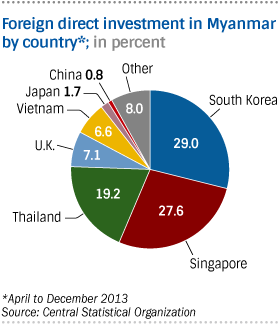 Other countries in Asia, with the notable exception of China, have been driving the dramatic increase. Chief among them is South Korea, which in the first three quarters has already invested 17 times more than during all of fiscal 2012. South Korean companies are investing heavily in the textile industry, whose exports have been expanding since the European Union eased economic sanctions on Myanmar last year.

Singapore is a close second. On the back of growth in the property development sector, investment from the city-state is poised to double or even triple in fiscal 2013.

The overall boom stands in stark contrast to the plunge in investment from China. Between April and December, China pumped roughly $18 million into the country. The full-year sum will likely be limited to $20 million or so -- only one-20th the roughly $400 million seen in fiscal 2012 and less than 1% of the peak marked in fiscal 2010.

The picture was quite different just a few years ago. After the West ramped up sanctions against Myanmar in the second half of the 2000s, China cozied up to the nation, which at the time was ruled by a military junta. In fiscal 2011, China accounted for over 90% of all foreign investment in Myanmar. The spring of 2011 marked a sea change with the beginning of democratization. The democratically elected president, Thein Sein, began improving ties with the West and distancing his country from what had been its greatest foreign benefactor, Beijing.

A stalled Chinese hydroelectric power project is emblematic of this shift. In autumn 2011, Thein Sein ordered a halt to all work on the Myitsone dam being developed by China Power Investment. Company executives went to Myanmar to plead for a resumption of the project, but the president did not budge, saying it would remain suspended while he is in office.

The move reflects the public backlash against Chinese control of Myanmar's resources as well as growing confidence in improving ties with the international community. The developments represent a shift from an outsize reliance on China to a more even-handed foreign policy allowing Myanmar to garner aid from a wider range of partners.