Automation and service cutbacks are key to greater productivity TOKYO -- Japan's businesses are working to do more with less as labor in this country grows scarce, turning to new technology and abandoning long-held tenets of customer service in order to use limited resources efficiently.

Yamato Holdings has said it intends to bring 10,000 new delivery drivers and distribution workers on board this fiscal year. But the Japanese logistics leader is taking steps to reduce its hefty labor needs in the future, well aware that, as the country's population declines, competing on manpower alone is no longer a viable strategy.

In a quiet residential corner of Fujisawa, Kanagawa Prefecture, Yamato and internet content developer DeNA are testing what could be the future of home delivery: a system ferrying packages to an appointed place within a specified 10-minute window that could be entirely automated when fully developed. Yamato Holdings plans to bring packages when and where recipients want them, eliminating multiple delivery attempts.

A truck with several lockers arrives at the location a recipient has chosen -- in front of a home or office, or even along the road -- at the designated time. The recipient unlocks one of the units and retrieves his or her package, and the truck moves on to the next destination. Currently, the delivery trucks are human-operated. But once automated driving technology hits the roads, people could be taken out of the equation altogether.

Making delivery as convenient as possible aims to eliminate the need to re-attempt delivery on items -- now a costly drain on resources for Yamato and other shippers. The rise of single-member and dual-income households means more homes are unoccupied during the day, and therefore cannot receive deliveries. Second or additional attempts make up around 20% of the work by Yamato's delivery operations. As the labor shortage stretches shippers thin, offering complementary re-delivery has become a luxury many can no longer afford. 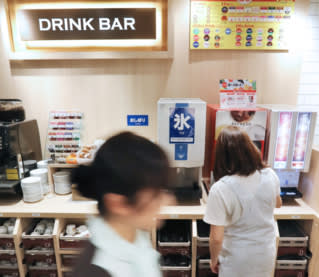 More companies are taking a critical look at aspects of customer service that are, in certain respects, excessive. This includes the family restaurant chain Denny's, which is run by a Seven & i Holdings company in Japan. The chain has offered patrons full drink service since its 1974 debut in Japan, using circulating servers to keep coffee cups full. That will now be phased out over the course of a year or so and replaced with self-service drink stations at its 380 or so restaurants nationwide. The change will let certain locations function with four servers at times when five would otherwise be needed.

A growing number of Japan's roughly 10,000 family restaurants are finding it difficult to lock down the staff they need to operate, even by offering part-timers more than 1,000 yen ($8.90) per hour. Royal Host, a unit of Royal Holdings, ended 24-hour service at its restaurants by the end of January -- a move that dented revenue but helped make locations more profitable by significantly cutting labor costs.

At the recently opened Henn na Hotel -- whose name is a play on the Japanese word for "strange" -- just seven workers serve 100 rooms on six floors. This is a quarter of the typical staff at such a facility. A fleet of around 140 robots help clean and handle customer service, including two mechanical dinosaurs at the front desk that can recognize languages including Japanese and Chinese, and help guests through the automated check-in process.

Henn na "aims to be the world's most efficient hotel," said Hideo Sawada, CEO of travel agency H.I.S., which runs the facility, located in Chiba Prefecture.

Japan ranks 22nd among the 35 members of the Organization for Economic Cooperation and Development in terms of per-worker labor productivity. If companies fail to make bold service changes and incorporate cutting-edge technologies, business activity will inevitably slow as the population dwindles. On the other hand, the current labor crunch -- the first in the quarter-century or so since the bubble years -- is an excellent chance for businesses to drastically overhaul their operations and usher in a more productive future.