Laos discovers the power and pitfalls of Chinese investment An employee at a local restaurant in Muangxay, a city in northern Laos, accepts yuan. According to the owner, 30% of customers use the Chinese currency. (Photo by Ken Kobayashi)
TAMAKI KYOZUKA, Nikkei staff writerDecember 4, 2014 00:00 JST | China
CopyCopied

BOTEN, Laos -- Neon signs light up the night in Muangxay, an urban area in the northern province of Oudomxay, Laos. Many have the two Chinese characters that mean "hotel," one of numerous indications of China's influence in this zone about 80km south of the border. The province is home to a scattered population of some 270,000.

At a restaurant recommended by a local Laotian, a large proportion of the clientele is Chinese. One suntanned Chinese man, who looked like a construction worker, wolfed down Laotian noodles and fried vegetables. He then took out a few 10 yuan ($1.63) notes from his pocket, handed it to the waitstaff and left. Hotels and supermarkets selling Chinese products also welcome payment in yuan. 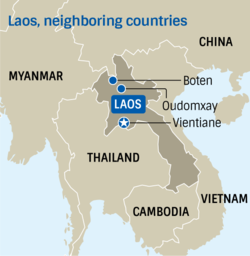 "The town had only dirt roads until five years ago, but the townscape has been transformed thanks to Chinese investments," a Laotian official said.

From boomtown to bust

China has poured money into Oudomxay because it is on the way to Thailand and, by extension, Singapore. Chinese-built trunk roads look almost out of place in the relatively sparse surroundings.

Additional projects are underway. In September, construction started on a 140-meter building that will be Vientiane's tallest. The project is a joint venture between the Laotian defense ministry and Chinese companies. The building will house a hotel.

Still, some question just how much those investments are trickling down and benefiting regular Laotians. Another town to the north, closer to the border with China's Yunnan Province, provides a cautionary tale about the perils of relying on Chinese cash.

Boten, near the northern border, was once a small, quiet mountain village. In 2003, it was designated a special business and casino district. The population swelled to around 10,000 and tourists came in droves. Hotels with more than 200 rooms sprouted up.

However, in May 2011, the Laotian government ordered the casino's closure, on the grounds that it ran against national policy. It seems that Chinese authorities were also concerned about crimes involving indebted Chinese gamblers.

Thereafter, Chinese business owners, including hoteliers, were quick to withdraw and the town rapidly lost its luster. Today, the casino looks forlorn, with cracked window panes and overgrown weeds.

"We need to entice investment not only from China but also from other countries," said a Laotian government official in charge of special economic zones. For the time being, though, Laotian localities will have to try to make the most of the yuan that flows in.