LUANG PRABANG, Laos -- An ambitious $6 billion high-speed railway project in Laos that would link China with the Laotian capital of Vientiane on the Thai border is meant to be a symbol of cooperation under Chinese President Xi Jinping's flagship Belt and Road Initiative. But with Beijing calling the shots and leaving out locals, it has instead become another example of the pitfalls faced by small Southeast Asian countries in relying economically on their much larger neighbor.

Situated about a 20-minute drive from this ancient former capital of Laos is a construction site that could be described as a little China. Workers' conversation is all in Chinese, as is an instruction manual for heavy machinery resting on a drum. No one at the site, not even the foreman, can speak the local language.

One worker, asked where he hailed from, curtly replied "China," adding that he was there only because his boss told him to go.

Pictures posted on the fence around the construction site portray the railway scheduled to open in five years -- a track winding through the mountains here, a bridge over the Mekong River there, and a sleek white train car. Also scattered around are slogans in bold print: "Belt and Road Initiative" and "win-win through cooperation." 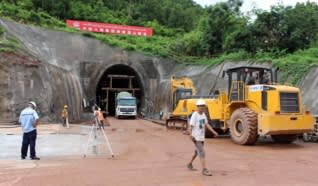 Chinese companies have taken the lead on construction of a high-speed railway in Laos.

The latter evokes images of the two nations working hand in hand. Yet such collaboration is not evident at the site.

Initial estimates indicated that building the railway would require 100,000 workers. For Laos, which lacks much notable industry aside from exporting hydroelectric power and mining such resources as copper and bauxite, this seemed like a golden opportunity to spur new activity and create jobs.

But these hopes have been dashed. All of the construction work was handed off to China Railway Group, and Chinese engineers and laborers have descended on the country in droves.

Not even the Laotian government is clear on the exact number of Chinese workers in the country. "We want to use local labor as much as possible, but ... " lamented Lattanamany Khounnyvong, vice minister of public works and transport, whose purview includes the rail project.

Lattanamany was alluding to the massive leverage held by China, which is shouldering 70% of the cost of the project. With no experience with railway construction, Laos "has no choice but to depend on China" for technology and personnel, Lattanamany said.

The project itself was an economic stretch for Laos to begin with, argued Norihiko Yamada, a Vientiane-based senior overseas research fellow at the Japan External Trade Organization's Institute of Developing Economies.

Because of the country's mountainous terrain and many rivers, the project entails building dozens of tunnels and some 170 bridges. The total cost is nearly twice the Laotian government's $3.6 billion annual budget. How necessary the railway is for a country with a population of just 6.9 million is debatable.

The government is responsible for 40% of Laos' share of the costs, or $730 million. It is borrowing 65% of this sum from China -- a debt that will be burdensome to repay.

The government expects the railway to turn a profit in six years. Lattanamany said this revenue can be used to pay off the debt within 30 years of the project's completion, but he was vague on the basis for this projection. The vice minister also dodged the question of development along the railway, saying nothing has been decided yet.

This risky scheme has been driven by China's Belt and Road Initiative. The project had been slow to get moving amid skepticism in China, but progress picked up once President Xi Jinping began touting the "Belt and Road" slogan. Beijing's ultimate goal is believed to be 3,000km of rail running from Laos to Singapore via Thailand and Malaysia -- a grand vision that would position Laos as a gateway to Southeast Asia.

The railway will enable Luang Prabang residents to reach Vientiane, now a day's travel away by bus, in two to three hours. And the direct link to China has the potential to transform how goods and people travel.

The flood of money unleashed by the Belt and Road Initiative is already changing Laos. In the last few years, Chinese companies have completed a large shopping center in Vientiane and built luxury condominiums in the That Luang Marsh Specific Economic Zone nearby. China was by far the top investor in Laos between 2011 and 2015, spending $2.5 billion to No. 2 Thailand's $1 billion.

Yet economic dependence on China can carry serious drawbacks. In Cambodia, China's status as the country's largest foreign investor has accorded it substantial political influence. Phnom Penh has shown a degree of deference to Beijing in comments on territorial disputes in the South China Sea. The Association of Southeast Asian Nations as a whole risks going down the same path, as countries such as Thailand and Indonesia grow more reliant on Chinese money.

For now, it is impossible to tell how the railway will ultimately affect Laos. A 64-year-old woman running a noodle shop at a railway construction site expressed hope that it will be finished within her lifetime. "I want to go to Kunming [in neighboring Yunnan Province], where my son is studying," she said.