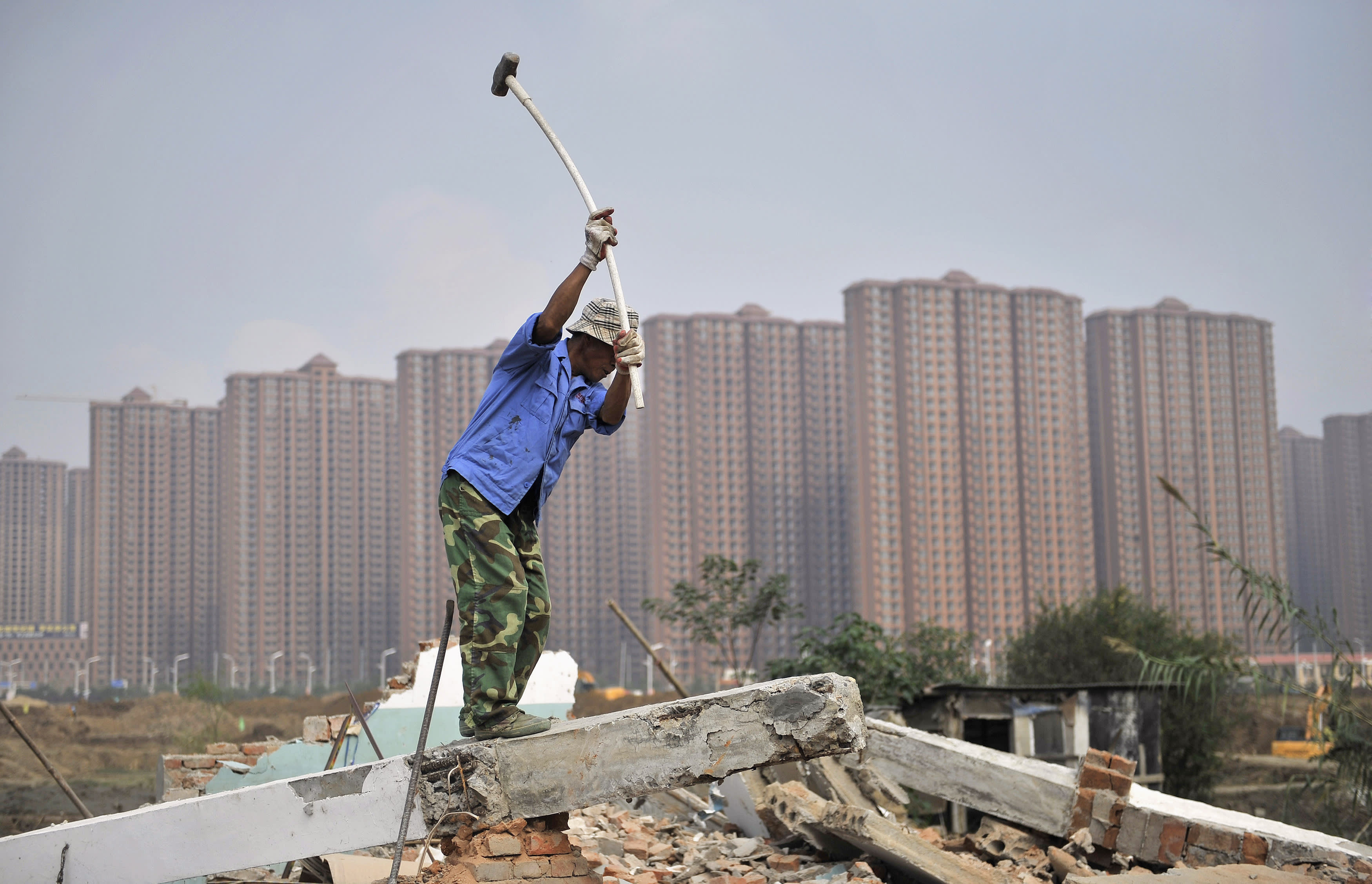 SHANGHAI/HEFEI, China -- A neglected condominium complex in the Anhui Chaohu Economic Development Zone starkly symbolizes China's debt worries, especially at the local government level. The dirty tiles and cracked concrete make the building look older than its five or so years. On the first floor, garbage piles up in front of an empty store.

As the trade war with the U.S. constrains the Chinese economy, attention is shifting to the issue of overborrowing. But while the government tries to jump-start the economy out of the slump, the size of hidden local government debt, which has ballooned to 40 trillion yuan ($6 trillion) according to one account, does not bode well for the country. This crushing debt is in addition to on-balance sheet borrowings, which are listed at over 18 trillion yuan as of the end of September.

People living near the condominium told Nikkei that units sell for about 4,500 yuan ($650) per sq. meter, meaning a price tag of $90,000 for a three-bedroom unit -- a pretty good deal, even if it is a four-hour, high-speed train ride from Shanghai. However, the developer did not pay the construction company so the building was put up for auction in early 2018, but there were no bidders.

The failed condo is just one manifestation of the country's debt problems. In a rare show of transparency by government, the city of Hefei, capital of Anhui Province, shocked observers by announcing on Aug. 10 that the hidden debt of its economic zone was 330 million yuan, which likely includes land payments that it can never repay. Even more shocking was Hefei's disclosure that the city itself had hidden debt of 47.5 billion yuan, about 70% the load of its 65.6 billion yuan on-balance debt.

S&P Global Ratings' report on Oct. 16 shed light on the nationwide issue, stating that off-balance sheet debt in local governments could be as high as 40 trillion yuan, mostly in the form of local government financing vehicles, or LGFVs. Gloria Lu, an S&P credit analyst, notes that progress toward solving the issue "has been limited so far," and that the "potential amount of debt is an iceberg with titanic credit risks." LGFVs arose when governments started borrowing to meet growth targets. And when the combination of tax revenues and bond issuances still fail to provide enough to make ends meet, local governments turn to LGFVs for their on- and off-balance funding, according to S&P.

S&P's figures may not be far off the mark. Suning Financial Research Institute, an affiliate of local retailer Suning.com, estimated that hidden local government debt nationwide stood at 30.1 trillion yuan at the end of 2017. This grew to 32 trillion yuan by the end of July 2018, according to data gathered from LGFVs. Even Yu Yongding, a prominent economist at the state-run Chinese Academy of Social Sciences, cited 23.57 trillion yuan as his estimate of hidden debt in an interview with a local magazine Caijin.

The different figures depend on how much principal and interest local governments pay, which is not clear. The governments are not technically obliged to settle bad debts. But investors believe otherwise, as officials have long hinted at the existence of tacit support of LGFVs. Moreover, denying any connections to LGFVs could risk a credit crunch. In January, a troubled LGFV in the southern province in Yunnan received financial support from the provincial government, further complicating the issue.

Whatever the actual amount of hidden debt, it is much larger than on-balance sheet borrowings, which are listed at over 18 trillion yuan as of end of September, according to the Minister of Finance.

In the meantime, the economy continues to slow, with real GDP growth for the third quarter at 6.5% year on year. This is still within the targeted range but less than market expectations.

Other data announced last Friday reveals a slightly different picture. The government said retail sales in September grew about 6% in real terms, down nearly 3 percentage points from a year earlier. But if we exclude small and midsize retailers, which uses estimated figures, and confine the figure to sales of bigger retailers, who report real data, the actual increase was closer to 5.7%. As China's soybean imports decrease amid the trade war with the U.S., feed prices are expected to increase.    © Reuters

The slowdown in consumer spending reflects less disposable income, which is down nearly 1 percentage point on year to 6.6% for the first nine months. Consumers fear rising prices, notably in the cost of pork, which is tied to soybean feed costs that are expected to shoot up later this year. If the country's outbreak of African swine cholera cannot be contained, pork prices could rise even higher.

Against this backdrop, Beijing has been loosening monetary and fiscal policy. China's total social financing -- a gauge of aggregate volume of funds raised including stock and bond issues -- came to more than 2.2 trillion yuan in September, the highest since January.

Most analysts deny an impending financial collapse on the assumption that the central government would step in to avoid catastrophe. Martin Petch, senior credit officer at Moody's Investors Service in charge of China's sovereign ratings, acknowledges that the huge debt "is definitely an issue" but does not see it as "destabilizing in a general sense at this point in time."

Petch told Nikkei that the "capability of the central government in dealing with those issues, whether system stability in the financial sector or more broadly, is very strong," citing ample domestic savings as one of his reasons.

However, bigger debt is accompanied by huge funding requirements for interest and future refinancing. If total social financing in September is the first sign of this, China's debt problem may drag on, dragging the economy down with it.