Pay increases trail productivity, putting any declaration of victory on back burner TOKYO -- Meager growth in pay for Japan's workers sank a crucial yardstick for the fight against deflation into negative territory during the October-December period, dampening some long-awaited optimism achieved in the previous three months.

In the last three months of 2017, the nation's unit labor costs -- nominal wages divided by gross domestic product -- shrank year over year for the first time in nine quarters as a result of sluggish growth in pay compared to GDP.

"It will be difficult to escape deflation unless businesses raise wages correspondingly to improvements in productivity from work reform," said Satoshi Osanai, senior economist at Daiwa Institute of Research.

Defeating deflation is a major objective of Prime Minister Shinzo Abe's signature "Abenomics" policies, geared to stimulate Japan's economy and break free from the country's long-running slump. Abe has been pressing Japan's companies to do their part by increasing wages.

Optimism grew when all four metrics for tracking deflation read positive in the July-September quarter -- a rare alignment. Japan's consumer price index and GDP deflator, which track price movements in the economy overall, have stood in positive territory for two quarters through December, while the GDP gap has shown a growing surplus of aggregate demand relative to supply. 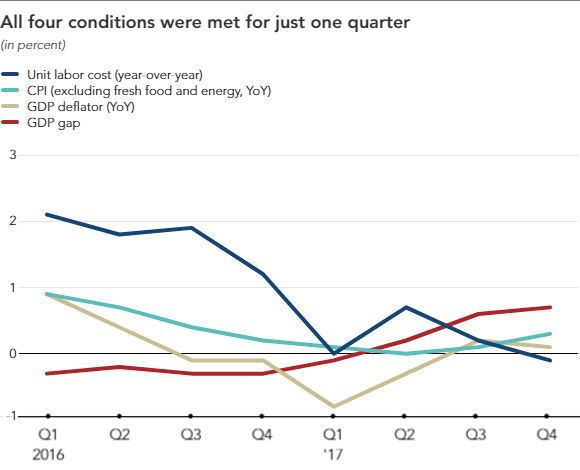 The Cabinet Office also reported in March's economic assessment that consumer prices are "rising moderately in recent months," an improvement from February's assessment of "flat."

The July-September alignment of positive readings led the Cabinet Office to declare that Japan had entered a new phase in defeating deflation, during a November meeting of the Council on Economic and Fiscal Policy. But after the dimmer reading for the October-December period, the office told the council in March that the escape from deflation was still ongoing.

The office chose the four metrics in March 2006 as the Bank of Japan concluded a program of quantitative easing. It also defined an end scenario for the "D word" as reaching a point where the prices of goods are not continuously declining and no risk exists of returning to such a state.

But the four indicators "were created as a check against abrupt tightening," said a source close to the matter. "To some degree, we have tied ourselves down with overly restrictive conditions." The "no risk of returning" stipulation is considered especially difficult to fulfill.

Spring negotiations between unions and management yielded broad movement toward higher wages, but the country will "need to wait until around summer" to see the results, a Cabinet Office official said.

It is unclear whether the task of judging and declaring victory over deflation falls to the Cabinet Office through its monthly reports or to the Council on Economic and Fiscal Policy. One widespread view holds that the administration would make the call.

"The Shinzo Abe administration aims to continue both financial easing and fiscal stimulus," said Ryutaro Kono at BNP Paribas Securities (Japan). This means the most convenient stance may be that Japan is "out of deflation but not yet to the point of declaring victory," he said.

Should the government claim an end to deflation and a win for its economic policy, it would appear inconsistent with the Bank of Japan's ongoing large-scale monetary easing.

Capital needs are low as the yen is appreciating and business investment remains "relatively timid," said an official at Societe Generale. "There are fears that returning to monetary tightening could cause Japan's economy to slip back into deflation," the official said.