KUALA LUMPUR -- Malaysia and Singapore signed a final agreement Tuesday to build a high-speed railway connecting the two countries' capitals. The project, which will involve international tenders and construction of a third cross-border bridge, is expected to give their economies a lift.

The document on the Kuala Lumpur-Singapore high-speed railway formalized project details including technical, safety and security requirements; financing; procurement; regulatory frameworks; and immigration arrangements. The leaders said the agreement marked a "historic moment" in bilateral relations, six years after the project was first mooted by Malaysia as part of an economic development plan. 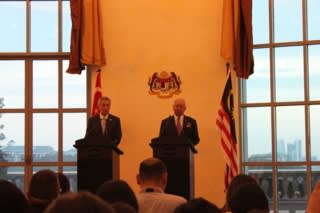 The 350-kilometer railway, which is slated to begin operating by the end of 2026, will have three services: a Kuala Lumpur-Singapore express service, a shuttle service between the southern city of Johor Bahru and Singapore, and a domestic service between towns in Malaysia.

Najib said high-speed rail "will change the way we conduct business, move people and lifestyles between our two countries."

Under the deal, Malaysia and Singapore will be responsible for building infrastructure in their respective territories and jointly solicit two international tenders by the end of 2017.

One is for an asset management company that will operate railway systems, including rolling stock, tracks, power, signaling and telecommunications. The other is for an operator to run the express train between Kuala Lumpur and Singapore, and the shuttle service.

Separately, Malaysia will tender bids to manage a domestic service linking the capital to six other towns in the south of the country.

International bidders from countries such as China and Japan are expected to participate in the project, the first of its kind in Southeast Asia.

The high-speed railway will link Bandar Malaysia in the Malaysian capital, to Putrajaya, Seremban, Ayer Keroh, Muar, Batu Pahat and Iskandar Puteri, before terminating at Jurong East in Singapore via a bridge over the Straits of Johore.

Designed to reach a theoretical maximum speed of 350kph, the train will have a maximum operating speed of 320kph and run on a double track with a single gauge. It will cut travel time between the capitals to 90 minutes, compared with nearly five hours by car.

The railway is a key project in the 11th Malaysia Plan of 2016-2020, which aims to turn Malaysia into a high-income economy. It will be undertaken amid an economic slowdown in the country, which has been hit by falling commodity prices and market uncertainty in China, its largest trading partner.

Under the five-year plan, Malaysia hopes to raise its gross national income per capita from around $10,570 in 2015 to $15,690, joining Singapore in the region's high-income club. One of the aims of the program is to improve the competitiveness of Kuala Lumpur and Iskandar Malaysia in Johor Bahru, capital of the state of Johor. The plan entails the creating a transit-oriented development to urbanize the city and surrounding areas.

"If Iskandar Malaysia prospers, so [will] Singapore," Lee said, adding that his country is the second-largest foreign direct investor in the special economic region.

Over the past 10 years, Malaysia has been developing Iskandar Malaysia, inspired by the Chinese city of Shenzhen across the border from Hong Kong. Malaysia has poured in billions of dollars, hoping to draw investment into sectors such as manufacturing, petrochemicals, education, tourism and film production.

Export-oriented Singapore is also struggling with sluggish growth in key trading partners such China and low crude oil prices. The city-state recently cut its economic growth forecast for 2017 from 2% to 1.5%.

At Tuesday's meeting, the two countries also discussed a rapid-transit link to improve connections at the border through a line in Singapore called the Thomson-East Coast Line.