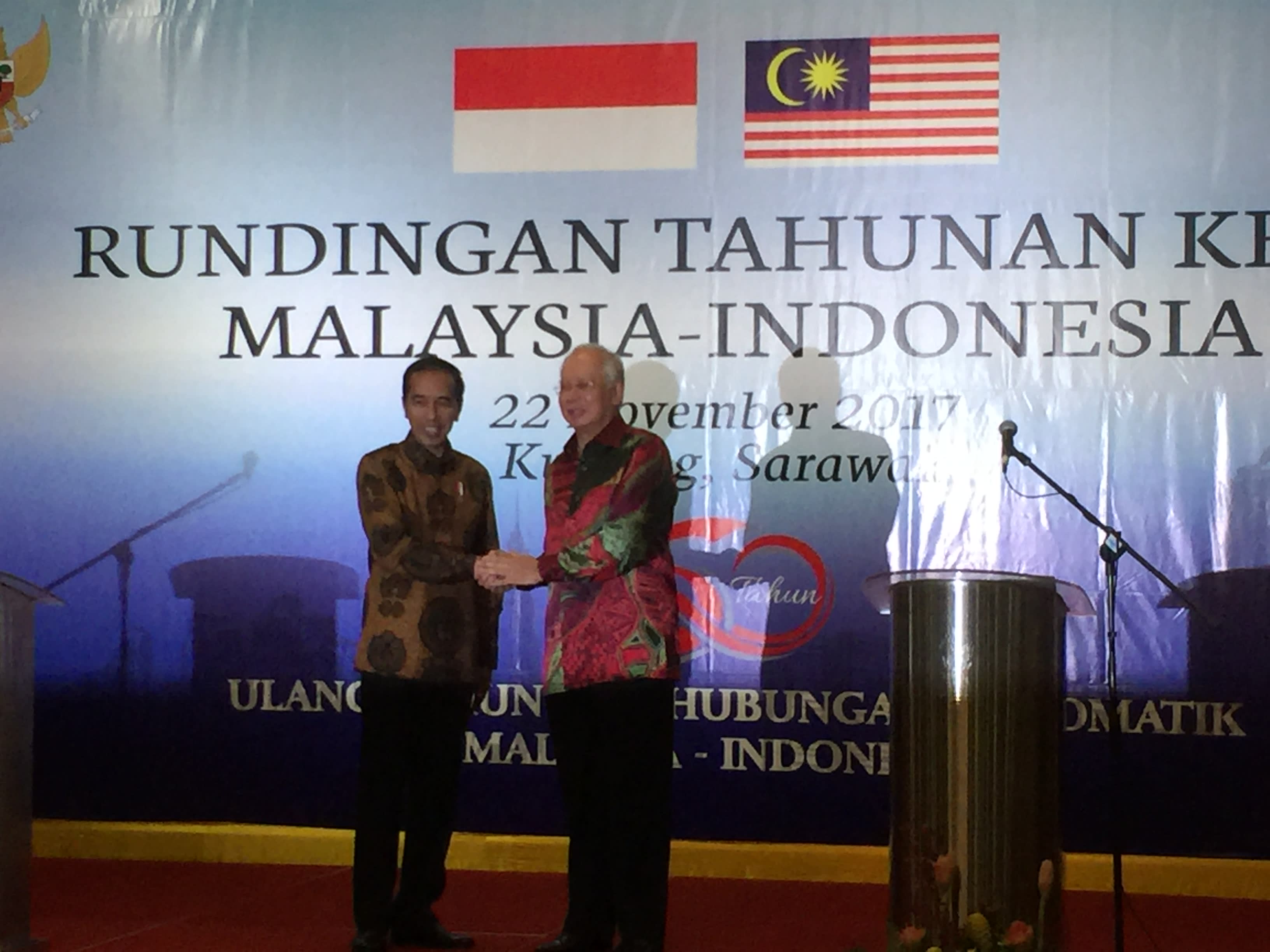 KUCHING, Malaysia -- The leaders of Malaysia and Indonesia said on Wednesday that they have agreed in principle to establish more trading points  along their border on the island of Borneo to strengthen bilateral ties.

At an annual meeting in Kuching in the Malaysian part of Borneo (Kalimantan), Prime Minister Najib Razak discussed with President Joko Widodo the possibility of opening up more border checkpoints to facilitate the movement of goods and people.

The shared border in Borneo runs for 2,000 km but sees negligible trade because of the lack of crossings and development in general in the island's interior, most of which is rainforest and plantations.

The Malaysian government has proposed joint development, including a free trade zone and high-value agricultural activities along the border to spur economic growth. This can only be taken forward after the two countries sign cross-border trade agreements that are expected in the first quarter of 2018. The two existing crossings link the Malaysian towns of Tebedu and Tawau with Entikong and Nunukan respectively in Indonesia. Indonesia and Malaysia fire back at EU in palm oil war

"Trade between Indonesia and Malaysia grew by 21% in the first half of this year -- a very big increase," Widodo said at a joint news conference.

Both countries hailed their closer relationship in tackling issues of common interest. This included a joint response to a resolution passed in April by the European parliament to erect stricter barriers to palm oil imports by 2020. Both countries regard the resolution as discriminatory and likely to adversely affect the livelihood of millions of palm oil growers.

"The resolution is not fair and should not proceed," said Najib. He said the Malaysian government had already communicated this view to European envoys in Malaysia, and Indonesia would follow suit soon.

"We are united in overcoming the issue with Malaysia," said Widodo.

Both countries have Muslim majorities, and agreed to recognize each other's halal certificates by mid 2018 to ease business procedures. Currently, exporting companies need to apply for certificates and adhere to local standards in order to sell food and cosmetics to the Muslim market.

Widodo also welcomed Malaysia's move to allocate 20% (150,000 tons) of its annual import quota to Indonesia. Imported rice, mainly from Thailand and Vietnam, accounts for about a quarter of Malaysia's consumption and is priced at the market rate. Local rice is subsidized.

In a joint statement, both leaders condemned North Korea's nuclear and ballistic missile tests, and expressed "grave concerns" about the escalation of tensions on the Korean peninsula that could affect peace and stability in Southeast Asia.