Other Southeast Asian nations face being stuck in middle-income trap KUALA LUMPUR -- Malaysia is on track to achieving high-income status, according to the World Bank, while many of its Southeast Asian neighbors face the prospect of being caught in a middle-income trap.

"Malaysia is well on its way to cross the threshold into high-income and developed country status over the coming years," Victoria Kwakwa, the World Bank vice-president for East Asia and Pacific, said this month after meeting Prime Minister Mahathir Mohamad.

"As long as the country does not face growth stagnation, it is inching toward the high income level as defined by the World Bank," said Yeah Kim Leng, Professor of Economics at Sunway University Business School in Kuala Lumpur. "Hence, it's a question of when, give or take a couple of years, as long as it is able to sustain its current growth momentum."

The organization believes that many of Asia's middle income countries such as Indonesia, the Philippines and Thailand "can realistically aspire to high-income status in the next generation or two."

Thailand's GNI per head of $5,960 exceeds that of Indonesia or the Philippines -- both around $3,600 -- and the military government hopes to attain developed economy status by around 2036. 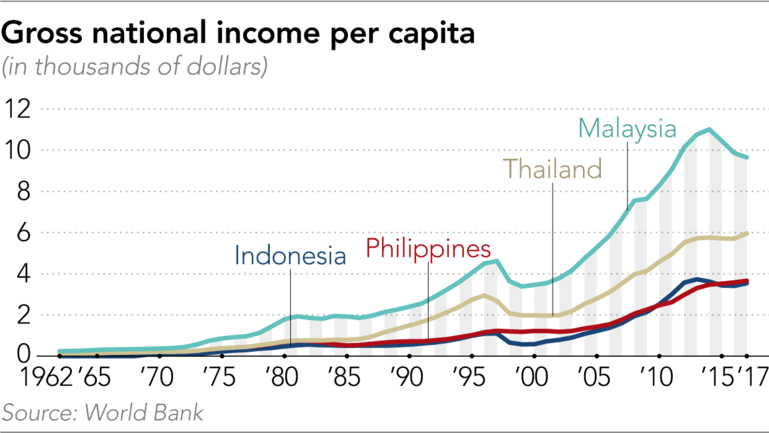 Only a handful of Asian economies have risen to high income status in recent times. These include South Korea and Taiwan (manufacturing bases), Hong Kong and Singapore (small trading hubs) and Brunei (oil rich).

That so few have managed to make the jump highlights the difficulties larger countries face in escaping the middle income trap. There is no standard definition of the trap, but some academics regard nations as mired in middle income status if they spend five decades or more with average incomes of 10% to 50% of U.S. levels.

The middle income trap occurs when rising wages mean a country loses a price edge for exports but the economy is unable to move up to more value-added production.

"For productivity to grow, it requires a lot of structural changes," said Kensuke Tanaka, head of the Asia desk at the Organisation for Economic Co-operation and Development, which numbers among its members most of the world's high income countries.

The trap is acquiring something of a stigma in Asian countries that are struggling to catch up on wealthier neighbors.

"We must not be trapped in a status of a middle-income country," Indonesian President Joko Widodo stated in a national address in August, "We must succeed in becoming a developed country."

After his election in 2014, Widodo set a GDP growth target of 7% a year, but the actual figure has hovered around 5%.

Such growth rates could help the three countries slowly catch up to Malaysia, which outpaced its neighbors since the 1980s after successfully developing a manufacturing sector -- as well as maintaining a commodities- and services-oriented economy, according to Siwage Dharma Negara, an Indonesian economist at the ISEAS-Yusof Ishak Institute in Singapore.

"Indonesia depends much more on commodities and, compared with manufacturing growth a couple of decades ago, appears to be suffering premature de-industrialisation," Negara said.

The Philippines, said Negara, shares a common challenge with Indonesia in that it is a large archipelago with formidable logistical hurdles and infrastructure needs, making it hard to distribute growth around islands.

The Asian Development Bank said that to move up the economic ladder, Thailand needs to improve education and invest in research and development rather than just import technology or rely on the manufacturing-based model that has driven growth since the 1980s.