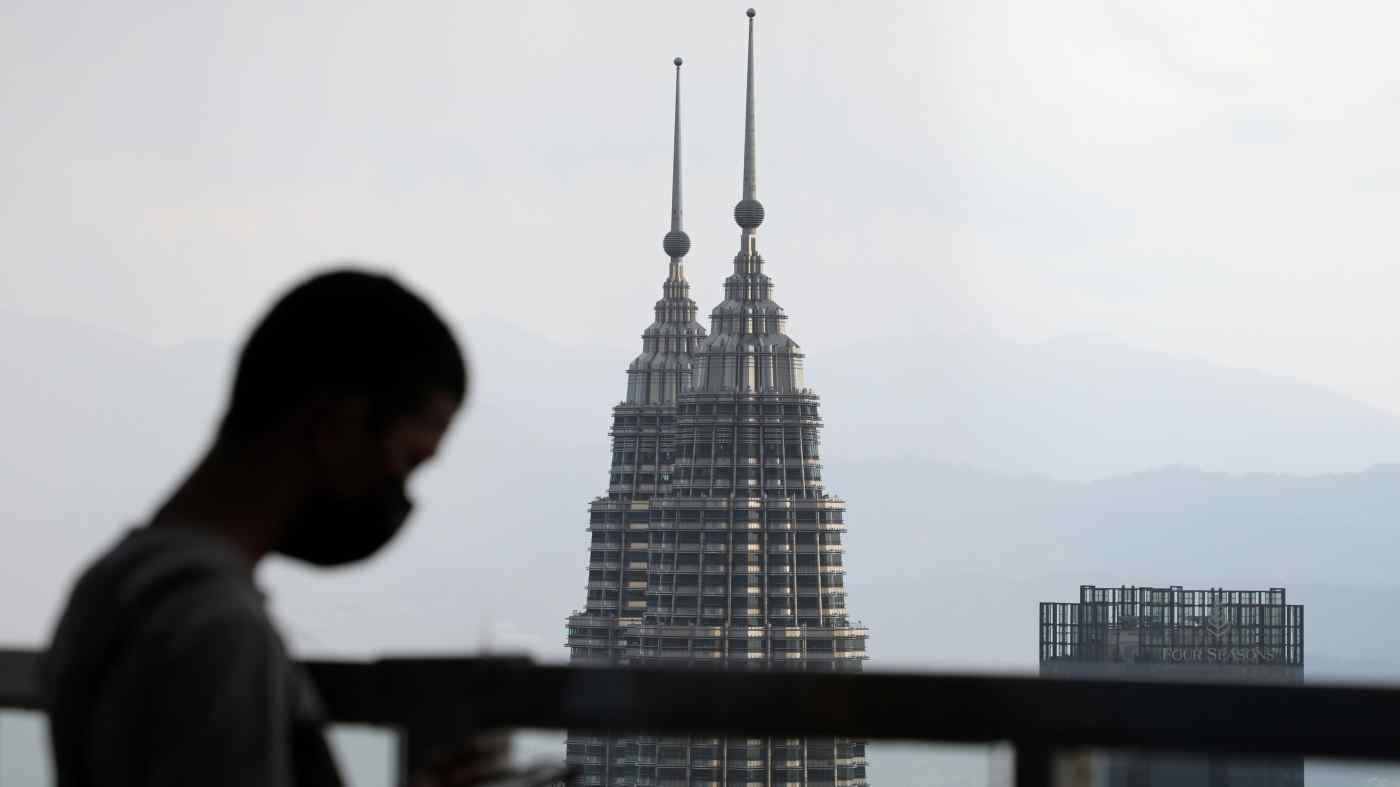 KUALA LUMPUR -- The Malaysian economy grew 16.1% on the year in the second quarter of 2021, the central bank announced on Friday -- a consolation for a Southeast Asian country facing relentless COVID-19 infections, lingering movement restrictions and persistent political uncertainty.

But at the same time, the bank issued a reality check by sharply cutting its full-year gross domestic product growth target to 3.0% to 4.0%, versus the initial 6.0% to 7.5% range.

The result for the April-June period marks the first GDP growth since the first quarter of 2020, when the economy expanded 0.7%. The latest figure marks a correction from the steep 17.1% decline in the corresponding second quarter of last year. It comfortably beat a median estimate of 20 economists polled by Reuters, who had predicted 14.3% expansion for the second term of 2021.

"Economic performance was supported mainly by the improvement in domestic demand and continued robust exports performance," Bank Negara Malaysia Gov. Nor Shamsiah Yunus said. "The strong growth also reflected the low base from the significant decline in activity during the second quarter of 2020."

She went on to say that while activity picked up early in the second quarter, it slowed down thereafter, following the re-imposition of stricter COVID-19 containment measures nationwide. This weighed on growth, she said, though "greater adaptability to restrictions and ongoing policy support have partly mitigated the impact."

Malaysia's Ambank Research, which had estimated second-quarter growth between 11% and 13%, said in a note that the expansion was supported by higher industrial production and exports. Industrial production was up 25.9% in the second quarter, compared to 4% in the first, while exports rose 44% year on year. But much remains uncertain.

"The outlook for the second half of 2021 will depend on the vaccination speed, management of COVID-19 cases, reopening of the economy, stimulus measures and domestic stability," said the research house.

Malaysia's pace of vaccinations has picked up considerably, with around 30% of the population having received two doses and another 21% or so having had one, according to Our World in Data.

But since COVID-19 was detected in the country in February 2020 and the government imposed its first movement control order that March, Malaysia has never fully reopened. Its major economic center, the Greater Klang Valley which includes Kuala Lumpur, remains under a lockdown where non-essential businesses are not allowed to operate. Department of Statistics data shows unemployment hit 4.8% as of June 2021 -- equivalent to about 770,000 people -- and the restrictions remain a serious drag on an economy that depends heavily on micro, small and midsize enterprises.

Hence the much weaker outlook. "The new [full-year] growth projections are lower compared to the previously announced growth range due in large part to the re-imposition of nationwide containment measures," Nor said.

"Malaysia's growth recovery is expected to broadly resume in the later part of the second half of 2021, and improve going into 2022. A key catalyst for economic reopening and a driver of positive sentiment will be the continued progress and effectiveness of the national vaccination program, which would alleviate the strain on health care system capacity and allow for the relaxation of containment measures."

For now, despite the economic sacrifices, the country is still fighting a deadly COVID-19 wave that has stretched hospitals to the limit. Malaysia reported a record 21,668 cases on Thursday. Almost 1.4 million have been diagnosed since the start of the pandemic, of which 250,000 are active. About 11,500 deaths have been blamed on the virus.

Since March 2020, the Muhyiddin Yassin-led government has dished out almost 530 billion ringgit ($127 billion) in various economic stimulus packages to soften the pandemic's impact. Adding to the pall over the economy, however, is the prime minister's own hazy future. After repeated attempts by the opposition and erstwhile coalition allies to bring down the government, Muhyiddin is currently expected to face a no-confidence vote in parliament on Sept. 7.

Neighboring Singapore earlier this week revised up its second-quarter GDP growth to 14.7%, and also upgraded its full-year forecast to 6% to 7%. Elsewhere in Southeast Asia, the Philippines reported quarterly growth of 11.8%, Indonesia logged 7.1% and Vietnam 6.6%.