KUALA LUMPUR -- Billy started smoking as a college student 30 years ago. Until recently, he was getting through as many as nine packs a week. In November, after the price of a pack of his favorite brand rose to 17 Malaysian ringgit ($3.89), he quit.

Now the 49-year-old Malaysian project manager gets his nicotine hit through electronic cigarettes, or vaping. It is cheaper, but Billy also thinks it is less dangerous. "The price rise was an excuse," he said over coffee near his office in a suburb of Kuala Lumpur. "I wanted to quit. I wanted to try this vaping out. I changed really for health reasons."

Billy's story reflects a global debate over vaping, as governments struggle to reconcile evidence that it poses much lower health risks than conventional cigarettes with counter-claims that it may be just as dangerous and acts as a gateway to tobacco smoking.

Singapore and Thailand have banned vaping, while sales of e-cigarettes remain largely free in the U.S. and the U.K. Other territories have opted for regulation short of a ban; the European Union, which includes the U.K., will introduce revised rules in May, including a maximum concentration of nicotine for liquids.

However, Malaysia faces two additional problems. One is that amid pressure from Muslim leaders and some health activists, bans on e-cigarettes have already been announced in several of the country's 13 states. In the weeks leading up to January -- when bans came into force -- state authorities in Johor and Kelantan raided hundreds of shops, seizing equipment and liquids. In the central state of Negeri Sembilan, Muslims were told to stop vaping after Malaysia's National Fatwa Council declared electronic cigarettes "haram," or forbidden, in Islam. A fatwa has long existed on smoking.

The second problem is that the rapid growth of vaping has created a major new industry of producers, distributors and retailers serving at least half a million of Malaysia's 4.6 million smokers, according to Hong Leong Investment Bank, a local bank. Most of the companies involved are small and medium sized businesses that could face extinction if a national ban is imposed. Conversely, tobacco companies and manufacturers and retailers of anti-smoking aids such as nicotine pouches are threatened if vaping survives.

The Malaysian E-Vaporizers and Tobacco Alternative Association (MEVTA), which represents about 200 vaping-related businesses, estimates that sales reached 2 billion ringgit in 2015. The industry has also begun to export to countries such as Indonesia and China, according to MEVTA.

The organization says Malaysian companies produce as many as 2 million bottles of e-liquid each month, which they sell for between 30 and 35 ringgit each. Vapers tend to get through about four bottles a month.

Fear of the unknown

Vaping Empire has been in business for only two years, but is now one of Malaysia's biggest retailers, with more than 60 stores nationwide and a thriving online trade catering to local and overseas customers. It stocks a range of vaping equipment, makes its own liquids -- developed to cater to Malaysians' taste for the fruity and sweet -- and also imports other flavors from the U.S. and Europe.

The company opened a shop in the U.K. last year, and has plans to expand in continental Europe and elsewhere in Southeast Asia in 2016. Alongside its global ambitions, however, Vaping Empire is preparing for regulation in its home market. 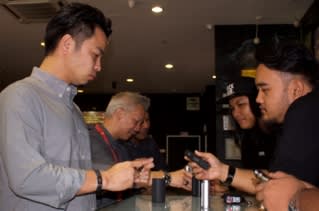 "The main issue is the nicotine levels in the liquid," said group chief executive Muhammad Sharifuddin Esa, 30, who set up the business with three partners and 10,000 ringgit. It generated more than 60 million ringgit in revenue last year. "When everything is legal, then everything is safer."

Allan Foo, president of MEVTA, said Malaysia's policymakers "have no idea" how to regulate the industry. "There's a hoo-ha because of fear -- fear of the unknown, the possibilities and the threat [to existing industries]," he said, exhaling large clouds of vapor between sentences. "Every new technology brings a new fear."

However, MEVTA says it is prepared for the likely imposition of taxes on vaping, as well as new licensing rules, which it acknowledges would provide some reassurance to customers. "We're asking for regulation," said Vice President Ikhbal Zakaria, who owns 11 vaping shops. "We are asking for tax. We are open to discussion."

Plenty of influential voices are calling loudly for rules that would limit the growth of the industry, if not kill it. "Tobacco ensconced itself firmly in our culture long before there was any awareness of its risks, and getting it 'unensconced' will take time and a generational shift," said Dr. Ashok Philip, president of the Malaysian Medical Association. "It is not too late to nip e-cigarettes in the bud, though, with the requisite political will."

Others point to a U.S. study published in the journal Oral Oncology in December, which suggested that vaping could be linked to cancer -- a view endorsed by Malaysia's Ministry of Health. "To date, there is no conclusive scientific evidence to suggest vaping is beneficial for smoking cessation," Dr. Noor Hisham Abdullah, director general of health, said in a statement to the Nikkei Asian Review.

"There is no country in the world that has formally adopted vaping for smoking cessation," he said. "In addition to this, there is more and more emerging scientific evidence on the harmful health effects from inhaling aerosols of heated e-liquid or vape."

The federal government's position is unclear. At the end of October, local media reported Rural and Regional Development Minister Ismail Sabri saying the cabinet had decided not to prohibit vaping, days after Health Minister S. Subramaniam said a ban was possible. Subramaniam told reporters at the parliament building, "If it was up to me, I will ban it as soon as possible. I feel we have to put a stop to this before it becomes a big issue," according to The Star.

Deputy Health Minister Hilmi Yahaya later suggested that regulation allowing continued sales was more likely. "At present, we have only laws governing tobacco, but we are looking at new laws to cover vaporizers, tobacco and shisha [pipes],'' he said, also according to The Star. Amid the confusion, the federal government is expected to announce a decision on regulation by the end of January.

The only certainty appears to be that any outcome short of an outright ban will hurt the tobacco companies, already facing pressure from health lobbyists and sales of fake products. In Malaysia, a third of all cigarette sticks sold are estimated to be counterfeit or smuggled, according to British American Tobacco Malaysia.

In the past, price rises would have prompted smokers to opt for cheaper brands, but vaping has given them an alternative that is both affordable and perceived as less dangerous. The price rise that prompted Billy to switch came after the government increased excise duty by more than 40%.

"Switching from smoking to vaping is a reality," wrote Low Yee Huap, head of research at Hong Leong. "This [is] expected to exert further pressure on already dwindling volumes in the legal tobacco industry. The entrance of vaping into the market territory of the traditional tobacco industry is a threat."