Condominium blocks that are fully sold out are marked by signs at the Country Gardens' Forest City showroom in Johor Bahru, Malaysia.   © Reuters
Economy

Malaysians believe it is a bad time to buy property

Consumers concerned over state of economy despite rise in growth

FTCR's Malaysia Property Buying Sentiment Index fell 9.4 points to 29.3 in the fourth quarter, with a majority of the 1,000 Malaysians surveyed in the period believing it was a bad time to buy property (see chart). 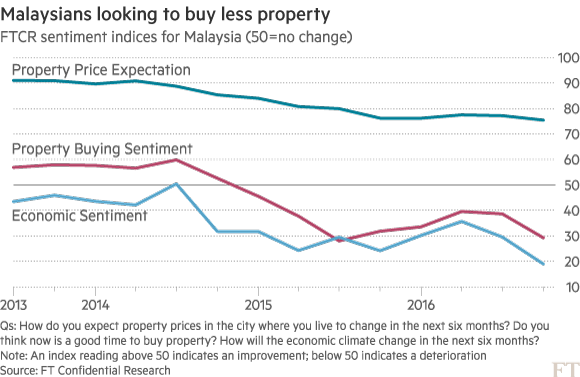 Concern over the state of the economy was cited by half of respondents as the reason. Indeed, overall confidence among consumers is very low: our Economic Sentiment Index fell 10.6 points quarter-on-quarter, indicating that Malaysians believe the economic situation will deteriorate in the next two quarters.

These findings come in spite of accelerating economic growth. Fourth-quarter gross domestic product rose 4.5 per cent year-on-year after rising 4.3 per cent from July to September. We think this highlights the unevenness of Malaysia's economic performance, in which unemployment has not responded to stronger growth: unemployment was around 3.5 per cent, compared with 2.7-3 per cent before a slowdown that began in 2015.

The pessimistic sentiment is also moderating expectations for property price rises in the next six months. Our forward-looking Property Price Expectation Index fell 1.7 points quarter-on-quarter to 75.4 points in the fourth quarter.

The pessimism is reflected in the latest (albeit lagging) official data from the National Property Information Centre (Napic), a government agency tracking property transactions nationally. Home price growth slackened to 5.3 per cent year-on-year in the third quarter of 2016, from 6.9 per cent in the second quarter. At the same time, transaction volume for residential properties fell faster, by 13.9 per cent in annual terms, after a 12.5 per cent year-on-year decline in the second quarter.

Consumers are not the only ones shunning the property market. We understand lenders are still reluctant to finance residential purchases. Based on data from the central bank, we estimate Malaysian banks approved only 42.3 per cent of total residential loan applications throughout 2016, 7.9 percentage points lower than in 2015. This approval rate is unlikely to return to its 2015 level this year. Meanwhile, overall loan growth in the banking system itself has been steadily decelerating, to 5.3 per cent year-on-year in December 2016 from 7.6 per cent year on year in January 2016.

That said, low-cost properties are doing better than higher-priced ones. Napic data indicate the volume of properties priced at Rm50,000 ($11,200) or below rose in the third quarter, unlike higher-priced units (see chart). We think this will not last, however. FTCR data - more recent than the official sources - indicate confidence among low-income households is also falling, even as this group generally views the housing market more favourably than those belonging to more well-off households (see chart). 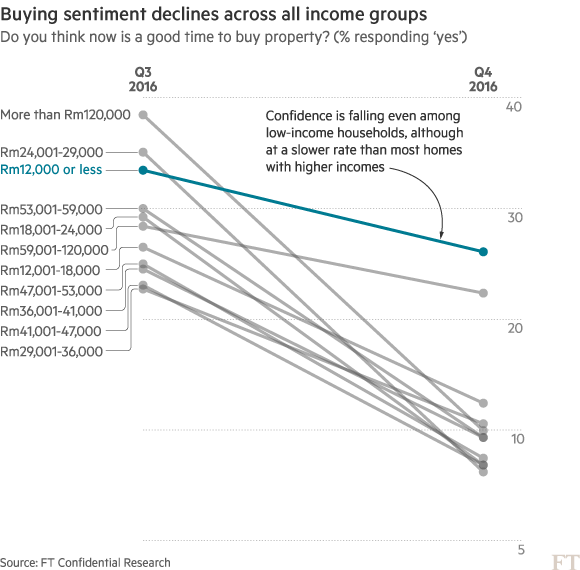 This article was first published on Mar. 1 by FT Confidential Research.