SINGAPORE -- Massive office complexes are going up in Kuala Lumpur. The initiative is the government's; the problem is that there are no guarantees foreign businesses will move into the new towers.

The result could be an office glut in the country's capital.

Even Nazir Razak, a leading banker and the younger brother of Prime Minister Najib Razak, has called for the government to reconsider the construction plans. Najib's government is banking on the new facilities to hook foreign businesses, but the policy is inherently risky.

In the center of Kuala Lumpur, two large abandoned buildings stand across a major street from each other. Construction began in the 1990s but halted following the Asian currency crisis of 1997. The exposed concrete exteriors are now stained from years of rain and humidity. They offer a stark contrast to the shiny facades of the rest of the business district. Though construction recently resumed on one of the buildings, the work is slow. 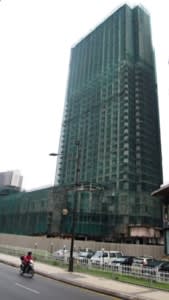 An office building in Kuala Lumpur, which has stood unfinished since the late 1990s

Ten minutes by car is Tun Razak Exchange, or TRX, an urban redevelopment project currently going up on a 0.3-sq.-km lot. The goal of the project, initiated by a government-owned developer, is to attract foreign financial institutions.

The first phase is scheduled for completion in 2017 or 2018. The project, however, already has a tainted reputation. "It's too big, and I'll be curious to see if all the offices can be filled," said a representative at a Japanese financial institution doing business in Malaysia.

TRX is named after Najib's late father, who was Malaysia's second prime minister, serving in the 1970s. Despite the current prime minister's attachment to the project, no one knows if tenants will come.

Malaysia plans to join the ranks of developed nations in 2020 and have a service sector-driven economy. TRX is meant to symbolize this ambition.

Meanwhile, in another part of Kuala Lumpur is the Warisan Merdeka, another state-sponsored project that if completed as planned by 2015 would boast of a skyscraper more than 100 stories high and the tallest building in Malaysia.

DTZ, a property market research company, says that, despite the Malaysian office market being stable right now, uncertainties lie ahead. The Malaysian realty market currently has a balance between supply and demand. But if government-initiated office building construction keeps up at the same pace, this equilibrium will be lost.

Some analysts say the government has anticipated this and plans to move many government-owned companies into these new office buildings to guarantee occupancy. The catch is that this will empty out the buildings where these companies currently operate.

Another trend in Malaysia has been a slowdown in the entry of foreign companies. Rising wages and other developments are seen as major reasons for this. In response, the government has increased public works projects. Malaysia's stable economic growth has been greatly supported by government spending, which includes the big office building projects.

But these attempts to stoke domestic demand are hurting state finances. The outstanding balance of government debt is nearing 55% of the nation's gross domestic product. The fear is that if the government continues to take on more debt, it could accelerate the exodus of investment money from the country and hobble its own growth strategy.