TOKYO -- Japanese manufacturers are becoming increasingly dependent on foreign workers as they seek to respond to the country's labor shortage. The number of highly skilled professionals from overseas, however, remains relatively low.

Based on government statistics, the number of foreigners per 1,000 workers in 2017 was highest in the food production sector, with 80 people.

That was followed by the textile industry, with 67 people per 1,000, and auto, marine and other transportation equipment makers with 60 people. The average across all industries was 20.

Nikkei analyzed the government's labor force survey and employer reports in cooperation with Mitsubishi UFJ Research and Consulting. The all-industry average was up 120% from 9 people per 1,000 in 2009, after the Lehman Brothers' collapse.

The ratio of foreign workers to total workforce for all six manufacturing sectors in Japan was higher than the all-industry average. The other three sectors were electrical equipment, metal products and production equipment.

Seafood company Maruha Nichiro currently employs 191 foreign staff under the government's Technical Intern Training Program at its five directly-managed factories. "The number of Japanese applicants for part-time and temporary positions has fallen, so we have no choice but to rely on foreigners," said a company official.

At the same time, Japan has made little progress in attracting highly skilled professionals from overseas.

In the telecommunications sector, the number was slightly higher than the average at 24 per 1,000. In academic research and professional and technical services, the figure was 19, while in finance and insurance it was just 6.

The country has sought to plug the gap by bringing in technical intern trainees from countries like Vietnam, China and the Philippines.

The number of foreign trainees has nearly doubled over the past five years, and they now make up a key part of the country's labor force. Of 258,000 technical interns in Japan last year, 159,000, or about 60%, worked in manufacturing.

For companies with more than 300 employees, the basic quota for trainees is set at 5% of all staff, while those with up to 30 employees can take on a maximum of three people.

"Due to the worker shortages, small to midsize companies in particular are accepting as many as they can," said an official of a supervisory group that mediates between manufacturers and interns.

Overseas technical interns are also indispensable in the construction industry, in which about 37,000 currently work.

In April next year, the Japanese government plans to create a new residency status that would allow people to stay for up to five years to work in construction, agriculture, nursing, shipbuilding and hospitality, as well as metal pressing and casting. 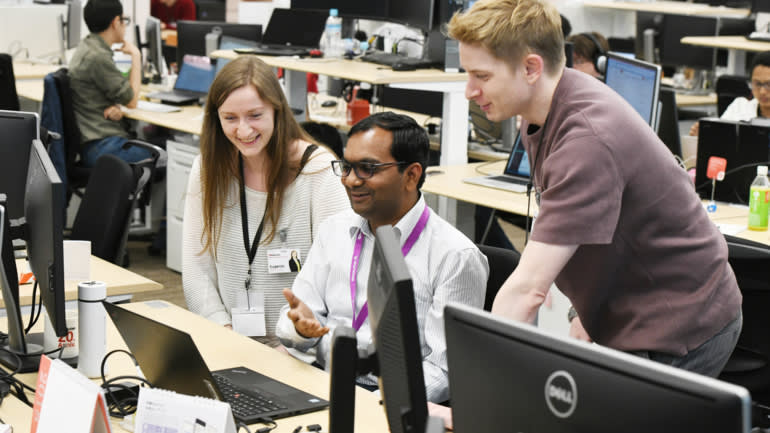 Companies like Rakuten have made English their operational language, but Japan as a whole has struggled to attract highly skilled foreign talent.

If technical interns are allowed to move to the new status after completing their five-year trainee program, they would be able to stay in the country for a total of 10 years.

But hiring trainees is not always straightforward.

"It takes a long time to provide guidance about welding and other skills," said an official at shipbuilder Japan Marine United, "so we cannot accept any more." The company currently has 400 trainees on its books.

Ensuring trainees are not subjected to improper working conditions is another issue. Some have complained of excessive overtime and unpaid wages.

Mitsubishi Aircraft, the company behind the country's first homegrown passenger jet, has about 300, mainly high-skilled, foreign workers. These employees excel at designing aircraft and gaining certification from aviation regulatory authorities in Europe and the U.S.

The government set up a residency status for highly skilled foreign professionals in 2015, which has largely failed to produce any meaningful results so far.

According to a 2017 survey by Swiss business school IMD, Japan came 51st in terms of desirability as a country to relocate to for highly skilled personnel. By comparison, China was 34th and South Korea 48th.

The Tokyo Metropolitan Government is set to loosen restrictions to facilitate the construction of dwellings that appeal to non-Japanese families.

The Ministry of Economy, Trade and Industry has identified dissatisfaction with the country's system of long-term employment and seniority-based wages as a hurdle to attracting skilled talent.