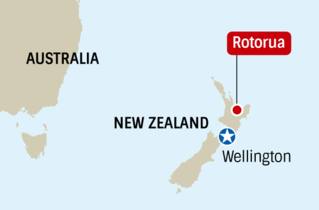 SYDNEY -- Maori, New Zealand's indigenous population, are increasing their economic and commercial presence in the country. Their investment activities are expanding as negotiations get underway under the auspices of the New Zealand government to restore Maori land and other properties that were lost when the island was a British colony.

Some Maori groups have begun exploring the possibility of forming partnerships with Japanese companies. Business collaborations are expected in the geothermal power, forestry, dairy and other sectors.

In 1840, the Treaty of Waitangi was signed by Maori leaders and Britain. It transferred sovereignty to the British Crown, and in return, Britain was supposed to guarantee land, forestry and fishing rights for Maori. However, according to a book by Ann Trotter, key words were not correctly translated, so Maori understanding was at odds with the British.

Disputes over land led to the New Zealand Wars. During this time Maori lost a lot of land to British settlers. Since the 1990s, the New Zealand government has been redressing past wrongdoing against Maori by negotiating settlements with Maori tribes.

Te Arawa Group Holdings (TAGH), the investment arm of the Te Arawa tribe, has been investing proceeds from compensation and other assets since it was established in 2007.  In 2012, TAGH acquired Wai-O-Tapu Thermal Wonderland, a volcanic area and tourist attraction in the North Island city of Rotorua. TAGH's chief financial officer, Colleen Neville, said that since 2010, TAGH has been investing in geothermal parks, kiwi orchards, as well as manuka honey and wood businesses. The company's profits are distributed among 11 hapu, or subtribes, with about 26,000 Maori benefiting.

Neville said TAGH's basic philosophy is to create wealth and opportunity for many generations to come.  She said while Maori face many socioeconomic problems, such as a higher unemployment rate than the national average, she hopes TAGH can be a leader in growing the Maori economy.

TAGH is also trying to build business alliances with foreign companies. In 2012, the company signed a memorandum of understanding with Mitsui & Co., a big Japanese trading house.

Neville says Maori find it easier to build partnerships with Japanese businesses, as they share the goal of putting prioroty on long-term investment over short-term profits.