A student takes part in a protest in Jakarta in April calling for the closure of Freeport-McMoRan's gold and copper mine.   © Reuters
November 30, 2017 10:00 JST | Indonesia
CopyCopied

The long-running dispute between the Indonesian government and U.S. minerals company Freeport-McMoRan over Grasberg, the world's largest gold mine and second-largest copper mine, shows little sign of ending any time soon -- despite optimistic government claims to the contrary.

If the government will not change course, and in particular reimpose a ban on the export of raw minerals, the courts or the voters must force his hand. Indonesia's economic development hangs on getting things right in an industry crucial to the country's future.

In August, Freeport reluctantly agreed to comply with a 2012 law requiring it to divest 51% of its stake in the subsidiary that owns Grasberg, in the remote province of Papua. But a dispute has now arisen over the sale price and a resolution without arbitration appears distant.

Cries of victory from the government following the deal were predictably overexuberant. While Freeport reluctantly accepts the need to sell down its interest to keep Grasberg in operation beyond the expiration of its current license in 2021, it understandably insists on getting a fair price. 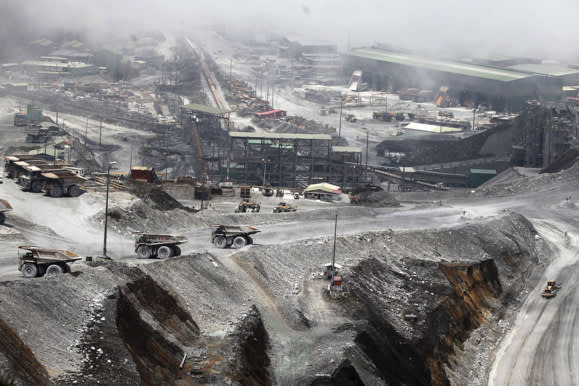 Meanwhile, with Freeport having failed to fulfill some of its long-standing obligations -- including the construction of a proposed smelter -- and Grasberg-linked investment deadlines endlessly stretched, recent developments are only the latest chapter in a long-running saga.

Is the government pursuing an economic nationalist agenda? Is it in favor of foreign investment? Does it want to push Indonesia up the commodities value chain to secure a greater share of benefits from the country's vast natural resources? Does it want to increase exports of raw minerals to reduce its budget deficit? Is it seeking to garner political capital by promoting nationalistic policies?

No one in the business, legal or mining communities can answer these questions with any degree of certainty. One could argue that the government itself does not know. But the answers matter because minerals and mining are important contributors to Indonesian economic growth, accounting for 4.2% of gross domestic product and 13% of exports by value in 2016, according to PwC, the accountancy firm also known as PricewaterhouseCoopers.

At the heart of the unpredictable course of mining regulation lies the highly politicized nature of natural resources in Indonesia -- one of the world's largest exporters of metals and minerals -- and the short-term personal and political goals of the country's leaders.

Under a mining law passed in 2009 and implemented in 2014, exports of raw minerals were banned to boost the development of a domestic refining and processing industry.

After sweeping to power on a wave of nationalism in 2014, Widodo initially backed the ban. However, last January, the export prohibition was lifted, and three years of refining sector investment and development were laid to waste. Why this stark retreat from Indonesia's stated goal of raising itself up the global value chain?

The main reason for this reversal was the mounting financial pressure on the president. The ban triggered a significant fall in overseas sales, which accounted for 17% of total exports by value before the prohibition. The export collapse hit the government's income from the sector, contributing to a widening budget deficit.

RISING NATIONAL DEBT The economy has been growing at an annual rate of about 5%, short of the 7% Widodo targeted when he came to office, and foreign investors have been heading for the door. In July, proposed revisions to the government's 2017 budget increased the deficit from 2.4% of GDP in 2016 to 2.9%, just short of the legal limit of 3%. The World Bank now lists the rupiah among Asia's most vulnerable currencies.

Meanwhile, the president has increased government spending on infrastructure to more than 60% of the annual budget from 12% before he took office. His chances of re-election in 2019 are inextricably linked to the success of his $350 billion infrastructure agenda. But rising deficits and a growing national debt have put paid to many of his projects to improve roads, bridges, ports and power grids.

It is unfortunate for the long-term prosperity of Indonesia that Widodo's pursuit of short-term political advantage, combined with a pressing need to balance the books, has served to curtail the focus on downstream investment, which was one of former President Susilo Bambang Yudhoyono's most forward-looking policies.

Keeping open the trade in unprocessed minerals permanently would render Indonesia's domestic mining industry incapable of creating long-term added value for its people. Lifting the export ban has deeply affected the investment climate, creating legal uncertainty. Many analysts believe that the export of raw mineral resources contradicts the Indonesian constitution of 1945, which mandates the utilization of soil, water, minerals and natural resources extracted from the earth for the prosperity and welfare of the Indonesian people.

There remain many influential advocates of the ban on unprocessed mineral exports, such as the Civil Society Coalition, a group of lawyers, academics, environmental activists and nongovernmental organizations, which failed in an attempt to persuade the Supreme Court to reimpose the restrictions. Now this coalition and others in favor of the ban must unify, refocus and renew their legal challenges, as well as mobilize the public.

In typically prevaricating style, the Supreme Court has yet to release its reasons for the ruling, but a new case could be filed, or the judgment could be challenged in the State Administrative Court. Unfortunately, the courts are not immune to political pressures, and with an election on the horizon the most effective course of action may lie in ensuring that mining is a key campaign issue. Those calling for a restoration of the ban must make their voices heard loud and clear.

As well as encouraging more investment in the industry as a whole, a clear decision to reinstate export restrictions would help to clarify the future of Grasberg, giving Freeport little option but to build the smelter the country so dearly needs.

Marwan Batubara is executive director of the Indonesian Resources Studies, an independent think-tank in Jakarta focused on natural resources policy.