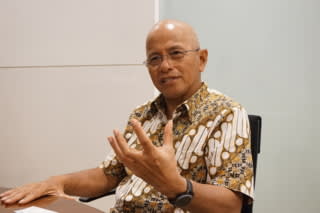 Hilmi Panigoro, president of Medco Energi Internasional, speaks during a Jan. 5 interview at the company’s headquarters in Jakarta. (Photo by Wataru Suzuki)

Despite its small size, Medco has inked deals worth some $3 billion in Indonesia over the past six months, snapping up a major copper mine and offshore oil block from U.S. companies, as well as winning a bid to develop a water treatment project. All the acquired assets are located inside Indonesia.

Medco's shopping spree kicked off in June 2016 when it announced a $2.6 billion bid to buy the Batu Hijau copper and gold mine on the eastern island of Sumbawa from Newmont Mining and its partners. Three months later, the company said it would acquire ConocoPhillips' 40% stake, the remainder of Chevron and Inpex's interest in the South Natuna Sea Block B, for about $240 million, marking an ambitious foray into offshore exploration and production. In early January, Medco won a tender for a 2.1 trillion-rupiah ($157.6 million) water treatment project in East Java.

It is still hungry. "We are in discussions," Medco President Hilmi Panigoro told Nikkei Asian Review when asked whether the company is pursuing a 25% stake that Chevron holds in the South Natuna Sea block. As for the remaining 35% held by Japan's Inpex: "If they decide to sell, we are more than happy to talk to them," he said, smiling.

Medco's share price, which hit a peak of 6,100 rupiah in 2007, tumbled to an 18-year low of 670 rupiah in February 2016. Instead of retreating, Panigoro took a counter-intuitive approach to expand amid the commodity turbulence. Its shares have bounced back, ending at 1,455 rupiah on Jan. 13.

Dressed in a short-sleeved traditional batik shirt, Panigoro, 61, looked relaxed during the interview, held on the top floor of the Energy Building, the company's headquarters in Jakarta. He had just retured from a three-day vacation on a remote plantation in West Java with close friends and relatives.

But his calm demeanor belied his big ambitions during his two decades at the company. Panigoro's older brother Arifin founded the business in 1980 as a drilling contractor for a foreign-owned company, Stanvac Indonesia. Medco eventually bought the company in 1995 and a year later discovered a giant oil field in South Sumatra that still remains one of Medco's most important revenue generators.

As business boomed, Panigoro, who had worked at another oil company, joined his brother in 1997. "We basically become a real player," he said, "and at that time, our ambitions became to go global." 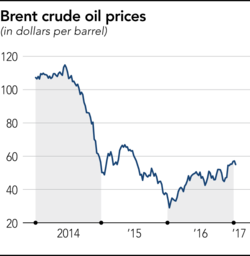 It turned out to be a bad time for expansion. The 1997 Asian financial crisis struck, and most banks refused to give loans. It took several years for Medco to restart its global push. In 2004, it acquired an Australia-listed oil company, Novus Petroleum, and later entered the Middle East. But after investing hundreds of millions of dollars in oil businesses in Libya and Yemen, its ambitions were once again jeopardized by the violent conflicts associated with the Arab Spring.

"Can you imagine, a company of our size, had more than $300 million stuck [overseas]?" Panigoro said. "That hurt us." Meanwhile major projects at home, like the Donggi Senoro LNG project in Sulawesi, were facing delays. Medco's current expansion was triggered by the latest crisis, a sharp decline in crude oil prices which started in the second half of 2014. In 2015, Medco's earnings was hit hard as revenue fell 16% year-on-year to $628 million, and its bottom line swung from a $4.7 million net profit to a $182 million net loss due to a $230 million impairment charge. Then Medco returned to a $22 million profit for the first nine months of 2016 as oil prices bottomed out.

Panigoro considered unloading some of the group's exisiting assets to survive. But the ambitious man instead took "to find a more productive asset to cover your debt". Two assets stood out - one was Batu Hijau, a lucrative copper and gold mine but one in which its leading shareholder, Newmont Mining, had been in a spat with the Indonesian government over the construction of a smelter. A recently updated regulation also stated that foreign miners will eventually need to divest 51% of its stake in order to continue exports.

The government, which had appeared increasingly keen to nationalize its natural resources, also lent a hand. The newly established company buying the mine operator, Newmont Nusa Tenggara, was a joint venture with a former executive at state-owned securities company Danareksa Securities. Three state-owned banks, Bank Mandiri, Bank Rakyat Indonesia and Bank Negara Indonesia, provided loans totaling $750 million, which Panigoro said was "a better deal" than a separate offer by a consortium of private lenders.

In late 2015, Arifin, whose official title at the company is adviser, outlined to Rizal Ramli, who was then in charge of the energy ministry, Medco's plans to bid for the mine. After one meeting, Ramli reportedly said he supported the deal because it would prove that an Indonesian company had the capability to take over a large asset.

"I have to admit, I don't [think] we could have done this without the full support of the government," Panigoro said, "although looking at the fundamentals, it's fully justified...the loans will be repaid in 18 months."

While Medco officials deny any direct ties with the government, Arifin was once a senior member of the Indonesian Democratic Party of Struggle, the ruling party that backed President Joko Widodo in the 2014 election. The company's board of commissioners and advisers is packed with former top-level government officials, including chairman Muhammad Lutfi, a former trade minister. One analyst at a local brokerage says, "Hilmi runs the daily operations, while Arifin does all the lobbying to the government."

Panigoro said Medco was also given a guarantee that the government would ease the ban on exports of copper concentrate that Batu Hijau produced, a critical measure if the company was to generate cash and repay its loans. On Jan. 12, the government announced a sweeping set of new mining rules that allowed copper concentrate exports for another five years, under certain conditions.

Other projects that the company has been involved in include the Donggi-Senoro project, which made its first shipment in 2015 and in which Medco has a stake in both upstream and downstream operations. The 330-megawatt Sarulla geothermal project in North Sumatra, jointly developed by a consortium of Japanese companies and Medco's power unit, recently finished the first phase of construction. In 2015, Medco partnered with the Philippines' Aboitiz Power to explore a geothermal plant in Indonesia. "We are creating 3 pillars -- power, oil and gas and mining. We want to grow these pillars in the future," said Panigoro. 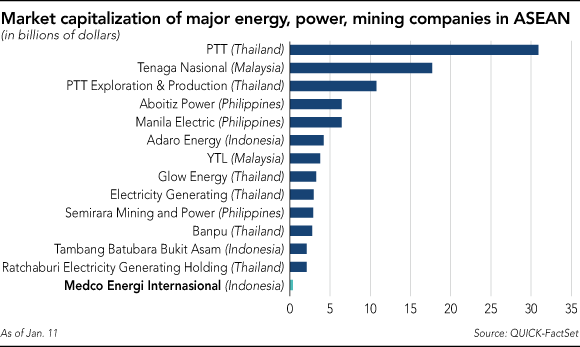 Medco produced 55,620 barrels of oil equivalent per day in 2015, less than a tenth of state-owned oil and gas company Pertamina's output. Panigoro argued that a strong, second local player is needed, citing the example of Pemex, the state-controlled oil company of Mexico. "Every country has so-called resource nationalism...but look what happened in the last two years when Pemex became too big to operate the whole asset in the country," he said, referring to billions of dollars worth of losses the company suffered from the decline in oil prices. "That's why I suggested to the government that it's okay for Pertamina to control as much as possible, within its ability to control operations."

Medco's market capitalization stands at around $400 million, much smaller than its regional peers. But the company has ambitions to become a new major domestic player in the energy and resource sectors by buying foreign assets during cyclical downturns. Many of the new projects, however, "are still 'hidden assets.' It will take some time before they give meaningful impact to Medco's share price," said William Simadiputra, an analyst at DBS Vickers Securities.

Medco's interest-bearing debt stood at $1.7 billion as of September 2016, a 57% rise from three years ago, according to Quick FactSet data - a much faster growth rate than its assets, which rose 17% over the same period. The company's debt burden is set to increase further due to the string of acquisitions. It has also promised to the government to build a smelter near the Batu Hijau mine that could cost hundreds of millions of dollars more.

Panigoro acknowledged that the smelter may dent profits, calling it "a necessary evil" and said he is considering an IPO for the mining unit to fund its construction. Cost-cutting measures have returned Medco to profitability for the first nine months of 2016. Investors will be watching to see whether government policies will be an asset or a liability when it comes to the company's bottom line.