Migrants look to Asia, the new land of opportunity

More workers turn east as US and Europe shut their doors TOKYO -- Tokyo's Korea Town, Shin-Okubo, is undergoing a wave of disruption. Popping up among the Korean barbecue restaurants and skin care stores are Nepalese eateries fitted with flashing lights and loud speakers for music.

Backed by the roughly 3,000 Nepalese living in the capital's Shinjuku district alone, Shin-Okubo is quickly becoming a "Nepal Town," upending the Korean dominance.

This uprising is led by 36-year-old Thapa Puskar, manager of the Nepalese tavern Solmari. The restaurant attracts a horde of young expats missing their home cuisine and looking for a bit of advice on navigating life in the metropolis.

Puskar represents a new generation of immigrants who head east instead of west when seeking a new life outside their home countries. Though the U.S. still attracts the largest number of migrants, Asia has gained prominence as a destination.

Puskar arrived in Japan in 2004. After attending a language school, he earned a degree in international management, hoping to start a company. While working part-time at a beef-bowl eatery, Puskar nursed his dream of entering the restaurant business.

That ambition has created a popular tavern that attracts hundreds of guests a day, and sometimes none of them are Japanese. Solmari, which boasts a projector, audio equipment and a stage for live performances, often is rented out for vibrant parties. 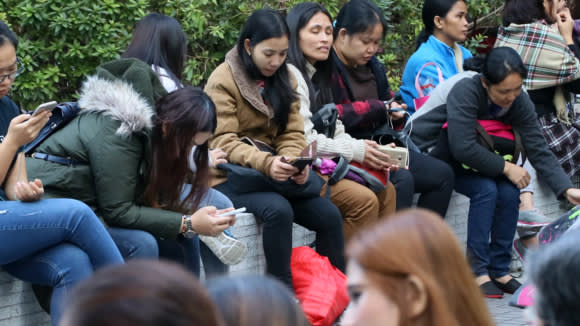 Many young women from the Philippines work as housekeepers in Hong Kong. (Photo by Shinya Sawai)

An estimated 258 million people lived outside their country of birth in 2017, up 50% from 2000, according to the United Nations. The U.S. tops the list with 50 million migrants, but Saudi Arabia, the United Arab Emirates and India are major recipients as well.

Asia, including the Middle East, is home to 80 million migrants, or around 30% of the total. In 2015, Asia surpassed Europe as the largest hub of international migrants.

The U.N. defines "migrants" as people who live in a nation or region other than their country of birth. They include economic nomads, refugees, foreign students and family members of people working overseas. But this group does not include tourists or individuals who stay overseas for a few months.

The U.S. has received fewer migrants in recent years. The world's largest recipient nation accepted 11.6 million new migrants on a net basis in the 1990s, nearly 60% of the total worldwide. But the figure dropped to 9.4 million in the 2000s and to 5.6 million so far this decade. 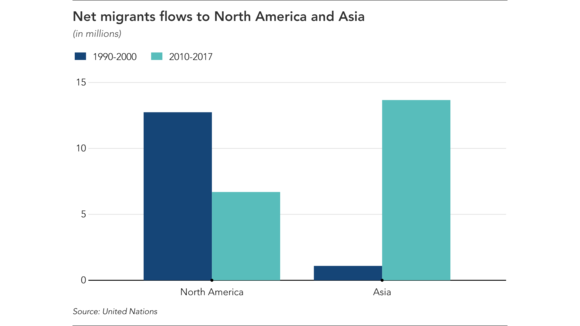 While 36% of new international migrants now move to Asian countries, the ratio has fallen below 20% each for the U.S. and Europe. As anti-immigrant sentiment grows in these former lands of hope for migrants, Asia is absorbing a huge number of them while maintaining high economic growth led by China.

Thailand has accepted the most migrants in East Asia since 2000 with 2.3 million, followed by Malaysia and South Korea. The active acceptance of migrants by Thailand and South Korea evidently reflects policies of compensating for labor shortages with workers from abroad, as the working-age population of 15 to 64 is forecast to begin decreasing in both countries around 2020.

Japan hosted 2.56 million foreign residents at the end of 2017, up nearly 500,000 from a decade earlier. Companies in services and construction are expected to produce greater demand for foreign workers. 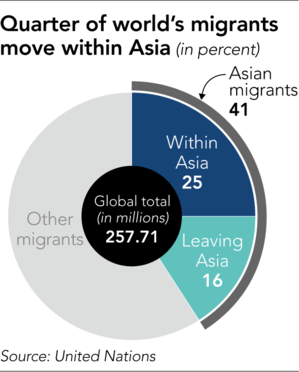 Asian countries also send many people overseas, led by India. The number of Indian-born people living abroad totaled 16.6 million in 2017. About 20% of all Indian migrants reside in the UAE, which has accepted a massive number of construction workers and other economic nomads from India and elsewhere amid developments such as a construction binge before the 2020 world expo in Dubai. Indian laborers now account for 30% of the UAE's population.

China, Bangladesh and Syria are also major producers of international migrants, along with Pakistan and the Philippines. Asia accounts for six of the 10 countries having the largest migrant populations living abroad.

Migrants from mainland China totaled 10 million in 2017, with the U.S. attracting 2.4 million of them followed by Hong Kong with 2.3 million and Japan with 740,000. One of every three Chinese people living in Japan is a permanent resident. 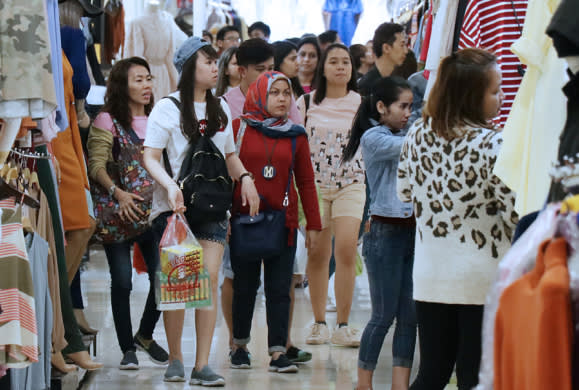 Women walk at a shopping mall in Bangkok. (Photo by Shinya Sawai)

Migration within Asia has become a trend, with 63 million such migrants on the continent in 2017. One of every four migrants worldwide moved within Asia, compared with one out of five or so in 2000. In contrast, the ratio of migrants born in Asia but living in Europe dropped to 19% from 24%.

Zhao Yuanyuan, a 30-year-old who hails from China's Guangdong Province, fell in love with Thailand when she came to Bangkok to study for a master's degree seven years ago. Bangkok has less pressure than China, and similar weather, she said. There are jobs aplenty for Chinese speakers in Thailand.

Many people once migrated to English-speaking countries in Europe with high income levels, but "the pursuit of jobs in the nearby [Asian] region is spreading due to the development of emerging economies," said Ryutaro Kono, chief economist at BNP Paribas Securities (Japan).

Demographic data confirms this vitality for Asia. The median age of migrants in Asia dropped to 35 last year from 37 in 2000 due partly to a rise in immigration by young people within Asia.

The median age of migrants to North America jumped to 45 from 38 in that time. In the U.S., the decline has continued for the so-called Rust Belt and the white middle class, while the income and social status of Asian and other migrants to the country have kept rising. U.S. migrants have a lower unemployment rate than those born in the country.

As U.S. President Donald Trump tries to protect jobs for white workers through the proposed abolition of the "green card lottery" under his "America First" policy, the flow of migrants into the U.S. may slow further.

The average age of migrants to Europe also rose, to 43 from 41. As in the U.S., public opinion and political policies favoring less acceptance of human resources from abroad are growing as Europe faces problems such as continued high jobless rates among young people.

The U.N. estimates that Europe's population would begin shrinking later in the decade if the inflow and outflow of migrants equalized as of 2015. The population of North America will expand until 2050 if the number of migrants increases at the current pace, the U.N. says, but a slowdown could begin reducing the population in 2040.

Asia's economy continues to expand on a labor supply fueled by ample availability of migrant workers. The Asian Development Bank forecasts that if China's stable economic growth continues, Asia will produce 50% of the world's gross domestic product in 2050, a level not seen since the 1700s before the Industrial Revolution.

The more the U.S. and Europe shut their doors to migrants, the sooner the "Asian Century" will come.