Millennials share their way to a new form of capitalism

A generation finds fun, comfort and opportunity in the sharing economy A man meditates under the Kiyomizu no Taki waterfall in Japan's Saga Prefecture, as part of a bespoke tour. (Photo by Takaki Kashiwabara)

TOKYO -- Homes, cars, parking spaces, bicycles, clothes, even graves: The scope of the "sharing economy" is perpetually expanding, fanned by advances in information technology and a tech-savvy millennial generation.

In Japan alone, sharing services raked in about 1.18 trillion yen ($10.39 billion) in revenue last year, according to Tokyo think tank InfoCom Research. That figure is expected to reach 2.63 trillion yen in the not-too-distant future.

But what, exactly, does this mean for the overall economy? Why does sharing resonate so much with millennials -- people born around 1980 and thereafter?

As a 35-year-old millennial myself, I set out to explore this trend -- one that is shaking the very foundations of capitalism and changing the way the world operates.

I decided to take a trip in mid-October, and resolved to use the sharing economy to keep my expenses down. The plan was to immerse myself in a local culture.

I caught a budget flight from Tokyo to Saga Prefecture and found a place to stay through Airbnb, the U.S.-based sharing service for vacation rentals. One night set me back 5,000 yen.

I also used a car-sharing service that charged 206 yen for the 15-minute drive to my destination.

A service called Tabica, meanwhile, demonstrated how the sharing economy extends to less-tangible things, too -- like knowledge and skills. SoftBank aims to steer Japan's taxis into age of Uber

Tabica connects users with workshops and unique local experiences. I chose a package that included meditation under a waterfall, a visit to a hot spring and a chance to prepare a carp dish -- a local delicacy -- in Saga's mountainous city of Ogi.

The first stop was the Kiyomizu no Taki waterfall, a popular spot for tourists. There, I partook in ascetic training alongside Kazumasa Anzai, a 30-year-old civil servant who said he wanted a rare experience "while praying for my wife's safe delivery."

Then it was off to a restaurant called Koishige for the trip's main event. Dai Eriguchi, the chef, showed us how to clean the fish and cut thin slices -- a tricky task. The carp was odorless and very chewy.

Unlike typical tour packages sold by travel agencies, which limit you to specific accommodations and sightseeing spots, Tabica users can decide for themselves what to do, where to stay and how to get around. Plus, it offers professionals like Eriguchi a way to share their expertise.

The four-hour carp workshop cost 4,000 yen. All told, including transportation, I spent a little over 30,000 yen on the trip.

Car sharing, often the go-to example of the phenomenon, is believed to have its roots in a Swiss cooperative formed in 1987. The internet and smartphones have allowed the concept of sharing to spread on a grand scale, with online brokers serving as go-betweens.

Besides travel, new services are sprouting up for, say, housework and child care. In China, where bicycle sharing has flourished, a startup is attempting to make umbrella sharing the next big thing. 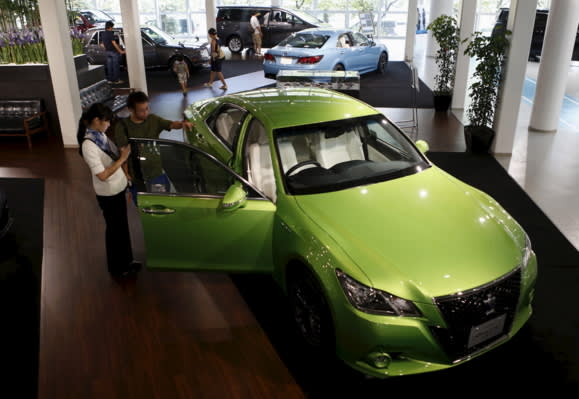 Car ownership: a potential casualty of the sharing economy   © Reuters

All of this is bound to impact the broader economy. One estimate suggests that the rise of the sharing economy could lead to a 53% decrease in vehicle ownership in eight major industrialized countries.

The more people share, the less they will buy. This, coupled with the online shopping explosion, is putting real pressure on department stores and other brick-and-mortar retailers. But while the emergence of sharing might mean pain for some, consumers and enterprising businesses have much to gain.

For Japanese millennials like myself, the appeal of sharing stems from at least two factors: our relatively comfortable upbringings, and the anxiety many of us feel about the future.

Anju Ishiyama of the Sharing Economy Association, Japan, explained that this generation is "not fixated on possessions because they have never suffered materially or derived satisfaction from material abundance."

At the same time, Japanese millennials came of age after the collapse of the country's economic bubble, so we know how quickly the tide can turn. This promotes a rational approach to life -- renting a home over buying one, and shying away from owning a car.

I can attest to this personally. I avoid buying expensive luxuries, and I do not own a car due to the high cost of parking and insurance.

Ishiyama, who is 28, also explained that many millennials "use sharing services in search of connections between people, which have become weaker."

There may be less consumption in this new sharing-driven economy, but it is easy to see the potential for enriching lives. Consumers get access to goods and services that would otherwise seem out of reach or impractical. Technology, so often blamed for creating barriers between people, brings them together. Entrepreneurs are able to monetize resources and skills in new ways. And companies are able to reach whole new consumer segments.

This could reshape the economic system and capitalism as we know it.

Private ownership, of course, is one of the basic principles of capitalism. The urge to own things has long driven consumption and economic development. But what if that urge fades, replaced by the desire to share?

Koichi Ito, a professor of economics at the Chiba University of Commerce, said capitalism has its limitations. He pointed to environmental degradation and unequal distribution of wealth as prime examples.

"The sharing economy is the symbol of a turning point in the transformation to a new form of capitalism," Ito said. This new system is based on recycling and distribution and is "not predicated on private ownership, hence it is sustainable."

The sharing economy is already touching people from all walks of life.

In mid-October, a group of women used a service called Space Market to book a venue for a Halloween party in Tokyo. Maki Ebisawa, 29, made the booking, which cost 4,400 yen for five hours. These women used a space-sharing service to hold a Halloween party in Tokyo. (Photo by Takaki Kashiwabara)

Kanako Imai, 30, brought her baby along and said she was relieved not to have to worry about disturbing others -- an issue even in child-friendly cafes.

Asuka Saigo, 27, was impressed by the several large rooms. "I want to use the space again," she said.

Kosuke Shimizu, a 23-year-old Nikkei reporter, also held a Halloween party there. To spice it up, he arranged a lesson in wound makeup from a fortuneteller through Coconala -- an online platform where people buy and sell skills and knowledge. For food, he ordered Italian through UberEats, a delivery service run by U.S. ride-hailing giant Uber Technologies.

Courier Noriyasu Uehara, who dropped off the food, said he is a truck driver by profession but makes deliveries on his bicycle in his spare time. "I started [the delivery job] because I like to talk to people," the 35-year-old said. "Because some months I earn 50,000 yen, it's nice to have this work on the side."

This much is certain: The sharing economy is weaving its way into the fabric of society.