Modi calls for 'trustworthy' supply chains, in alternative to China

His comments came the same day that Japan expanded a subsidy program that helps Japanese companies move out of China, by including new destinations such as India and Bangladesh. The program had initially envisioned factories moving back to Japan or shifting production to Southeast Asia.

Modi's statement also follows a decision Tuesday by trade ministers from Japan, India and Australia to begin building a resilient supply chain in the Indo-Pacific region. Aiming to reduce trade dependence on China -- which was exposed when the coronavirus outbreak halted the flow of major goods across Asia -- the three countries stressed the need for a free, fair and predictable trade environment and urged like-minded nations in the region to participate.

At Thursday's virtual address to the U.S.-India Strategic Partnership Forum, Modi said that the pandemic has "shown the world that the decision on developing global supply chains should be based not only on costs. They should also be based on trust."

Apart from geographical merits, "companies are now also looking for reliability and policy stability," the prime minister said. "India is the location which has all of these qualities." He did not mention Beijing by name, but the speech fits a recent trend of decoupling from China, as the two major countries face off on the Himalayan border. It also comes against the backdrop of escalating Sino-American tensions and the COVID-19 pandemic. Many nations dependent on China for trade have suffered from supply chain disruptions, highlighting the need for diversification.

"Be it America or the [Persian] Gulf, be it Europe or Australia, the world believes in us," he said, noting that the South Asian country received over $20 billion in foreign investment flows this year, with giants like Google, Amazon and Mubadala Investments announcing long-term plans for India.

Modi also said that India's 1.3 billion population has embarked on a mission to make itself "self-reliant." The goal of the "Aatmanirbhar Bharat" campaign is to ensure "India's strengths act as a global force multiplier," he said. "A self-reliant and peaceful India ensures a better world." 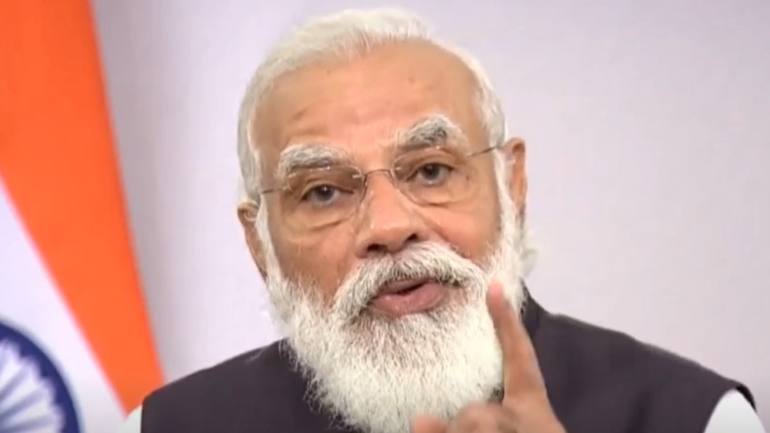 When the Ministry of Economy, Trade and Industry opened a second round of applications on Thursday, it added "projects that contribute to the resilience of the Japan-[Association of Southeast Asian Nations] supply chain" to the list of qualifying moves, eyeing relocations to countries such as India and Bangladesh.

Manufacturers can receive subsidies for feasibility studies and pilot programs. The total amount granted is expected to run into the tens of millions of dollars.

The program aims to reduce Japan's reliance on a handful of links in its supply chains, particularly China, and ensure a steady flow of products such as medical supplies and electrical components in an emergency. This issue came to the forefront with China's shutdown in the early days of the pandemic.

The first round of subsidies announced in July granted more than 10 billion yen to 30 companies relocating manufacturing to Southeast Asia. These include Hoya, which is moving production of electronic components to Vietnam and Laos, and Sumitomo Rubber Industries, which will make rubber gloves in Malaysia.

Another 57 are receiving support for shifting production facilities to Japan, such as Iris Ohyama -- the first to be approved -- which is manufacturing face masks at its Miyagi Prefecture home base. Other prominent names approved for subsidies include Sharp, drugmaker Shionogi and medical equipment manufacturer Terumo.