NEW DELHI -- Umed Singh Rana, a farmer from Qutubgarh, a village on the outskirts of the Indian capital, has taken up a new line of work, beekeeping. Rana is 80 years old but was tempted to get into honey farming by an ambitious government program.

Flanked by his brother Ravinder and son Dinesh, Rana points to neatly arranged rows of 100 beehive boxes placed close to his 10-acre mustard farm, where the insects collect pollen and nectar, not only producing honey but also helping to improve crop yields through cross pollination.

The government's Khadi and Village Industries Commission helped Rana's family and other villagers set up Delhi's first beekeeping operation with subsidies of 3,000 rupees ($42) per beehive box, which cost 4,000 rupees apiece. The effort was part of a larger initiative that since 2017 has distributed 70,000 boxes to farmers across the country. The initiative's goal is to help double farmers' income by 2022.

But Prime Minister Narendra Modi's "sweet revolution" is missing some parts, and some of the farmers who have joined the program are wondering if honey might end up being another crop that they cannot sell at a fair price.

The KVIC promotes village industries as well as handspun, handwoven khadi fabric under the Ministry of Micro, Small and Medium Enterprises. In Qutubgarh, it presented an initial seven-day training session to the villagers, teaching them how to handle bees, extract honey and beeswax, clean the boxes, and prevent "bee eaters" -- ants and birds -- from approaching the colonies.

Last year, spreading agrarian distress led farmers from across the country to march to the capital several times to demand loan waivers and better prices for their crops. 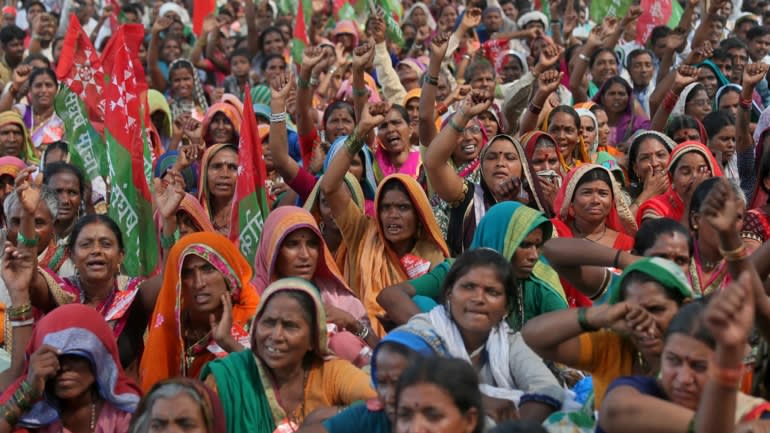 Farmers wave flags and shout slogans during a rally to demand loan waivers and the transfer of forestland to villagers who have farmed the areas for decades. The protest took place in Mumbai on Nov. 22, 2018.   © Reuters

Agriculture employs nearly 50% of India's workforce but in turn contributes about 15% to the country's gross domestic product. To augment income in this sector, Modi time and again has called for a "sweet [honey] revolution" which, he says, has the potential to transform farmers' lives.

Apart from teaching basic bee rearing and honey extraction, the KVIC imparts advanced training to select farmers through its Central Bee Research Institute, situated in the western city of Pune. At these sessions, fledgling beekeepers are instructed on how to separate bee pollen, royal jelly and venom. They learn to travel with their bees from one place to another in search of better flora. Other than mustard, cotton, rice, peas, beans and eucalyptus trees are considered good for honey farming.

A kilogram of bee venom -- produced by the glands associated with a bee's sting apparatus and responsible for the pain of being stung -- can sell for 10 million rupees. It is highly sought after because it is used in cancer medicines, according to KVIC chairman Vinai Kumar Saxena.

"These are very high-value byproducts," Saxena said, "and create additional income for farmers."

Dinesh, Rana's 40-year-old son, will soon attend the CBRI's advanced boot camp. In less than three months since the 100 boxes were placed on his family's farm, Dinesh said, they have multiplied to 125 (the queen bee in each box lays around 2,000 eggs every day), and 1,200 kg of honey has been extracted. The farmers of Qutubgarh, on the outskirts of India’s capital, have a growing number of bee hive boxes and aspirations of becoming a regional honey production hub. (Photo by Kiran Sharma)

However, the villagers have had difficulty selling their raw honey, which they call "cream honey" because it starts to crystallize within two or three days and needs to be consumed within a month. Once harvested, honey has to have its excess moisture and wax removed by gentle heat to keep it from crystallizing.

The farmers do not have the production facilities that can handle this chore. Nor do they know how to contact exporters who procure raw honey in bulk. "We are currently selling the honey within our village and the surrounding areas for 300 rupees per kilogram and will use the money to invest in more beehive boxes," Dinesh said.

He added that eventually they would like to have a processing plant in the village.

"A farmer's biggest worry is that he is unable to get a fair price," Rana said. "We don't shy away from hard work, but who will ensure that [our honey fetches a fair price]?"

KVIC plans to soon hook up the farmers with the Prime Minister Employment Generation Programme, which can extend loans, subsidies and training for setting up honey processing plants. Establishing a plant costs 1.5 million rupees, and farmers can receive subsidies worth up to 35% of loans they take out for this purpose. The loans carry a 4% interest rate.

"They may also establish bottling and label-printing units, which cost around 700,000 rupees and 500,000 rupees, respectively," Saxena said, adding that each bottling, labeling and processing plant can employ at least 25 people.

Vijay Kasana, who runs Lucky Bee Farm -- a maker and wholesaler of honey, honey byproducts and beehive boxes -- visits Qutubgarh from time to time to guide the farmers along. The KVIC hive boxes were supplied to Qutubgarh through Kasana.

A typical beehive box comes with eight to 10 frames -- into which bees build honeycomb -- as well as several thousand bees and one queen bee.

By the end of February, Qutabgarh's mustard crop will have been harvested, and villagers will have extracted about 3,000 kg of honey. Their next task will be to migrate their boxes to another area rich in flora.

Along the way they will keep their fingers crossed for that promised doubling of their incomes.

Rana is hopeful. The honey mission, he said, "is a very good scheme initiated by Prime Minister Narendra Modi."