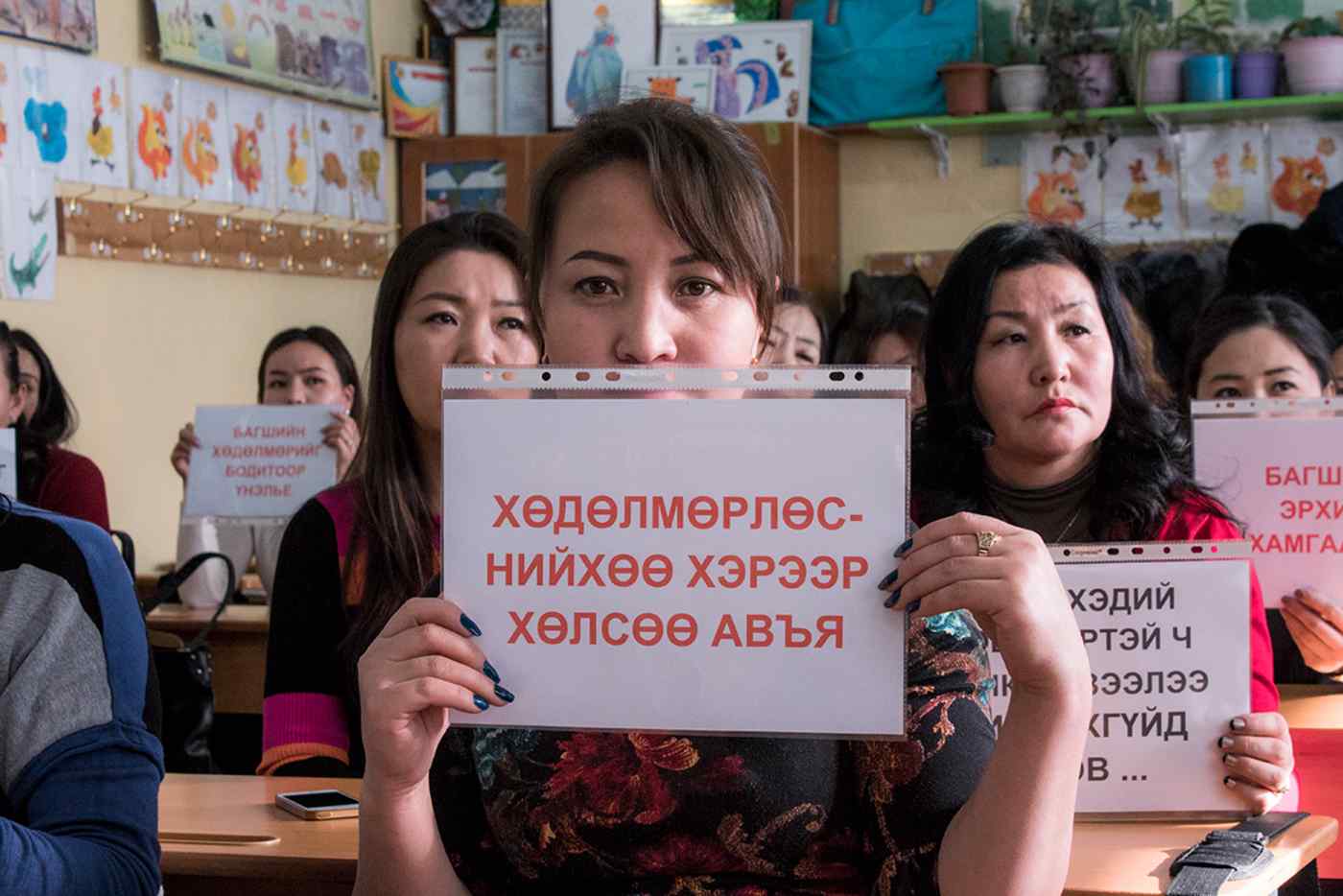 ULAANBAATAR -- A rolling strike by public school teachers in the Mongolian capital has left parents scrambling and pushed the government into an awkward position.

Teachers at Ulaanbaatar's public schools and kindergartens are demanding higher wages. But the cabinet of Prime Minister Khurelsukh Ukhnaa, formed on Oct. 18, has insisted that "resources are low and that the government was obliged not to raise public workers' salaries or increase staff according to the agreement with the International Monetary Fund."

Mongolia secured a $5.5 billion loan package from the IMF and its partners to cover a budget deficit brought on by economic crises.

The strike, launched on Monday, has halted operations at 90% of schools in the capital and many in rural areas. The teachers want their average monthly salaries raised to 1.6 million tugrik ($652), from 650,000 tugrik.

I do a job that was intended for two people, but I don't earn a two-person salary

It is true that, under the terms of the IMF bailout extended in May, public employee salaries are to be frozen so as to control the deficit. The IMF did allow the government to provide one-time cash allocations of 300,000 tugrik to 190,000 teachers, doctors and other public employees this year and next year.

The teachers say they need higher salaries -- not stopgap handouts -- to improve their lives.

"I do a job that was intended for two people, but I don't earn a two-person salary," said Davaakhuu Galsanbazar, 47, who leads a kindergarten class of 70 pupils. "My two sons are both university students and I am struggling to pay their tuition."

In the last decade, Mongolia saw a surge in births as well as more migration from the countryside to Ulaanbaatar. The student bodies of public schools and kindergartens in the capital have doubled or tripled accordingly. Before this week's action, teachers had already staged two single-day strikes this school year, in September and October. The movement has inspired medical personnel and artists to also call for fairer pay; pointing to much higher private-sector salaries, doctors and nurses are seeking to double their monthly wages.

Undral Chuluunbaatar, a music teacher at another kindergarten in Ulaanbaatar, said, "I believe there is enough funding to raise salaries if decision-makers spend the budget effectively, and without using their power to steal."

The government on Monday first reacted by pushing back.  The minister of education, culture, science and sport on Monday declared that strike would not produce the funding needed to raise salaries, and that teachers should take responsibility for losses due to the stoppage.  But later in the day, sources say, the government did offer a limited raise.  Teachers went back to work on Tuesday, but the outcome of the negotiations is still unclear.

Suvd-Erdene Purev, who teaches physical education at Ulaanbaatar's 5th school, broke down her monthly finances to illustrate the teachers' grievances. Teachers in the capital have been grappling with growing class sizes. (Photo by Ochir Khaidui)

Other teachers complained that public schools do not provide stationery supplies, including colored pencils, flip charts, copy paper and so on. Teachers must pay for these items out of their own pockets.

On top of that, schools impose pay cuts if students are late, absent or fail to wear uniforms.

Bolormaa Sanjaajav, a 38-year-old librarian at Ulaanbaatar's Central Library, brought her 3-year-old son to work but finds it difficult to watch the toddler and do her job.

"Kindergarten teachers have no need to strike," she said, adding that their salaries would also rise if grade school teachers succeed in their fight.