Motherson Sumi gears up for diversification after VW's 'Dieselgate' 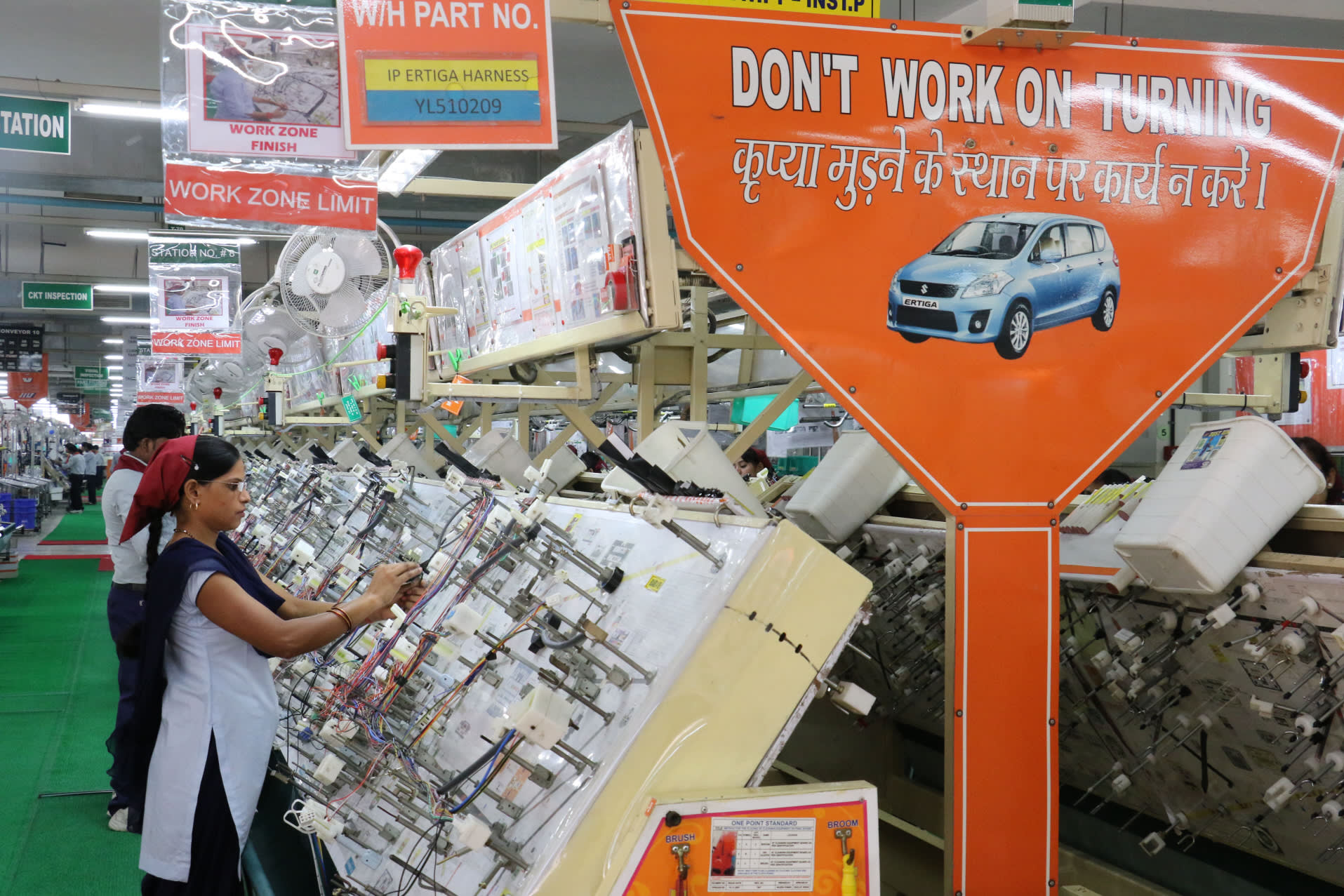 NEW DELHI -- After a year picking its way through the diesel emission scandal of German automaker Volkswagen, India's auto component major, Motherson Sumi Systems (MSSL), is getting back on track with mergers and acquisitions aimed at tripling turnover by 2020. 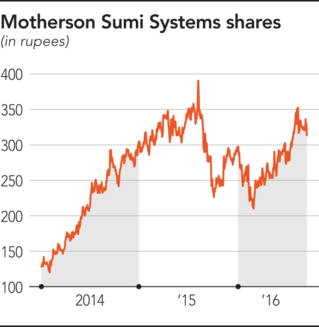 Based in northern Uttar Pradesh state's Noida city, the company announced on Sept. 7 it was buying a unit of Hungary's Abraham and Co. that supplies plastic components to carmakers in Europe. The 780-million-rupee ($11.7 million) deal is due for completion in October, and is the company's 14th acquisition since 2002 when it bought Wexford Electronics in Ireland.

The Volkswagen emission scandal started in the U.S. and caused one of the most serious reversals for MSSL since it was created as a joint venture with Japan's Sumitomo Wiring Systems in 1986. Shares lost 11.5% over six days from Sept. 18 last year, falling to 251.25 rupees on the BSE (formerly Bombay Stock Exchange) for one of the biggest drops since listing in 1993.

Investors were spooked because the Volkswagen Group, which includes Audi, Porsche, and Seat, contributed over 40% of MSSL revenues. On Sept. 28, shares fell 5% on reports that 2.1 million Audi cars could be affected. Audi is the largest source of revenue for MSSL.

"It was a kneejerk reaction," Deepesh Rathore, director of auto consultancy Emerging Markets Automotive Advisors, told the Nikkei Asian Review. MSSL had to clarify that only about 10% of its revenue of over 380 billion rupees came from Volkswagen, the largest brand under Volkswagen Group by units, but investors remained wary, partly because the impact across the entire industry was unclear.

Doubts about MSSL's growth prospects have been lifted by its solid performance, however. On May 17, it announced a 22% jump in fourth-quarter net income, boosted by higher sales in all markets. The company also does not supply diesel engine parts to Volkswagen and had limited exposure to the U.S. where Volkswagen has already agreed to settlements that may total $16.5 billion. Shares hit a 52-week high of 358.55 rupees early last month after MSSL announced its board was evaluating fundraising options.

The company has seen compound annual growth in the past decade of over 40% thanks to successful mergers and acquisitions.

Its acquisition of Hungary based Abraham is the first since the January 2015 buyout in Germany of Scherer & Trier group's assets for about 2.7 billion rupees. With the acquisition, MSSL aims to bolster its capacity to produce mirrors in Europe. Abraham will support MSSL's mirror unit, Samvardhana Motherson Reflectec (SMR), as a market leader for automotive mirror technology in Europe, MSSL said. Motherson Sumi has averaged one acquisition per year since 2002. It seeks companies nobody else will buy but is still picky. "Out of 100 [possible] deals, we will do only five," says Chairman Vivek Chaand Sehgal. "Acquisition is a very dangerous business. You have to be careful -- it's easy to get carried away."

Motherson Sumi looks for "tough" assets its clients will need, and never overpays. In Sehgal's words, they got Wexford Electronics "for a song".

"They were uncut diamonds," said Sehgal, describing loss-making businesses that have been turned around. These include Visiocorp, a British rear-view mirror maker acquired in 2009, and German plastics company Peguform in 2011.

MSSL is the flagship of Samvardhana Motherson Group, and its products include wiring harnesses, passenger car mirrors, plastic components, interior modules and trims, and bumpers. It also makes various polymer, elastomer, and metal auto components. The group aims to nearly quadruple sales to $26 billion by 2020 and break into the global top ten of autopart makers. By comparision, Aisin Seiki ranked seventh in 2014 with revenue of $25.9 billion. MSSL is expected to generate about 70% of group revenue.

As a global supplier to companies like Daimler, Ford, and Toyota, Motherson Sumi remains a 100% original equipment manufacturer, and is not tied to any single client. "Our core competency is the ability to manage rather than manufacture a particular component,"said Sehgal, 59.

He credits success to a "fantastic" team at Motherson Sumi, sound guidance from Sumitomo, and the ambitious growth targets the company has set itself for its global rise. 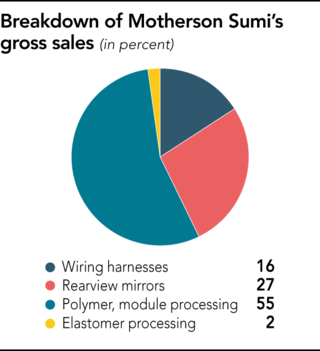 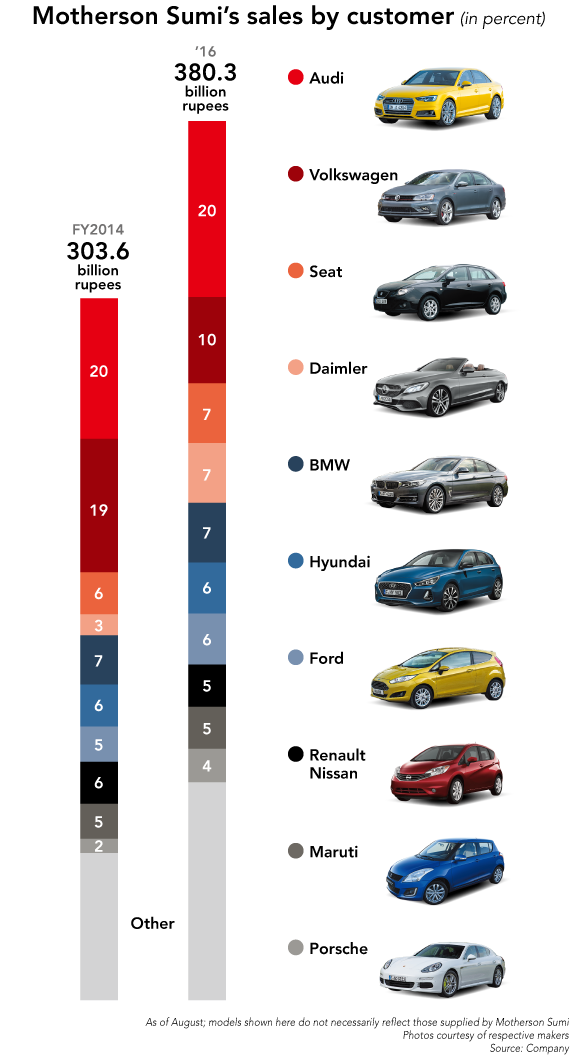 The return on capital employed (ROCE) and dividend payout ratio are both chasing 40%. SMR, MSSL's mirror business, posted over 40% ROCE for the first time in the previous financial year. It was negative when Visiocorp was taken over in 2009.

ROCE is calculated by dividing the earnings before interest and tax by the capital employed. The ratio is a measure of profitability and the efficient use of capital. Analysts say the focus on ROCE is particularly revealing when a company buys a loss-making asset that is turned to profitability.

"MSSL's competence in turning around businesses is evident from the success of SMR and SMP [Samvardhana Motherson Peguform]," said ICICI Securities in a research note on Aug. 12. "The management's strong focus on ROCE augurs well."

After an acquisition, MSSL brings engineering support and decades of experience into play to revive the business. The key objectives are quality improvement and on-time delivery.

Even a machine operator at the company is made aware of how much ROCE is being generated by the equipment being handled. Motherson Sumi recorded overall ROCE of 27% last year, up 1% year on year.

"The reason we chose a five-year plan is because the motor life of a car is approximately five years," said Sehgal, who notes the company is now on its fifth plan and has yet to miss a target.

However, its next project, titled 3Cx15, will be challenging. The company aims to reduce client overdependency and ensure that by 2020 no country, customer, or component contributes more than 15% to revenue.

The Volkswagen scandal broke after the company had already begun consciously spreading its weight. Volkswagen accounted for about 10% of total sales, barely 1% of which came out of North America. Within the Volkswagen Group, however, Audi was the largest client, accounting for 20% of sales.

"We have de-risked our business dramatically," said Sehgal, who expects 3Cx15 to take this further.

With 145 manufacturing facilities, Motherson Sumi already has footprints in about 180 locations in 25 countries, and a presence on six continents. The current five-year plan includes diversification guided by the 3Cx15 initiative, "customer-led" acquisitions, and organic growth. 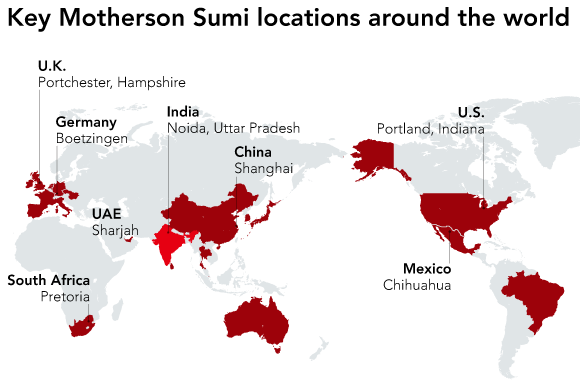 However, the M&A path to diversification and growth is becoming much more costly. According to a report from PricewaterhouseCoopers in January, the total deal value of acquisitions among global automotive suppliers in 2015 was estimated at $48 billion, a 340% increase over 2014 despite a year- on-year decline in the number of deals, which fell 7.4% to 201.

"M&A activity in the automotive supplier industry will likely continue to be fueled by high amounts of available liquidity among corporates and financial investors as well as substantial interest of Chinese/Asian buyers," German consulting company Roland Berger said in its Global Automotive Supplier Study for 2016. On Sept. 17, Motherson Sumi announced in a stock exchange filing that it raised nearly 20 billion rupees from a qualified institutional placement offer between Sept. 8 and 13. Additionally, a preferential allotment of 17.8 million shares worth about 5.6 billion rupees was made in favour of Sumitomo Wiring Systems to prevent dilution of the Japanese partner's stake of 25.6%. "Post this preferential allotment and the allotments under QIP, SWS shareholding continues to remain above 25%," MSSL said in a statement. "The response to the QIP has been extremely encouraging," Sehgal said after the issue's completion.

Since 2009, MSSL has spent about 20 billion rupees on five acquisitions, including Visiocorp and Peguform, for an average of some 4 billion rupees per deal. Prior to the latest capital raising, the company funded growth largely through internal accruals. It diluted once in 2006 by issuing euro 50.3 million in foreign currency convertible bonds. The latest capital raising signals further acquisition activity. In an August presentation, MSSL said it plans to invest in future technologies.

Volkswagen's "Dieselgate" exposed the difficulties automakers face meeting CO2 reduction targets, and has spurred the highly competitive shift from conventional to electric motors. Competitors in Asia include Philippine conglomerate Ayala Corp., which told the Nikkei Asian Review in August it plans to invest $100 million to promote a regional hub for next-generation cars.

"Set a target and then measure yourself by that target -- that is the key to whole Motherson experience," said Sehgal. His focus is on hitting the five-year target and further risk mitigation.