YANGON -- Myanmar's jade exports are surging, fueled by strong demand from China. The country plans to open its mining industry to foreign capital, and is hoping to boost gemstone production and make it a big foreign currency earner. Myanmar's jade exports reached $1.01 billion in fiscal 2013, which ended March 2014, soaring 3.4-fold from a year earlier and accounting for 10% of the overall exports, according to the country's Central Statistical Organization.

Most of the exports are believed to have gone to China, where jade is highly prized. Myanmar's jade exports sank in fiscal 2011 due partly to the introduction of high import duties on the rock in China. But its exports have recovered as strong demand growth continues.

The Myanmar government began working toward revising its mining business laws this year, with an eye toward lifting the ban on foreign investment in mine development. Opening up the industry for foreign capital will likely lead to the introduction of advanced mining techniques and higher production efficiency.

This is expected to further raise the importance of gemstones as a key foreign currency earner after natural gas, which accounts for 30% of the country's exports. The northern state of Kachin, the No. 1 production area for jade in Myanmar, has been suffering from civil unrest. A conflict between the state military and an armed minority resistance has produced more than 100,000 refugees. 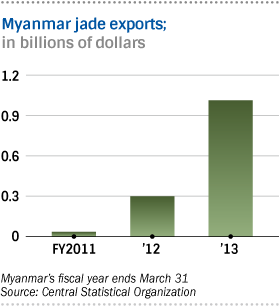 But the Myanmar government has stepped up peace negotiations with the rebels since last autumn. A cease-fire is expected in the near future. The government is likely hoping to make gemstone mining the key industry in its border region if armed conflict ends.

Before Myanmar began democratizing in 2011, the U.S. and Europe imposed economic sanctions. But Beijing maintained close ties with the neighbor, helping economic development by developing hydropower in the border region, for example. There were also reports of high levels of unreported trade between the two countries via smuggling.

Since democratization, China's direct investment in Myanmar has declined, but it still remains the biggest trading partner. Roughly a quarter of Myanmar's $2.9 billion in fiscal 2013 exports went to China.

Jade is one of Myanmar's key export products to China. There are concerns that growth in demand for jewelry products in China may slow, following the issuance of orders by President Xi Jinping to rein in lavish spending.  But jade exports are expected to record strong growth again in fiscal 2014.

This year's Myanmar gems emporium, which opened June 24 in the capital Naypyidaw, saw a 30% increase in the amount of deals struck during its roughly two-week run. Chinese traders looking for jade stones accounted for a lot of that business.