$130bn market has global players jostling for a piece

YANGON -- As a democratizing Myanmar opens itself to the world, foreign capital is starting to flood in, rapidly transforming the long-stagnant of economy of "Asia's last frontier."

The country's eye-watering growth potential is fueling intense competition among foreign companies. Contractors are hungry for a slice of the massive infrastructure market, estimated to top $129 billion. Manufacturers are pouring in to capitalize on the vast pool of inexpensive, high-quality labor. Retailers are rubbing their hands at the expanding number of middle-income consumers.

In a suburb of Mandalay (1), Myanmar's second-largest city, a forest of reinforcing bars fills a lot where Singaporean group Sembcorp Industries has been constructing a thermal power plant since the end of 2015. When completed early in 2018 at a cost of $300 million, the 220,000kW plant in Mingyan will be the country's largest thermal power station.

Sembcorp's executive vice president, Tan Cheng Guan , said Mingyan is the first infrastructure project for Sembcorp to get a foothold in Myanmar.

The penetration rate for electricity is still below 40% in Myanmar. Some 60-70% of that power is generated by hydroelectric plants, the output of which is heavily dependent on seasonal factors. If Myanmar wants to attract manufacturers, it needs more -- and more diverse -- power facilities. 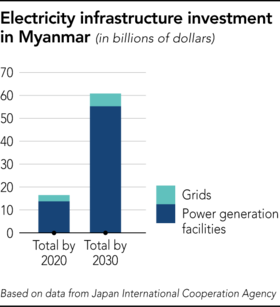 To meet the government's goal of boosting the country's power-penetration rate to 100% by 2030, Myanmar will have to possess an added power generation capacity of up to 25 million kilowatts. For context, that would equal the combined capacity of Japan's Kyushu Electric Power and Shikoku Electric Power.

Before pro-democracy icon Aung San Suu Kyi became Myanmar's de facto leader in March 2016, the government was headed by Thein Sein, who began the country's opening process. Like his successor, he also promoted the development of power generation sources, though most of those projects centered on dams built by Chinese companies. That was a legacy of the close ties built up between the countries when the military ruled Myanmar. Much of the electricity generated by those dams was exported to China, and other foreign companies had few opportunities to invest in energy there.

The construction of the Mingyan plant started with financial support from the Asian Development Bank during the closing days of the Thein Sein administration. Sembcorp, an independent power producer, snagged the deal in Myanmar's first international bid by agreeing to sell electricity to the government. It helped establish a model for using private funds to develop state infrastructure.

Suu Kyi, who officially serves as state counselor, says the cash-squeezed government favors projects with high levels of transparency. The government plans to farm out 80% of power generation by 2030 to independent power producers chosen through international bids, as with the Mingyan project.

International competition for orders worth $60 billion is about to go into high gear. Two players chomping at the bit are U.S. power suppliers APR Energy and Convalt Energy, which in autumn 2016 declared their readiness to build plants in Myanmar capable of generating hundreds of thousands of kilowatts.

According to the ADB, Myanmar's economy grew at an annual clip of 7-8% in 2012-2015, outperforming all other Southeast Asian nations. With all the foreign money that has rushed in since the country began transitioning from military to civilian rule in 2011, Myanmar no longer has the dubious distinction of being Asia's poorest country.

The funds keep rolling in thanks to the high appeal of the new government under Suu Kyi, who is paving the way for further development by promoting political stability and better international relations.

A significant chunk of that investment money is flowing into liquefied natural gas projects now that the government has begun soliciting corporate bids to construct LNG plants. One of the areas reserved for such projects is the Tanintharyi region of southeastern Myanmar, known for its white beaches along the Indian Ocean.

Thailand's largest construction company, Italian-Thai Development, will build an LNG plant in Dawei (2), the largest city in the region. Meanwhile, PTT, a Thai state-owned oil and gas company, will construct an LNG plant in Kanbauk (3), also in Tanintharyi. Each of the two facilities will have a capacity of 2-3 million tons of gas per year.

Both projects are slated to take about five years to complete, though the exact timing has not been decided yet. In spring 2016, ITD won Royal Dutch Shell's agreement to cooperate on its project, while PTT was recently authorized by the Myanmar government to kick off construction.

The two projects are expected to cost a total of 100 billion yen, including the construction of ports and other related facilities.

The heavy Thai investment in Tanintharyi is driven by the fact that production in Thailand cannot keep pace with domestic demand. As such, Bangkok has made developing LNG resources a key component of its energy policy.

Thailand is looking abroad -- including to the Middle East -- for new sources, promoting PTT to construct additional LNG processing facilities on the Bay of Thailand facing the South China Sea. But there are cost and security concerns involved with transporting the commodity from the Middle East, which needs to bypass the Malay Peninsula -- an area known for piracy. Importing LNG by land from Tanintharyi would greatly slash transport distances.

PTT is already sending LNG to Thailand via a pipeline connected to its offshore operations, and Myanmar hopes to use Thai-built LNG plants for domestic consumption.

An ITD project engineer said the area around Dawei, a gateway to the Indian Ocean, is the best location in Southeast Asia for LNG operations. 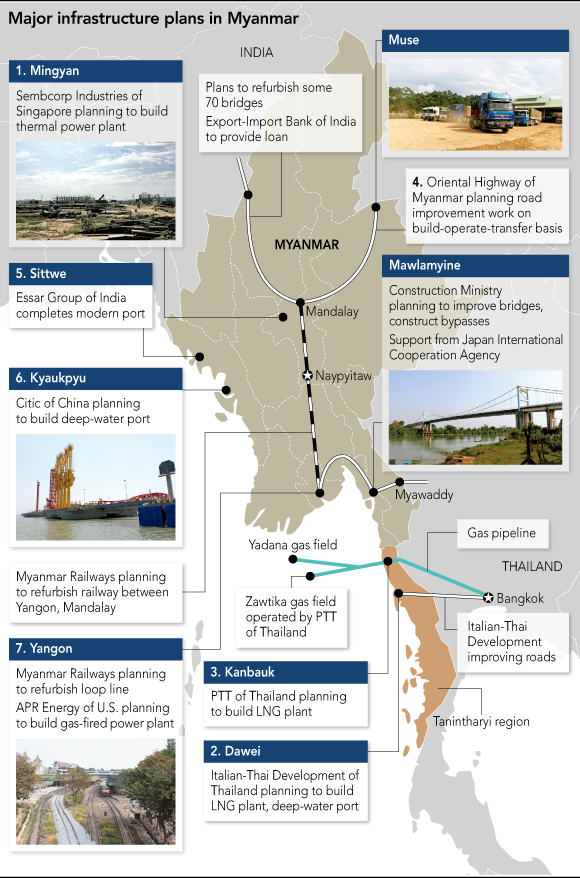 The ministry adopted a plan last summer to build 12 major roads and seven large bridges in the next five years. At the core of the plan is a road linking Myanmar with neighboring countries.

Myanmar occupies prime real estate, bordering China, India and member states of the Association of Southeast Asian Nations. But despite its strategic location, it was long ridiculed as a "missing link" due to the slow pace of road construction under the military government.

Advances in democratic reforms have helped change that situation. Today, Myanmar is rapidly becoming a corridor connecting the gigantic markets of China, India and ASEAN.

Myanmar signed an agreement with China to build roads in Shan State (4), in the northeast, when Suu Kyi visited the country in August last year. On a visit to India in October, she won an agreement from the Indian government to repair and improve about 70 bridges in areas along their border. The Beijing-led Asian Infrastructure Investment Bank and the Export-Import Bank of India will consider extending loans for the projects.

The ADB estimates that Myanmar will need up to $60 billion for logistics infrastructure improvements by 2030. For road projects, the government will encourage participation by private companies on a "build-operate-transfer" basis, Construction Minister Khaing said.

The push to develop roads is expected to boost business opportunities for related sectors, including building material suppliers and bridge construction companies.

The Port of Yangon has long been Myanmar's sole major port, processing 90% of the country's exports and imports. But a new facility at the mouth of the Kaladan River will open in January to link the western city of Sittwe (5) and northeastern India. India's Essar Group is heading the project.

In Kyaukpyu (6), west of Sittwe, China's Citic is preparing to construct a large deep-water port.

Also in need of revamping are Myanmar's railroads. Although the rail links sprawl over some 6,000km, many are aging -- built during the days of British colonial rule -- and do not use electricity.

The state-owned Myanmar Railways plans to repair and improve the 620km trunk line between Mandalay and Yangon (7), the country's biggest city, and the 50km loop line in Yangon. It is considering replacing more than 200 train cars and upgrading the tracks and signal control systems.