Myanmar's jade slump points to a pivot away from China YANGON -- The once-warm ties between Myanmar and China appear to be cooling under Myanmar's new government-led by State Counselor and Foreign Minister Aung San Suu Kyi.

Though long thought as pro-China, Myanmar has hardly been a vocal supporter of Beijing regarding South China Sea disputes. In fact, Myanmar looks to be distancing itself from its northern neighbor in stages as the new government reviews its diplomatic and economic policy.

Jade is one of Myanmar's key export industries and have long been a symbol of its close economic ties with China, which buys roughly 90% of its shipments. But trade has been faltering, and the government is showing no signs of trying to boost the business. The industry's decline suggests Suu Kyi and Co. have a new direction in mind for the country.

Representatives from hundreds of mining companies and retailers gathered in Naypyitaw, the capital, from June 24 to July 6 for the 53rd Myanmar Gems Emporium. The event, sponsored by the Ministry of Natural Resources and Environmental Conservation, is the country's biggest gem fair and has been held annually since 1964, when Myanmar was a socialist state. 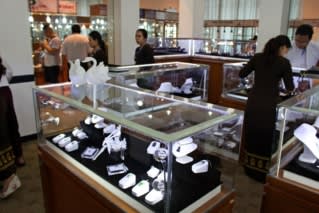 Gems and jewelry are displayed at the annual trade fair. (Photo by Motokazu Matsui)

The participants showed off their wares in a space roughly the size of the Tokyo Dome baseball stadium. Myanmar is the world's biggest producer of jade, so it was no surprise that the stone accounted for the bulk of sales there, with 6,000 pieces auctioned off.

Slabs of uncut jade were displayed in a heavily guarded room at the venue. Drawing the most attention was a stone produced in Hpakant, in the northern state of Kachin, for which bidding started at 6.8 million euros ($7.54 million).

Many of the buyers were Chinese brokers from Hong Kong and Guangzhou, who could be seen carefully inspecting the stones with small flashlights.

In China, Myanmar jade is often prized more than diamonds. Until recently, given China's massive demand, the stone ranked alongside natural gas as Myanmar's most important export item, and the annual gem show was a huge national event.

But the mood at this year's gathering was distinctly downbeat. "The fair has been a disaster from the first day," lamented a 73-year-old jade trader who participates in the show every year. "The number of Chinese coming here to buy jade has plunged. I'll be happy if sales reach 70% of last year's."

He had reason to complain: Jade sales at this year's emporium totaled 530 million euros, down 40% from last year.

Business at the fair took a noticeable turn for the worse two years ago, said the trader, with last year marking the worst ever since the country began its democratization push. But things are even bleaker this year, he said. To make up for weak jade sales, he said he plans to start handling more pearls and amber.

Money that used to buy jade is now going into real estate, said a broker from Guangdong Province. He attributed the shift to Beijing's crackdown on extravagance and corruption under President Xi Jinping. China imposed new restrictions on the domestic jewelry trade in 2014, and these extend to loans by domestic lenders to jade importers, he said.

A broker from Hong Kong took out his smartphone and showed this writer a photo of a large jade stone from last year's trade fair. Tellingly, the same stone was still up for sale this year. The photo showed the bid price starting at 500,000 euros. This year, it was 200,000 euros, a 60% drop.

Business is also slumping in the jade-producing areas of northern Myanmar, such as Myitkyina and Mandalay. In the days of military rule, Chinese traders flocked to local markets there. Today, the number has fallen off drastically. A trader in Mandalay said retail prices of the stone have tumbled by more than half over the past two years. Buyers take a closer look at some of the products on offer. (Photo by Motokazu Matsui)

The jade funk underscores Myanmar's heavy reliance on Chinese demand. In addition to being Myanmar's top customer for the precious stone, China is also its No. 1 or No. 2 market for such key exports as natural gas and rice. The prices of these commodities are therefore heavily influenced by China's buying appetite.

The economic relationship was especially tight when Myanmar was under military rule and isolated from the international community. It was during those years that Chinese companies pumped huge sums of money into natural resource and other development projects in northern Myanmar. At one point, China accounted for 90% of foreign investment in the country.

Things began to shift, however, when Myanmar started transitioning to democratic rule in 2011 and the administration of then-President Thein Sein sought to improve relations with the West. Still, while Myanmar's dependence on Chinese demand has waned, China remains its biggest source of trade and investment.

The close trade ties have not necessarily won China a lot of friends in Myanmar, however. That is because the benefits of their trade relationship tilt heavily in China's favor.

Take, for example, the ill-starred Myitsone dam project in northern Myanmar. China wanted to import 90% of the electricity generated there to China. Unhappy about the arrangement, local residents frequently staged protests. Ultimately, the Thein Sein government froze the undertaking in autumn 2011.

The same imbalance is found in the jade trade. On paper, the main players involved are domestic companies affiliated with the military or the former junta. In reality, however, many of these concerns are joint ventures with Chinese partners who call the shots, according to people familiar with the situation. The upshot is that the jade produced by these companies usually ends up being shipped to China, with little, if any, of the profits trickling down to the people of Myanmar.

"I acknowledge China's economic contribution to Myanmar, but I hate Chinese people," said one jewel trader, echoing a widely held sentiment in Myanmar.

That brand of antipathy may be shaping the cool diplomatic stance Myanmar has adopted toward China since Suu Kyi effectively took control of the government at the end of March.

China's Wang Yi visited Myanmar in April, becoming the first foreign minister to do so since the new government took power. Although Suu Kyi has not snubbed China, she has refused to accede to Beijing's demands to resume the Myitsone dam project.

In her communications with the international community, Suu Kyi frequently refers to Myanmar's past policy of "nonalignment and neutrality." This 51kg slab of jade is priced at over 6 million euros. (Photo by Motokazu Matsui)

Suu Kyi's foreign visits have been limited to members of the Association of Southeast Asian Nations, such as Laos and Thailand. Members of that regional bloc are roughly divided into two groups, based on their stances toward China. The Philippines and Vietnam want to keep China in check due to their territorial disputes with Beijing in the South China Sea, while Laos and Cambodia are basically friendly toward China because of their heavy reliance on economic assistance from the world's second-largest economy.

Much like Myanmar, some ASEAN members have also been changing their attitudes toward China recently. Indonesia and Singapore, for example, have shifted from a neutral stance and moved closer to that of the Philippines and Vietnam since Manila filed a suit with an international tribunal in The Hague over China's territorial claims over most of the South China Sea.

Myanmar, once lumped in with Laos and Cambodia as being more pro-China, has adopted a more ambiguous posture. Suu Kyi did not attend a special foreign ministerial meeting between China and ASEAN in the southern Chinese province of Yunnan on June 14. While Cambodia voiced its support for China in its maritime dispute with the Philippines, Myanmar kept quiet.

It is true that the Thein Sein administration aimed to reduce the country's dependence on China, but Myanmar has only grown more aloof toward its neighbor since those days, a diplomatic source said.

That change has had a direct impact on the jade trade. In the run-up to the general election last autumn, Suu Kyi criticized the opacity plaguing natural resources development. There is little doubt she was referring in part to the jade trade, so deeply shot through with Chinese interests.

Prior to the launch of the new government, Suu Kyi merged the mining ministry, which used to oversee the development of jade, with the environment ministry to form the Ministry of Natural Resources and Environmental Conservation.

In May, the government limited the number of vehicles and heavy machines that jade developers can own, citing the need to conserve resources. The following month, it announced that mining companies operating in major jade-producing areas will be required to conduct environmental research when they seek to extend their licenses.

The new measures are expected to work against the vested interests of Chinese companies and slow jade exports. 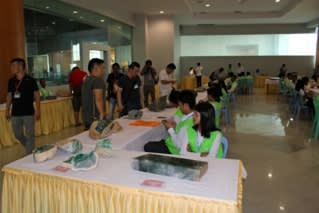 Buyers stroll among the display booths at the Naypyitaw gem fair. (Photo by Motokazu Matsui)

In April, after the new government had taken power, Suu Kyi said in a message to the public that it is more important to nurture human resources than natural resources, which will eventually run dry. She is wary of the country's reliance on natural resources, and is looking instead to manufacturing and agriculture to create jobs and promote the transfer of technology.

Even if the Chinese economy picks up, the powers that be in Naypyitaw are unlikely to try to pump up jade exports, a diplomatic source said.

The growth of the jade industry that accompanied the economic and diplomatic honeymoon between Myanmar and China is a legacy of the "old Myanmar" developed under military rule. In the "new Myanmar" taking shape under Suu Kyi's watch, the jade trade has lost much of its symbolic significance and is likely to decline as a consequence.