Despite initial optimism over Thailand's military-led government, businesses have not had much to cheer about. (Photo by Ken Kobayashi)
May 20, 2015 23:00 JST | ASEAN
CopyCopied

One year on from its latest military coup, Thailand is struggling with weak business sentiment and a lackluster economy. These problems are not all due to the events of May 22, 2014, which saw a new military-led government take control, but are in fact linked to a prolonged political crisis dating back a decade.

The government, led by Prime Minister Prayuth Chan-ocha, a retired army general, has prioritized political security over economic prosperity. For the year ahead and beyond, the country's businesses and economy are likely to stay on a subpar growth trend that will leave the government no room to address the urgent matter of boosting the nation's competitiveness.

That said, Thailand's prime geographical location and solid domestic demand will undoubtedly help the country ride out the doldrums as it muddles along in search of a resolution to its political problems. 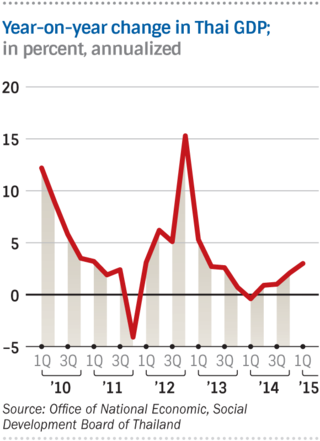 While the Thai economy grew just 0.7% in 2014, the growth forecast for the current year is 3.6%, downgraded from the 4% projected at the outset of the year. Surpluses in the trade and current accounts, record-high international reserves, and stable exchange rates, wages and inflation have served as macroeconomic anchors. And the nation's technocratic macro-policy institutions, with the Bank of Thailand at the center, provide the ultimate backstop for economic deterioration.

Over the past year, sentiment among the local and foreign business communities has been mixed. Almost by necessity, they initially heaved a collective sigh of relief when the coup came after six months of street protests in Bangkok that paralyzed the government of then-Prime Minister Yingluck Shinawatra. After so much turmoil, businesses generally welcomed the coup. The Prayuth government immediately enforced order, pledged policy directions on infrastructure development and the digital economy, and launched an anti-corruption drive by strengthening corporate governance.

But one year on, the rationale that the coup is good for business no longer holds. Policy pledges on massive infrastructure projects and the creation of a digital "promised land" have not yet been made good on. The lack of coherent, longer-term growth strategies is becoming painfully evident. Moreover, Thailand's glaring shortcomings in international compliance in the aviation and fisheries industries have surged to the fore, with the European Union issuing a "yellow card" warning on Thai fishing industry practices and placing international safety restrictions on Thai airlines.

Human trafficking and poor treatment of migrant workers have only added to the spate of bad news and highlighted the fact that many Thai exports still rely on keeping expenses down at any cost. Although it is neither tanking nor buoyant, the economy appears rudderless.

Where are the technocrats?

That economic management is not more effective is attributable to the coup itself. Unlike past military takeovers, the generals this time rule the country directly, as opposed to appointing proven policy experts and technocrats to run the economy. Thailand had a capable team of technocrats that instituted far-reaching economic reforms during previous coups, especially in the 1991-1992 period, when troubled infrastructure projects were cleaned up and set right. The country's first value-added tax and taxi meter system are just two legacies of that technocratic era.

This time around, the military government has put its own top brass in charge of such economically crucial portfolios as transport, commerce, education and labor. The handful of technocratic ministers in this regime are old-timers from the previous junta of 2006-2007 and lack the dynamic vision needed for Thailand's role in the global economy of the 21st century. With the economy largely being overseen by career police and military officials, it is no surprise there is a woeful neglect of urgently needed reforms to make the Thai economy more competitive. Take exports. The government is correct in attributing the slide in outbound shipments to slumping global demand, cyclical swings in commodity prices and the strong baht (although the Thai currency has fallen nearly 4% against the dollar since March). But that view holds true only as long as exports remain at the low value-added end of the spectrum, where cost advantages are key.

Driving costs down through short-term measures -- such as the widespread employment of inexpensive migrant labor or finding new sources for cheaper, lower-quality inputs -- comes at the expense of a longer-term shift toward improved efficiency and productivity.

Competing at this low-cost, labor-intensive end of the economic spectrum renders Thai exports highly sensitive to swings in global demand. And when the government keeps trotting out the usual arguments of weak international demand and a strong currency, it only puts off much-needed internal reflection on why Thai exports fell an annualized 4% in the first quarter of 2015 while Singapore's jumped a record 18.5%. That Singapore's exports are driven by much higher productivity-driven goods and services, which are less subject to price swings, should be a compelling argument for why Thailand is far overdue in creating a long-term vision for growth.

But the military-led government seems to think other matters -- such as those related to security -- are more pressing than where the economy will be, say, 10 years from now. While the country tries to navigate its challenges, there should be no illusions or artificial hope for a sustained rebound in business and economic growth until the political crisis is sorted out. 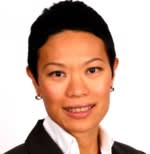