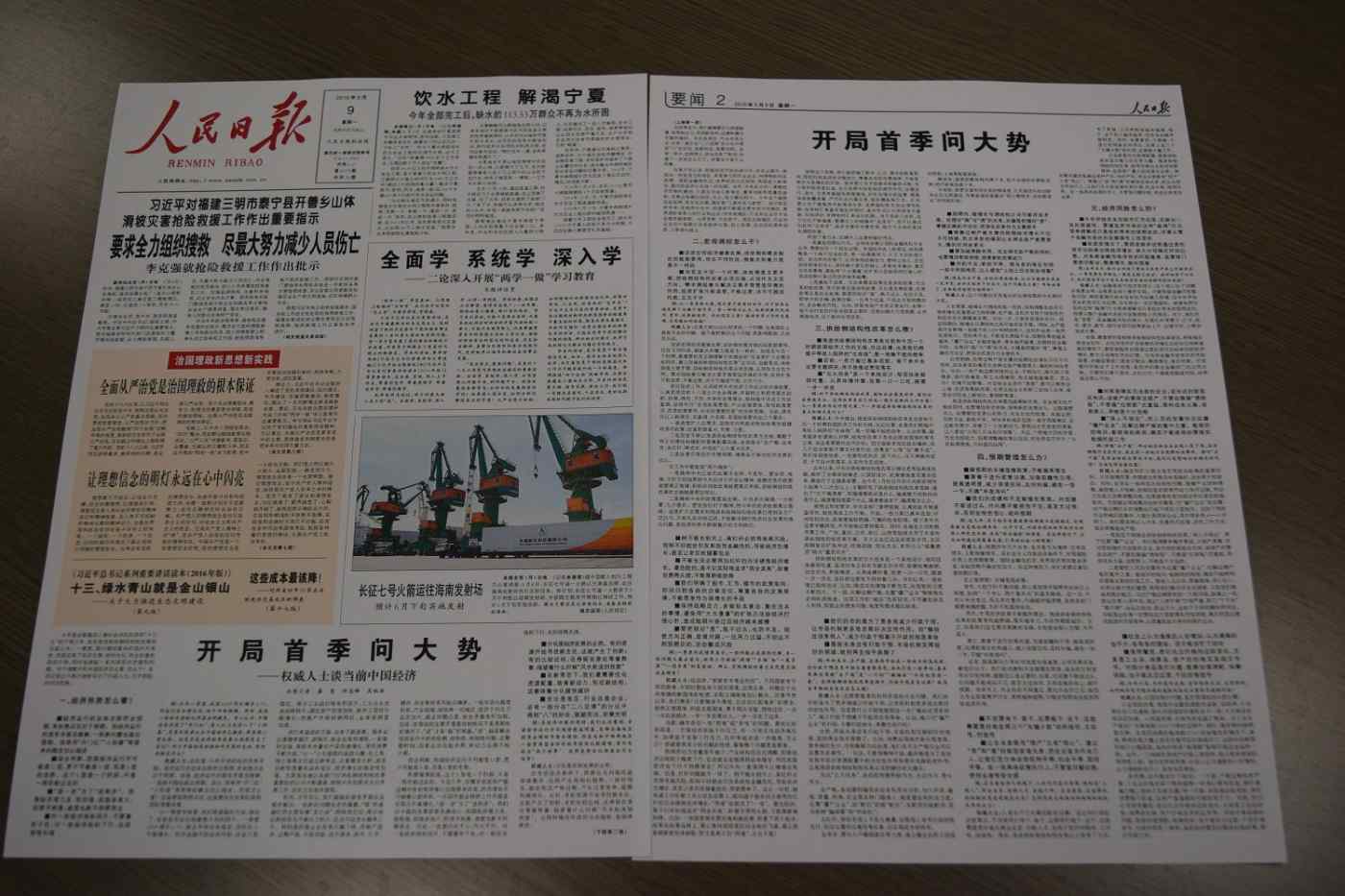 HONG KONG -- An anonymous high-ranking Chinese Communist Party official shook up markets Monday by indicating that the government will focus on structural reform even at the cost of short-term growth, sparking speculation about the figure's identity.

The source, referred to only as an "authoritative" person, asserted in an extensive interview with the People's Daily official party newspaper that China's problems have not been fixed despite the stability seen in the January-March quarter. The economy likely will undergo an L-shaped recovery for the next few years, the source said, arguing that a U-shaped or V-shaped recovery is too tall an order given the difficulties posed by sluggish demand and excess capacity.

Supply-side reforms such as letting "zombie" companies fail will open the door to sustained growth even if they prove a short-term hindrance, the source said. The person also suggested that monetary easing should be avoided, since it can fuel bubbles, and warned that high debt levels pose a serious risk.

Some market players see the article as Beijing signaling a policy shift. The government launched new construction projects around March even as authorities advocated putting reform first. Other recent steps essentially amount to stimulus, such as pushing banks to lend more. The interview was meant to pull the policy focus back to reform from growth, and to warn the public and markets to brace for temporary pain, the argument goes.

Stock markets were naturally disappointed. The Shanghai Composite Index sank nearly 3% Monday. The government likely will shy away from stimulus and accelerate reforms, and the recovery in investment -- which has relied on ballooning debt -- will be short-lived, said Zhao Yang of Nomura International (Hong Kong).

Who is the anonymous official causing so much fuss? A Hong Kong newspaper noted this is the third appearance by an "authoritative" source in the People's Daily in the past year, following instances on May 25, 2015, and Jan. 4. The newspaper observed that the term typically refers to someone who plays a direct role in policymaking. The name of Liu He, President Xi Jinping's main economic adviser, has been bandied about among China watchers.

Liu heads the Office of the Central Leading Group for Financial and Economic Affairs, China's top decision-making body for economic management. Seen as one of Xi's closest aides, Liu fleshed out the new Silk Road project spearheaded by Xi and is rumored to be poised to join the Politburo in 2017. Liu spoke with U.S. Treasury Secretary Jack Lew in January about turmoil in Chinese financial markets, bypassing Premier Li Keqiang, who is supposed to hold the reins on economic matters.

Liu, who holds a master's degree from Harvard University's Kennedy School of Government, has a reputation for focusing on market-oriented reforms, according to Hong Kong newspaper South China Morning Post. This fits with the image of the "authoritative" source in the People's Daily interview, who said that China cannot solve its structural problems with monetary easing.

The Q&A session made clear that stark differences of opinion on policy direction exist within the government's top ranks, Mizuho Securities Asia said. Some see the article as criticism of Li -- who is believed to be behind the efforts in March to shore up the economy -- by allies of Xi. Mao Zedong apparently used the "authoritative figure" term in the 1940s, during the Chinese Civil War, to avoid putting his name on newspaper articles attacking Chiang Kai-shek.

Chinese investors generally have supported reform, though with authorities intervening more actively -- including shoring up prices during last summer's stock market plunge -- some are more taken with Li's preferred approach of government support as needed. Whether Monday's sudden call to let markets decide will change the situation anytime soon remains to be seen. Nervous market players will watch the power struggle in Beijing closely.