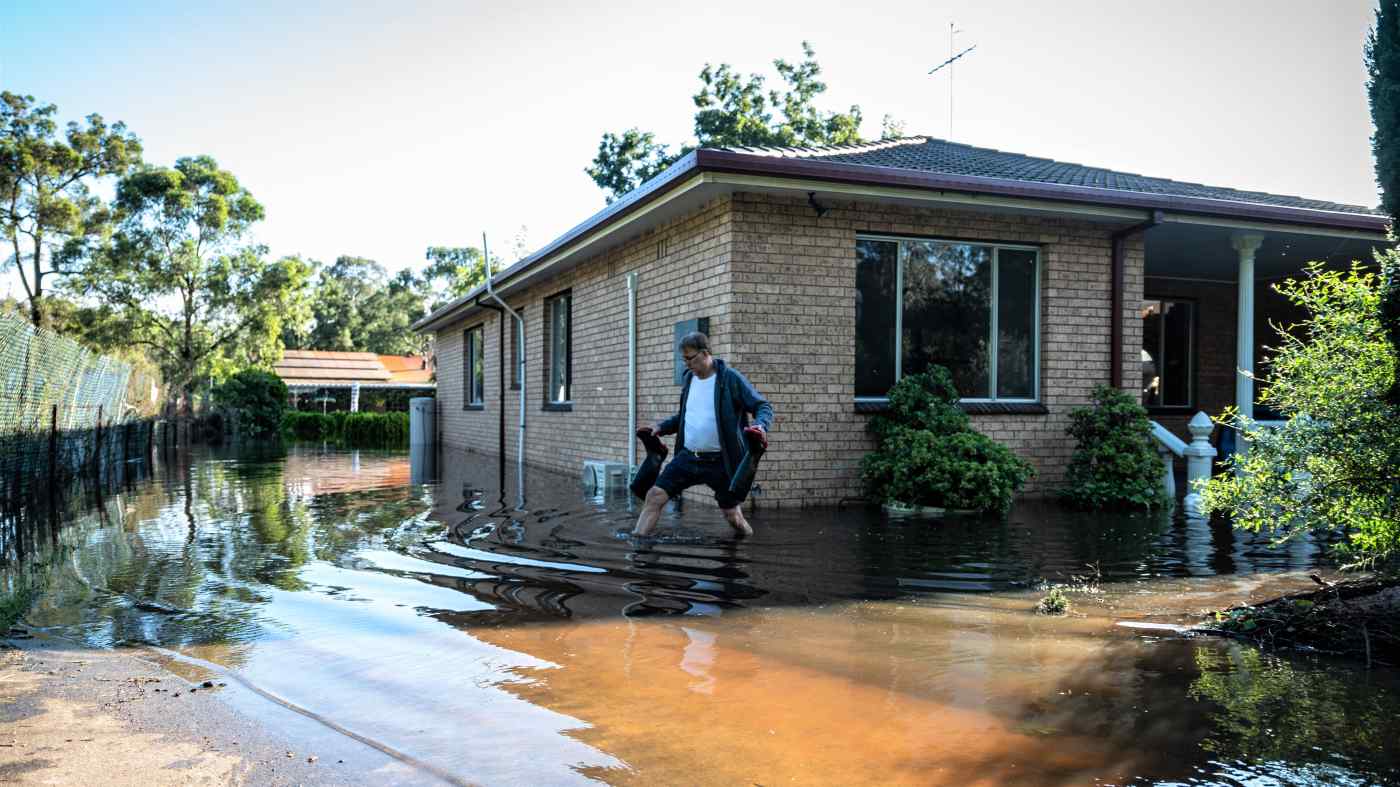 SYDNEY -- As Australia counts the multibillion dollar cost of the once-in-a-century rains that have flooded large parts of its east coast communities this week, experts are warning that even greater calamities lie ahead if Sydney's expansion onto a crucial flood plain is left unchecked.

He said a blanket ban was needed for areas below the 1-in-500-year flood level, and people should not be allowed to rebuild "as was."

The Insurance Council of Australia says it has already received more than 14,000 claims related to the ongoing floods in New South Wales and southern Queensland, with more expected as residents return to their properties. "This remains an active natural disaster and it will take some time to gain a clearer picture of the damage," the council's CEO, Andrew Hall, said.

The national Bureau of Meteorology warned on Wednesday that the flood emergency was not over, even though the rain has eased in some places. It said large volumes of floodwater were still making their way through river systems and some areas were yet to see their flood peaks.

"The flood situation remains a serious threat to life and property across New South Wales, and will continue to cause significant disruption and isolation," the bureau said.

Rain-heavy weather systems known as East Coast Lows are a perennial flood risk along the east coast and can dump as much as half a year's worth of rain in a week -- as witnessed this month. Thousands of people have been evacuated from declared disaster zones across New South Wales in the past few days. 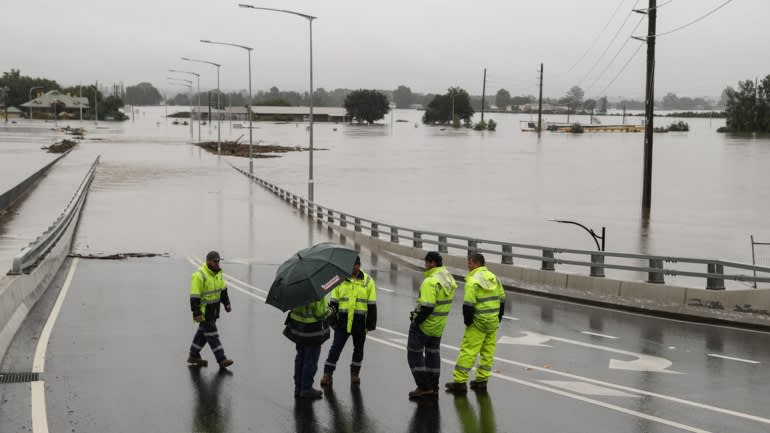 The AU$130 million New Windsor Bridge in a Sydney suburb was designed to withstand flooding better than the one it replaced, but slipped underwater on March 22.   © Reuters

Apart from a likely AU$2 billion-plus ($1.5 billion) worth of housing insurance claims, New South Wales coal exports through the port of Newcastle have been interrupted by weather damage. The state's top farming body, NSW Farmers, is warning that livestock, pasture and crop losses, plus damage to farm infrastructure, inevitably will lift the cost of food in the months ahead.

While the floods affect scores of communities along the east coast and inland, the biggest economic impact is in Sydney, the country's largest city.

With a population of 5.4 million, the Greater Sydney area is home to more than 20% of Australia's total population of 26 million and is a key economic growth engine, responsible for almost a quarter of the country's gross domestic product.

Its economic opportunities are a magnet for still more people. But large national parks to the north and south of the city create a natural development buffer, forcing housing and industrial estates to steadily creep westward to the foothills of the Blue Mountains, 50 km inland.

This puts them in a 450 sq. km flood-prone valley that follows the course of the merged Nepean and Hawkesbury rivers. The rivers wind their way for 180 km in a great arc from the Nepean's source in mountains southwest of Sydney to Broken Bay, where the Hawkesbury River meets the ocean about 50 km north of Sydney. In 2007, the state government set a building level on the flood plain equal to a 1-in-100-year flood, but thousands of existing homes lie beneath this threshold. The last big floods there were in 1961, but a super-flood in 1867 saw water levels at Windsor on the Hawkesbury River reach 19.7 meters, equivalent to a 1-in-500-year flood.

The Insurance Council of Australia has identified the flood plain as having the single highest flood exposure in New South Wales, and possibly Australia.

This month's floods come as Australia seeks to adapt to changes in its economic circumstances. After almost three decades of uninterrupted prosperity since 1991, a combination of widespread drought, devastating bushfires in 2019-20, an ugly slide in relations with China and the impact of the coronavirus pandemic saw Australia slip into a rare technical recession by June 2020.

The China tensions wiped out billions of dollars in export income from thermal coal, cotton, barley, seafood, wine and timber, while COVID-19 caused income losses from domestic lockdowns and bans on international tourists and students.

The picture has brightened, with an economic upturn driven by confidence that a vaccine rollout that began this month will contain the virus. Australia's isolation and strict quarantine measures have kept coronavirus case numbers very low anyway, compared to the Northern Hemisphere.

Still, government income support measures for people and businesses affected by the pandemic will start to taper off from the end of March, and the floods in New South Wales and southeast Queensland will be another blow to sectors such as agriculture and tourism. Prime Minister Scott Morrison on Monday authorized disaster relief payments of AU$1,000 ($760) for adults and AU$400 for children in flood-hit jurisdictions. 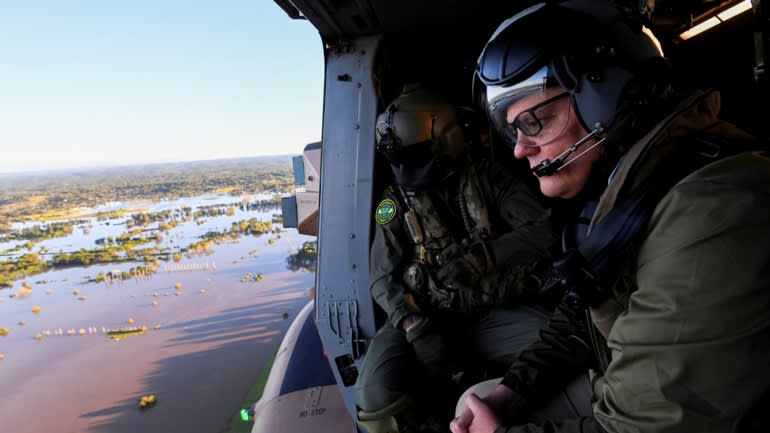 For local governments trying to manage both the Sydney housing boom and natural disaster risks, the floods serve as a warning. ANU's Pittock, a professor in the university's Fenner School of Environment and Society, said there were no safe areas for building houses on the Hawkesbury-Nepean Valley floor, though development was possible on higher ground overlooking the valley. He said that "poor governance" had allowed people to build homes in flood-prone areas, and that climate change was likely to increase the frequency of dangerous floods.

"This crisis might shake up the government. We could be at a tipping point," he told Nikkei Asia. He said retreating from the flood plain would give the river "room to flood" and could boost opportunities for high-value agriculture, recreation and nature conservation. "It is such good soil, and well-watered for high-quality food production."

Professor Elizabeth Mossop, dean of the School of Architecture, Building and Design at University of Technology Sydney, said it was a government responsibility to keep people out of harm's way, and allowing them to build new houses on the flood plain "directly contravened" this.

She told Nikkei Asia: "Understanding urban flooding requires us to contend with the underlying natural systems over which we have built our cities and towns."

David Littleproud, the federal government's emergency management minister, said this week the New South Wales state government needed to get tougher with its planning decisions and their implementation by local councils.

About 130,000 people now live on the flood plain, including residents of 5,000 homes built in low-lying areas that are at risk in a 1-in-100-year flood. New South Wales Planning Minister Rob Stokes has ordered a pause on plans to build housing for another 130,000 new residents by 2050. Orange orchards and houses are submerged near the Hawkesbury River in northwestern Sydney on March 23.   © Reuters

Housing approvals in high-risk areas need to stop, according to Ian Dinham, president of Floodplain Management Australia, a network of water professionals representing private and public enterprises. He said in a commentary this week that beyond the economic damage, there would be a "huge social impact" on people who lost everything in floods.

Dinham warned that in extreme floods, water in the Hawkesbury-Nepean Valley could hit 7 meters above the existing floor levels of new houses. "That is higher than the roof in single-level houses," he noted.

About 2.5 million people now live in Greater Western Sydney, with the figure predicted to reach 3 million by 2036 as urbanization advances. The AU$5.3 million Western Sydney international airport is due to open in 2026, and is expected to become a new hub for technology businesses. New rail and road links are being built to serve the airport, and more than 40,000 students are studying at Western Sydney University's 10 campuses in the area.

All this suggests the push for more housing land is unlikely to fade. But a stark reminder of nature's power came early in the flood crisis.

On Monday, the road surface of the AU$130 million New Windsor Bridge -- opened last May as a flood-resilient replacement for a bridge built across the Hawkesbury River in 1874 -- slipped below the water.