TOKYO -- One of the most powerful typhoons ever to threaten eastern Japan has triggered widespread train and flight cancellations and prompted factories, stores and tourist attractions to shut down ahead of its possible landfall Saturday.

East Japan Railway, the operator of Tokyo's heavily traveled Yamanote loop line, said it will suspend regular train service in the capital region by about 1 p.m. on Saturday,

Service is projected to resume Sunday afternoon, but delays are possible, depending on the storm's damage.

The Tokaido Shinkansen bullet train will cancel all trips Saturday between Tokyo and Nagoya. Other bullet train lines will suspend or cut back on service as well.

Among the travelers weighing their options is Agnes, a Swedish lawyer spending a two-week honeymoon in Japan at what she called the "worst time." The couple arrived in Tokyo on Friday afternoon by bullet train. A sign at Nagoya Station warns travelers that bullet train service to Tokyo will be suspended on Oct. 12.   © Kyodo

The Japan Meteorological Agency has designated Typhoon Hagibis as a "very strong" storm, threatening record wind gusts and torrential rains. No typhoon hitting eastern Japan has received such a designation in records going back to 1991.

Air travel has also been affected.

All Nippon Airways has cancelled all of Saturday's domestic flights at the Tokyo area's Haneda and Narita airports. Most international flights will be grounded, outside of those scheduled for early morning or late night. Japan Airlines has cancelled most fights at the two airports.

Both Tokyo Disneyland and Tokyo DisneySea will close their doors to visitors on Saturday, park operator Oriental Land said Friday. It is the first time the two theme parks have shut down since 2011, during the aftermath of the earthquake and tsunami. 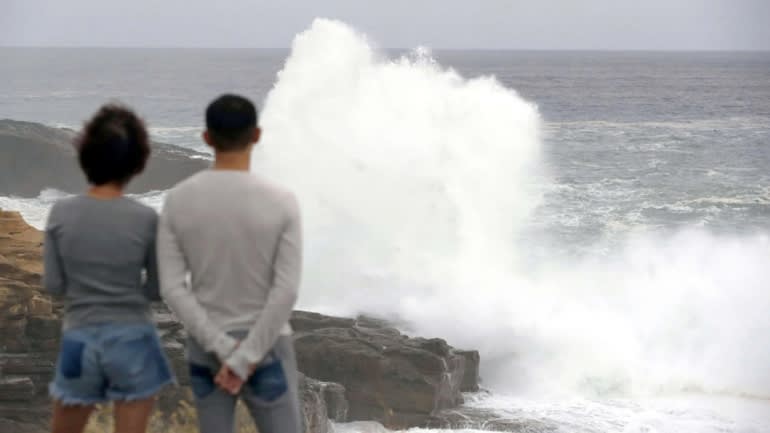 Typhoon-driven waves crash against the shores of the town of Shirahama in central Japan on Oct. 11.   © Kyodo

The Rugby World Cup will cancel two games on Saturday, a decision that has been subject to criticism from international media. Stuart Bathgate, a columnist for the U.K. daily The Scotsman, wrote that the games should have been moved to other cities or rescheduled as part of contingency plans for typhoons.

"Japan is not a small country, nor is it an unsophisticated one," wrote Bathgate. "The imminent arrival of a typhoon is not an unprecedented event, nor was Japan given the right to host the World Cup with just a couple of weeks' notice."

One World Cup spectator from France was dejected that his country will not play in the match against England on Saturday. The typhoon will keep the 51-year-old stranded at the hotel that day, though the fan is determined to see the Japan-Scotland match on Sunday -- as long as the weather clears.