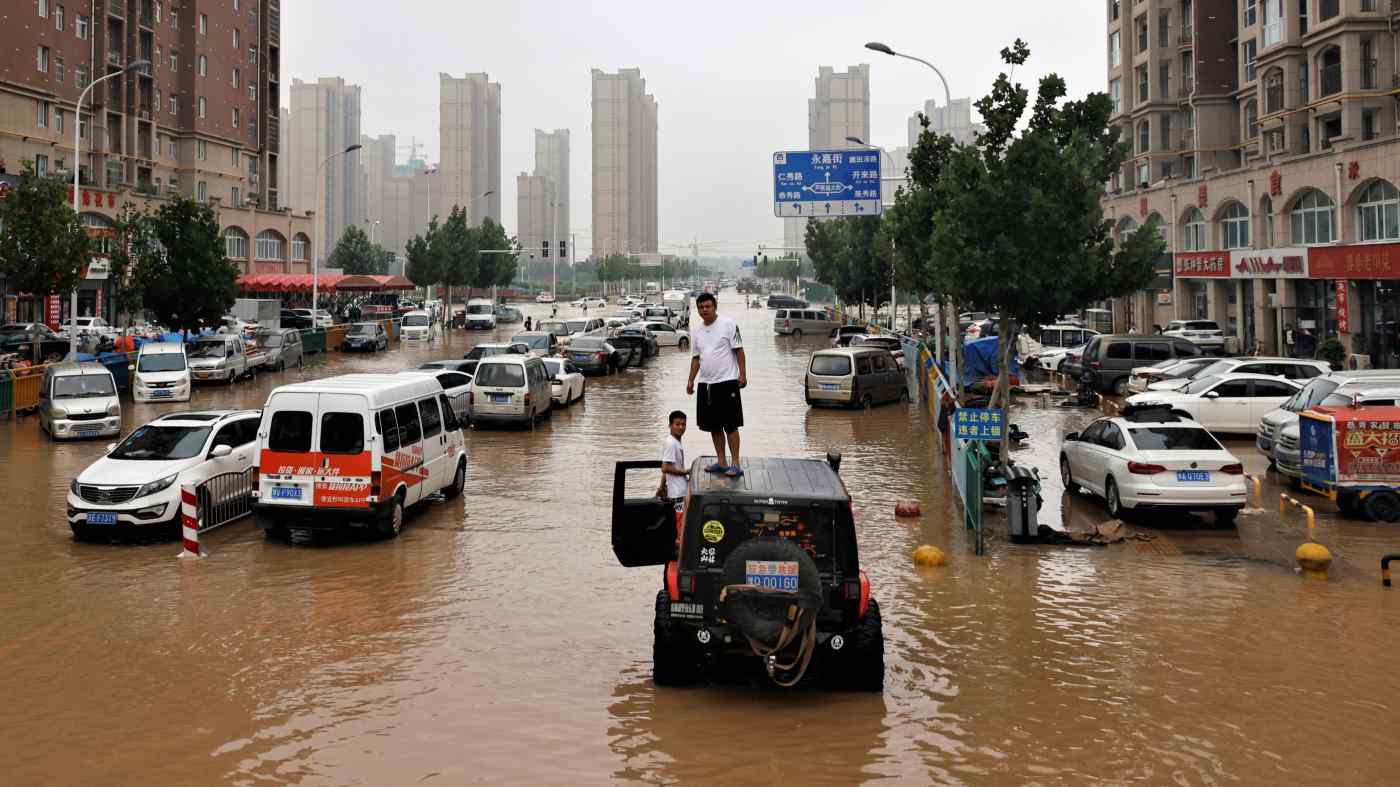 SHANGHAI -- Severe flooding in central China has prompted a social media outcry for official accountability, while a new typhoon heads for the country's east coast.

"Have you seen him?" a woman wrote on the Chinese microblogging site Weibo on Wednesday morning, posting a photo of her husband, Sha Tao.

Sha was one of the few still missing as of publication time. The city of Zhengzhou's Subway Line 5 was inundated on Tuesday evening, killing at least 12 passengers.

Across the capital city of China's central Henan Province, many victims of the devastating flood were demanding to know why the subway was not shut down as the waters rose on the streets above.

Zhengzhou Metro, in a statement posted on Weibo on Thursday, blamed the disaster on a "rare heavy rainstorm" that caused water to break through a retaining wall at Shakou Road Station at 6 p.m. local time, trapping over 500 passengers.

"Why didn't you close the station immediately when water began to seep in between 3 p.m. and 4 p.m.," one social media user named Queyibuke asked in response.

"A dozen passengers have died and no one is taking responsibility," wrote another.

Survivors shared video footage showing passengers trapped inside dark train carriages in shoulder-deep water, waiting to be rescued. Some who lost hope after being stuck for four hours sent final WeChat messages to their families.

The flooding appears to be subsiding in Zhengzhou, but local authorities in the city of Xinxiang to the north of the provincial capital issued an evacuation alert on Thursday, after over 90 villages were flooded. Local media reported that a Wei River dam in the city burst on Friday morning.

The flooding has killed 33 people so far and affected over 3 million people across the province with a population of 96 million. Economic losses are estimated to have reached 1.22 billion yuan ($188 million) based on 215,200 hectares of damaged crops alone, an official said on Thursday.

Authorities blame the disaster on rainfall that started on Saturday and was compounded as Typhoon Cempaka hit Guangdong in southern China on Tuesday.

Floods are one of the most frequent natural disasters in China, according to a report published by The Lancet science journal in October. The article pointed to climate change as a factor that is raising the risks.

"Most floods in China, including the flooding in 2020, are caused by extreme precipitation," the report said.

China's huge number of dams -- 23,841 according to the Paris-based International Commission on Large Dams -- has stirred debate among environmentalists and scholars. Many were built after the founding of the People's Republic of China in 1949, mainly for irrigation, flood control and power generation.

"We find that the accumulated negative environmental effects of constructed dams have increased significantly," the journal Science of The Total Environment wrote last month. This has "led to large-scale hydrophysical and human health risk affecting the Yangtze River Basins downstream and reservoir areas."

Such concerns have not stopped the dam-building, however.

Earlier this month, the government completed the Baihetan Hydropower Station in western China, touted as the world's second-largest after the Three Gorges Dam, also in China. It is located in the upper reaches of the Yangtze River, the country's longest waterway.

The Yangtze's downstream cities, including Wuhan, were badly hit by flooding last summer.

Meanwhile, more rain is heading in China's direction. The National Meteorological Center issued an alert on Friday, warning about Typhoon In-Fa -- the name means "fireworks" in Chinese. The storm is expected to hit the country's east coast cities, including Shanghai, with heavy rain Sunday afternoon.

Local authorities in the region have put up public notices prohibiting outdoor activities.