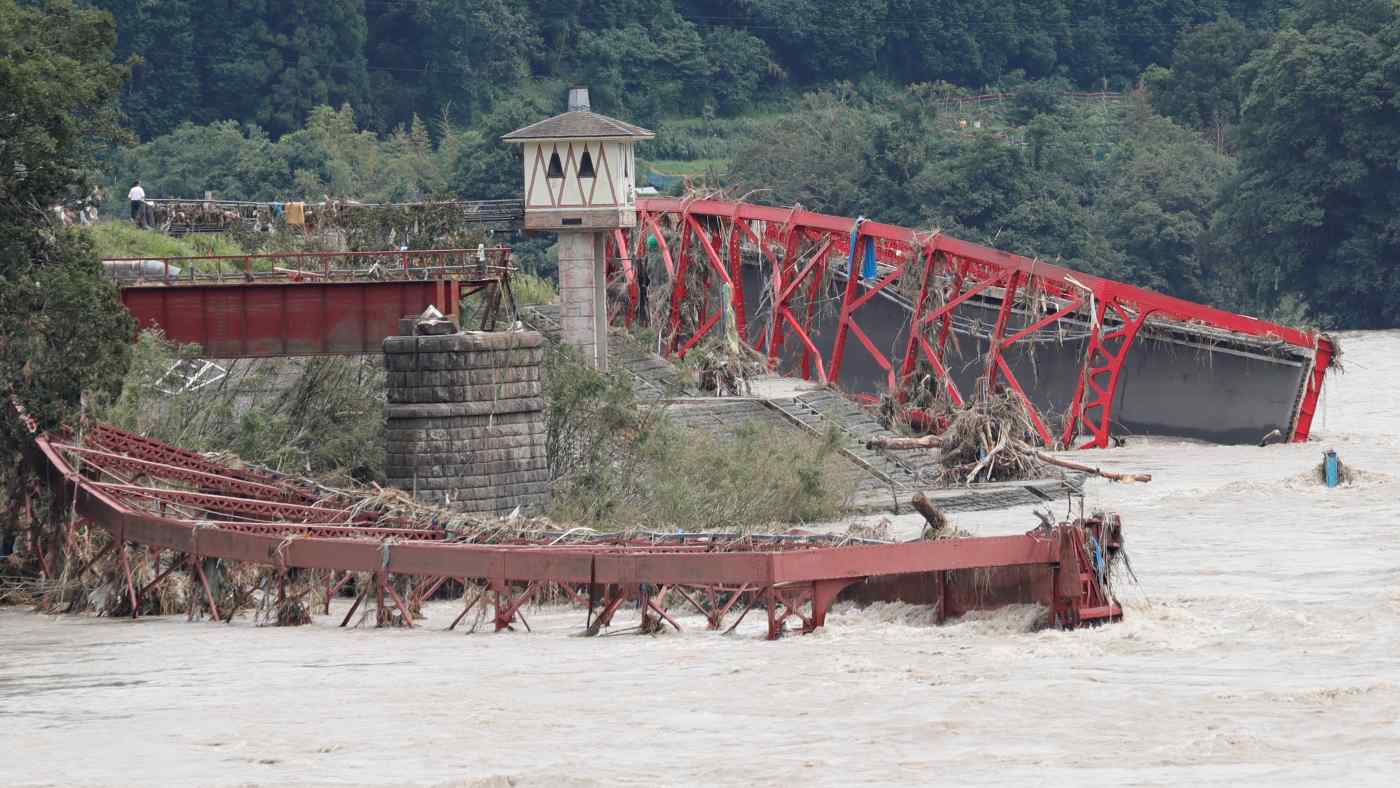 A wahsed out bridge is seen Kumamura, Kumamoto Prefecture: Some parts of the prefecture in southwestern Japan received a month's worth of rainfall overnight on July 3 and 4.   © Reuters
AKANE OKUTSU, Nikkei staff writerJuly 26, 2020 09:30 JST | Japan
CopyCopied

TOKYO -- The risk of deadly downpours has risen Japan in recent years due to global warming, adding to people's worries this summer, on top of the new coronavirus pandemic.

Heavy rains, floods and landslides this month have destroyed more than 1,000 residential buildings, killing at least 78 people across Japan, mostly in the country's southwestern Kumamoto Prefecture.

For the 24 hours through the morning of July 4, the city of Ashikita in northern Kumamoto was hit by torrential rain said to "occur once in 50 or 100 years," according to the National Research Institute for Earth Science and Disaster Resilience, or NIED. Some cities in the region got more than a month's worth of precipitation overnight.

Devastating rainfall and floods have become more common in recent years, highlighting the threat of climate change. Last year, typhoons in October triggered a deluge that would normally occur only once in "over 100 years" in parts of Nagano, Fukushima and Miyagi prefectures, according to NIED.

The island of Kyushu, hit hardest by this year's downpours, was soaked with flooding rains just three years earlier, leaving 42 people dead or missing. In July 2018, there was also widespread flooding in southern Japan. Data from the Japan Meteorological Agency shows downpours are becoming more frequent. For the 10 years from 2010 to 2019, rainfall in excess of 50 mm an hour occurred 327 times a year on average, compared with 226 times between 1976 and 1985, an increase of 40%. Extreme rainfall events with precipitation of more than 400 mm per day -- the level likely to cause landslides or floods -- rose 170% over the same period.

The trend is likely to continue, as "more global warming will lead to increased occurrences of heavy rain," said Fumiaki Fujibe, a professor at Tokyo Metropolitan University. Global warming is widely seen as increasing the frequency of heavy rain because temperatures put more water vapor into the atmosphere. According to the Meteorological Agency, the amount of water vapor over Japan has been rising since at least 1980.

On the other hand, research led by Hiroaki Kawase of the Meteorological Research Institute, the agency's research branch, suggests global warming may not be the direct cause of the torrential rains, despite causing heavier rainfall. His research shows that the precipitation level during Japan's heavy rainfall in July 2018 was 6.5% higher than it would have been absent the temperature rise of the last 40 years, given the same atmospheric pressure and wind patterns.

Japan, of course, is not the only country at risk of flooding. Destructive floods have occurred in Asia almost every year. In 2016, floods in China led to 310 deaths and $14 billion in economic losses, according to the World Meteorological Organization.

In 2017, floods across India, Bangladesh and Nepal killed at least 1,200 people. The organization also warned in July that "unusually heavy monsoon rainfall and flooding is affecting India and neighboring South Asian countries, as well as China and Japan."

The COVID-19 pandemic adds an additional challenge this year. In the case of the Kyushu downpours this month, there was a shortages of capacity at evacuation centers. On top of the difficulty of finding safe places for people to stay, social-distancing requirements limited the amount of available space.

In Kumamoto Prefecture, a staff member who worked at two evacuation sites tested positive for COVID-19. As many as 400 people may have come into contact with the contact with the worker, requiring people to undergo PCR testing and that the sites be disinfected.