The mudslide in Atami cut through the seaside city to the bullet train line and beyond. Photo taken on July 6.   © Kyodo
RIKA KIMURA, Nikkei staff writerJuly 7, 2021 01:57 JST | Japan
CopyCopied

TOKYO -- Days after the deadly mudslide in the coastal Japanese city of Atami, the heaps of debris and soil washed out to sea are proving a major obstacle in the hunt for the missing.

"Be careful -- there's a nail sticking out," says a voice in a video of a Japan Coast Guard member swimming through the debris-filled waters of Izusan Port in a clip tweeted out by the service. The coast guard has dispatched vessels and helicopters to the area for the search effort.

An embankment at Atami's Izusan district collapsed Saturday morning following torrential rains, unleashing an estimated 100,000 cu. meters of mud that washed cars, homes and more down to the port 2 km away. A large gas cylinder, likely carried down from one of the numerous damaged homes, was among the items seen floating at sea. 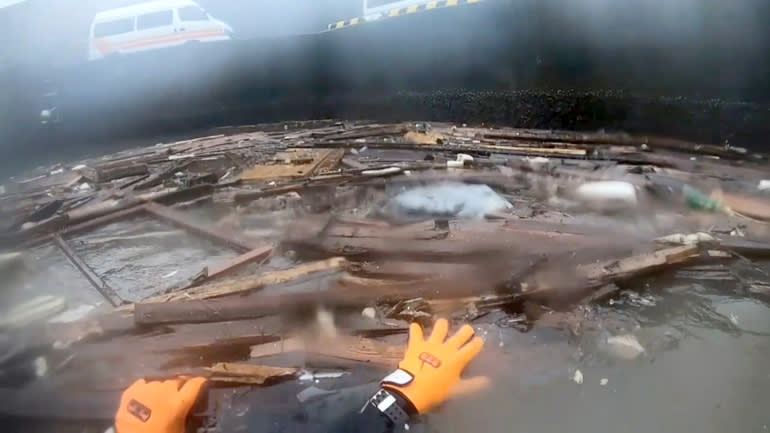 Atami is home to hot springs and is a popular vacation destination in Japan. As of Tuesday, the mudslide had left seven people dead and 27 missing. A total of 122 homes were damaged, Shizuoka Prefecture announced that day.

A fishing vessel found two women floating in Izusan Port around 2 p.m. on Saturday. They were later pronounced dead. Others are also believed to have been swept out to sea.

But debris and mud have clouded the waters, complicating search efforts. "Visibility is low underwater, so it's difficult to conduct diver searches," a coast guard representative said.

Tuesday's efforts by the coast guard focused largely on visual searches from vessels and the coast. Emergency responders are also working to remove debris and dangerous materials from the area.

"The sea usually clears up in a day or two after torrential rains, but the fact that the water is still muddy shows just how serious the damage was," a 73-year-old man who lives by the coast said. "Saving lives is top priority, of course, but I hope we get our beautiful sea back soon."