TOKYO -- Powerful earthquakes that rocked Japan on Wednesday night left scars on transportation systems and supply chains in northeastern areas, raising concerns over a prolonged impact on the economy.

According to rail operator East Japan Railway, or JR East, a bullet train headed from Tokyo to the northeastern city of Sendai on the Tohoku Shinkansen line derailed about 2 km from Shiraishi Zao Station in Miyagi Prefecture. None of the 78 people on board were injured.

JR East has suspended operations between Nasushiobara in Tochigi Prefecture and Morioka in Iwate Prefecture, and has sharply reduced the number of trains running north from Tokyo to Nasushiobara, as well south from Hokkaido's Shin-Hakodate Hokuto to Morioka.

The company said it may take "a considerable amount of time" until operations resume in full, due to the need to restore the derailed train and to thoroughly inspect all affected sections.

Japan Airlines has decided to provide extra flights between Tokyo and the Tohoku area while bullet train service is suspended.

The earthquake also disrupted road traffic. According to highway operator Nexco East Japan, the Tohoku Expressway and Joban Expressway are among the highways that closed on Thursday. Courier service operator Yamato Holdings warned that deliveries to the northeast region may be delayed.

Toyota Motor East Japan, a subsidiary of Toyota Motor, has temporarily suspended factory operations in Miyagi and Iwate prefectures. The company will check the factories to see if it is safe to resume operations Thursday afternoon. The affected factories build the Yaris Cross SUV and the Aqua compact. 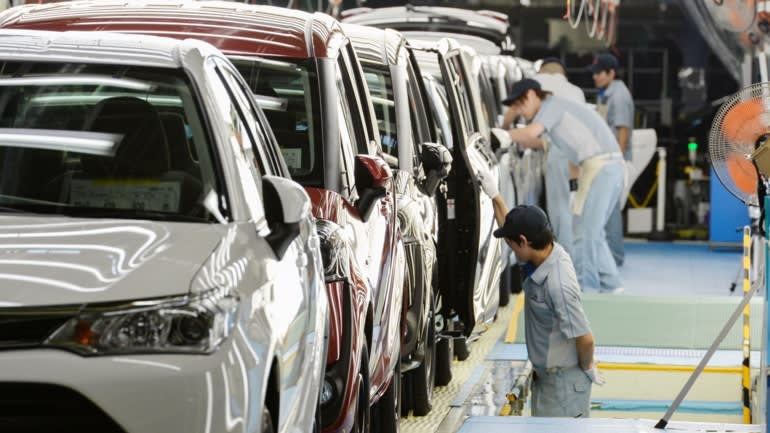 Oil company Eneos stopped operations at its refinery in Sendai after a safety alarm was triggered. Although no fire or explosion occurred, oil leaked from a tank at the site; recovery work is currently underway.

Operations at the Chiba Refinery have also been suspended due to a power outage that occurred within the service area of Tokyo Electric Power Co. (TEPCO). Kawasaki Refinery facilities have also suspended operations.

At around 11:36 p.m. on Wednesday, an earthquake measuring 6-plus on Japan's 7-point seismic intensity scale hit Miyagi and Fukushima prefectures. The epicenter was located off the coast of Fukushima at a depth of about 57 km, with an estimated magnitude of 7.4.

According to the government, four people were killed and at least 107 others were injured. 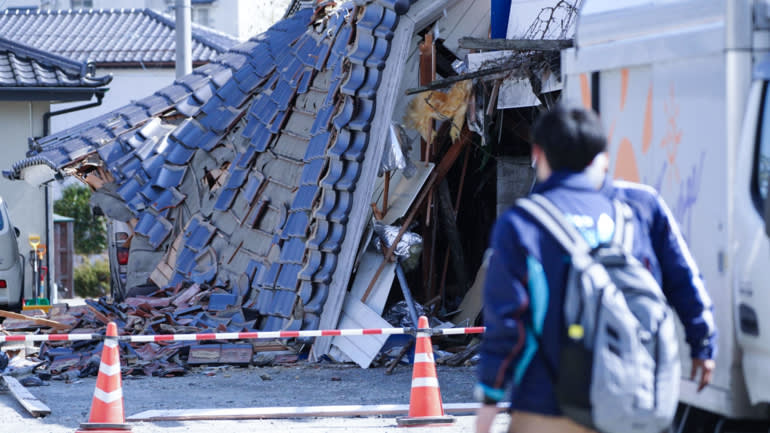 This house in the town of Kunimi, Fukushima Prefecture, collapsed due to the temblor. (Photo by Kai Fujii)

During a budget committee meeting on Thursday morning, Prime Minister Fumio Kishida said the government "will take all possible measures with a high sense of urgency."

According to the Nuclear Regulation Authority, the cooling system for spent nuclear fuel shut down at the Nos. 1 and 3 reactors of the Fukushima Daini plant, which is 12 km south of the Fukushima Daiichi plant crippled by a 9.0 earthquake and ensuing tsunami in March 2011. The system has since been restored.

More than 2 million homes in TEPCO's service area were temporarily without power, though the situation was resolved by the morning. In the area served by Tohoku Electric, approximately 3,300 households were without power as of 10:30 a.m. on Thursday.

The Ministry of Economy, Trade and Industry has announced that 11 thermal power plants, including Tohoku Electric's Haramachi plant in Fukushima, were temporarily shut down due to the earthquake. 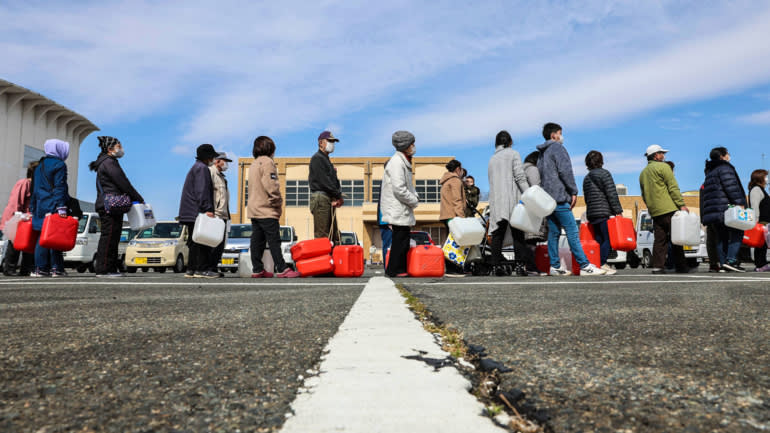 People line up for water in the city of Minamisoma, Fukushima Prefecture, on March 17. (Photo by Hirofumi Yamamoto)

The Wednesday earthquakes hit the Pacific coast of northern Japan, an area similar to the 2011 earthquake and tsunami. Stretching from Iwate prefecture to Hokkaido, the area has been repeatedly hit with massive earthquakes in the past. Even with the latest technology, it is difficult to predict when, where and how large the next one will be.

In December, the government announced new damage estimates for a magnitude-9 level earthquake hitting off the Pacific coast of northeastern and northern Japan. The scenario envisions up to 199,000 people dying across seven prefectures.

The Central Disaster Management Council predicts that most of the fatalities will be caused by tsunamis. Some of these fatalities will be injured people hit by ice-cold water and being exposed to cold temperatures for a prolonged period. The potential economic fallout for the region and country as a whole could be 31.3 trillion yen ($264 billion), the council said.

The area off the east coast of Hokkaido has seen a magnitude-9 level earthquake every 300 to 400 years. The last one struck in the 1600s.

Japan's Earthquake Research Committee predicts the likelihood of an earthquake larger than magnitude 8.8 occurring off the east coast of Hokkaido in the next 30 years to be up to 40%.