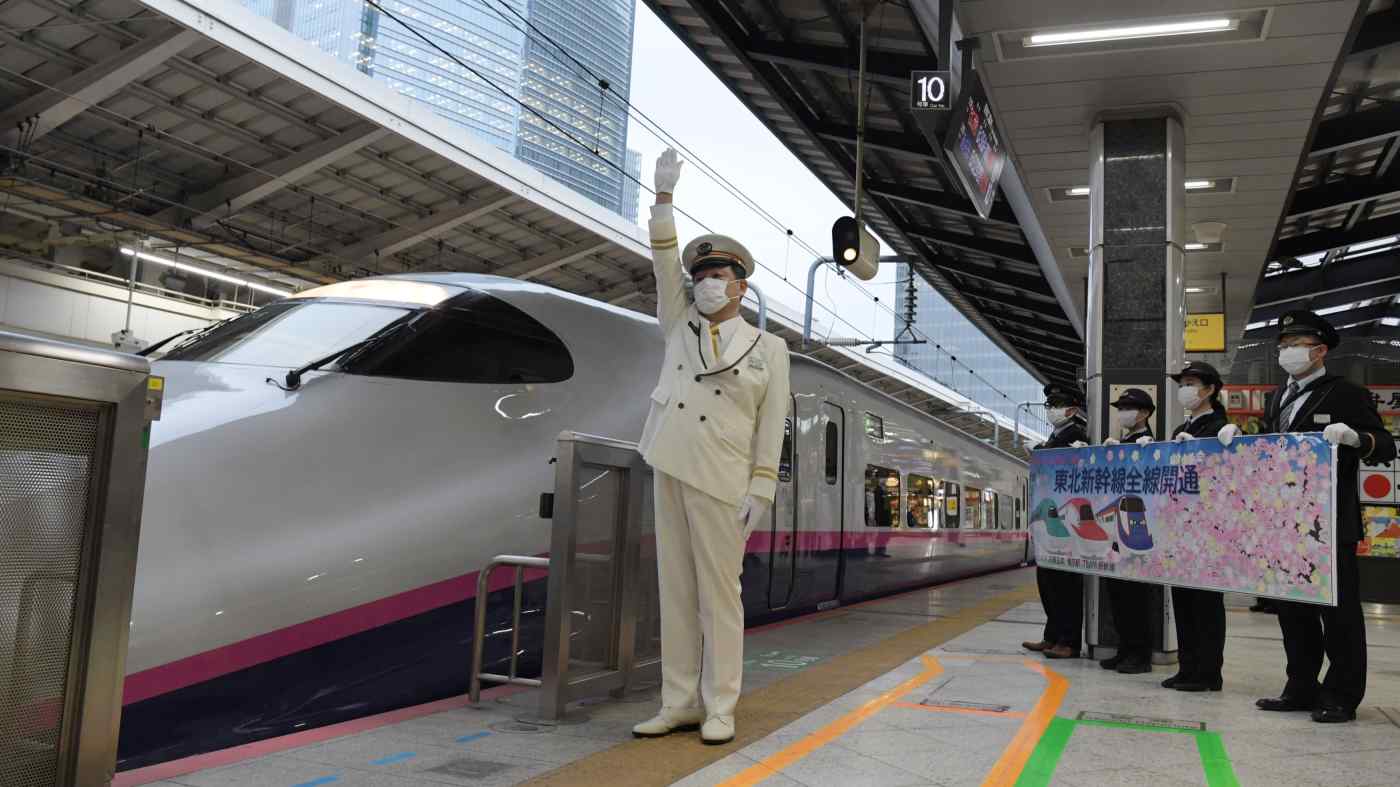 The first bullet train since services were restored across the entire Tohoku Shinkansen line leaves Tokyo Station on April 14, 2022. A 7.4 quake in March had derailed a train.
April 14, 2022 12:16 JST | Japan
CopyCopied

TOKYO (Kyodo) -- The Tohoku Shinkansen, which connects Tokyo and Aomori, the northernmost prefecture of Japan's main island, on Thursday began making full runs for the first time since a powerful earthquake derailed one of its bullet trains nearly a month ago.

The high-speed trains are now back in service between Fukushima and Sendai stations, the last stretch of the line to go unused since the temblor. The resumption also enabled Hokkaido and Akita Shinkansen trains to reach Tokyo.

However, East Japan Railway Co., also known as JR East, the line's operator, said efforts to restore infrastructure are still underway and that its bullet trains will operate at a reduced speed and on temporary timetables for the time being.

The resumption of services on the entire line came earlier than the initially planned date of April 20 because there were no major aftershocks, which expedited the recovery work, the operator said.

The magnitude 7.4 quake on March 16 derailed a Tohoku Shinkansen bullet train in Shiroishi, Miyagi Prefecture, causing suspension of services in areas stretching from Tochigi Prefecture, north of Tokyo, to Iwate Prefecture. JR East has gradually restored its services in the affected areas since then.

The suspension was the longest since the magnitude 9 quake of March 11, 2011, when it had taken about a month and half for the company to resume operations across the entire line.

Sixteen of the train's 17 cars derailed in the incident last month. Six out of the 78 people aboard were injured, marking the first time passengers were hurt in a Shinkansen derailment.

Tohoku Shinkansen trains will run at a reduced speeds of up to 160 kilometers per hour, half their normal maximum speed, between Koriyama Station in Fukushima Prefecture and Ichinoseki Station in Iwate Prefecture, with the number of trains reduced to 80% to 90% of normal operations.

The timetables are expected to return to normal after Golden Week holidays in early May, the company said.