Exodus begins for over 10,000 stranded at Narita airport TOKYO -- Over 13,000 people spent the night at Narita International Airport waiting for more train and bus services to be restored after one of the strongest typhoons in recent years to batter Japan's capital region.

Railway lines connecting the airport with central Tokyo resumed operation on Tuesday morning, helping to clear out the crowds at the city's main international gateway.

The number of stuck travelers rose as high as around 16,900 as of midnight, according to the airport operator.

Water, light meals and sleeping bags were distributed to stranded passengers, who numbered about 13,330 as of 3:20 a.m. on Tuesday. About 240 mobile phone chargers were set up across the airport as well.

Among them was Jennifer, a 25-year-old American who arrived at Narita before 4 p.m. on Monday. She said she spent the night at the airport sitting on the lobby floor and wasn't able to get any sleep.

After her connecting flight to Taiwan was cancelled, airport staff did not provide Jennifer with any information. Right now, she just wanted to head to a Tokyo hotel and take a shower, she said. 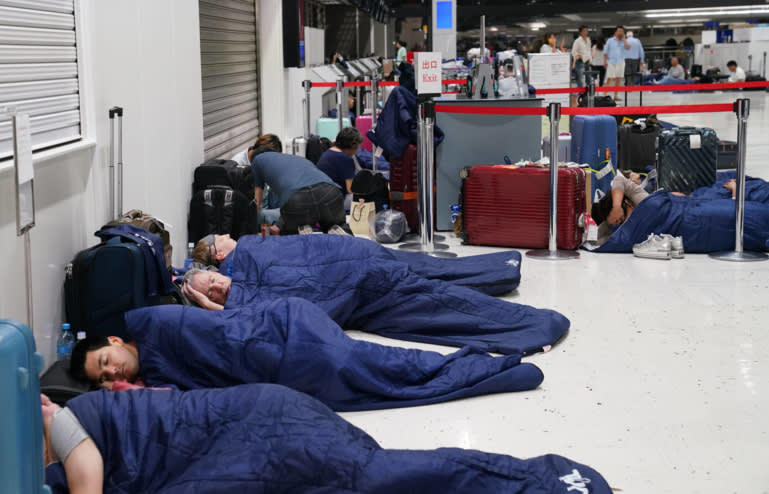 Chris Campbell, a 71-year-old man from Australia, emerged from his sleeping bag at around 7 a.m. "I felt I was going crazy due to insufficient information, the noisy situation, lying on the hard floor and hunger," he said.

Campbell arrived at Narita around 7:30 p.m. on Monday and found that he could not get into any of the terminal restaurants because they were too crowded. The convenience stores, meanwhile, had been stripped bare. He made do with crackers and water provided by the airport.

He said that it took 30 minutes to find an information kiosk with English-speaking staff, and that information on the stalled transportation was rarely updated. The airport did offer information in multilingual announcements, but Campbell said they were "hard to hear and of no use," and only prevented him from sleeping.

About 610,000 homes remained without power as of Tuesday noon, mainly in Chiba Prefecture where Narita is located, according to Tokyo Electric Power Co. Holdings. While the company is working to restore service, some are not expected to get back online until Wednesday.

Narita was cut off from Tokyo on Monday after dangerous conditions forced East Japan Railway and Keisei Electric Railway to halt trains to and from the airport, located 57 km from the city center. Bus service was suspended as well. Stranded passengers weighed their options for continuing their journey on Sept. 9. (Photo by Kei Higuchi)

Transportation began to be restored only in the late afternoon, when the arrival lobby was already packed with returning travelers. Flights continued to arrive past 10 p.m.

A 32-year-old office worker said that when she arrived at Narita at around 2:30 p.m. from a trip to the U.S., the lobby was so crowded she could hardly move. About 100 people were in line for a taxi, she said.

"I can't believe I can't leave the airport," she said. "This is the first time something like this has happened to me."

Tiago Mota, a 30-year-old visiting Japan for the first time from Portugal, said: "We need more staff who speak foreign languages. If they had walked around and listened to our questions, it would have eased our anxiety."

Pointing to the fast-approaching Tokyo Olympics next year, Mota added: "I guess more foreigners will be coming for the Olympics and many of them cannot speak Japanese. I hope things will get better."

Typhoon Faxai disrupted travel throughout Tokyo as well. JR East suspended all non-bullet trains early Monday morning. While the company had planned to resume service around 8 a.m., trains on the heavily traveled Yamanote loop line did not start running until after 10 a.m. The suspension affected 2.78 million people.

The typhoon killed at least three. Over 50 were injured, including in neighboring Chiba and Kanagawa prefectures, and 140 houses were damaged.