India and Pakistan brace for worst locust attack in 27 years

Amid COVID-19, Modi vows to 'salvage our crops' as drones and helicopters readied 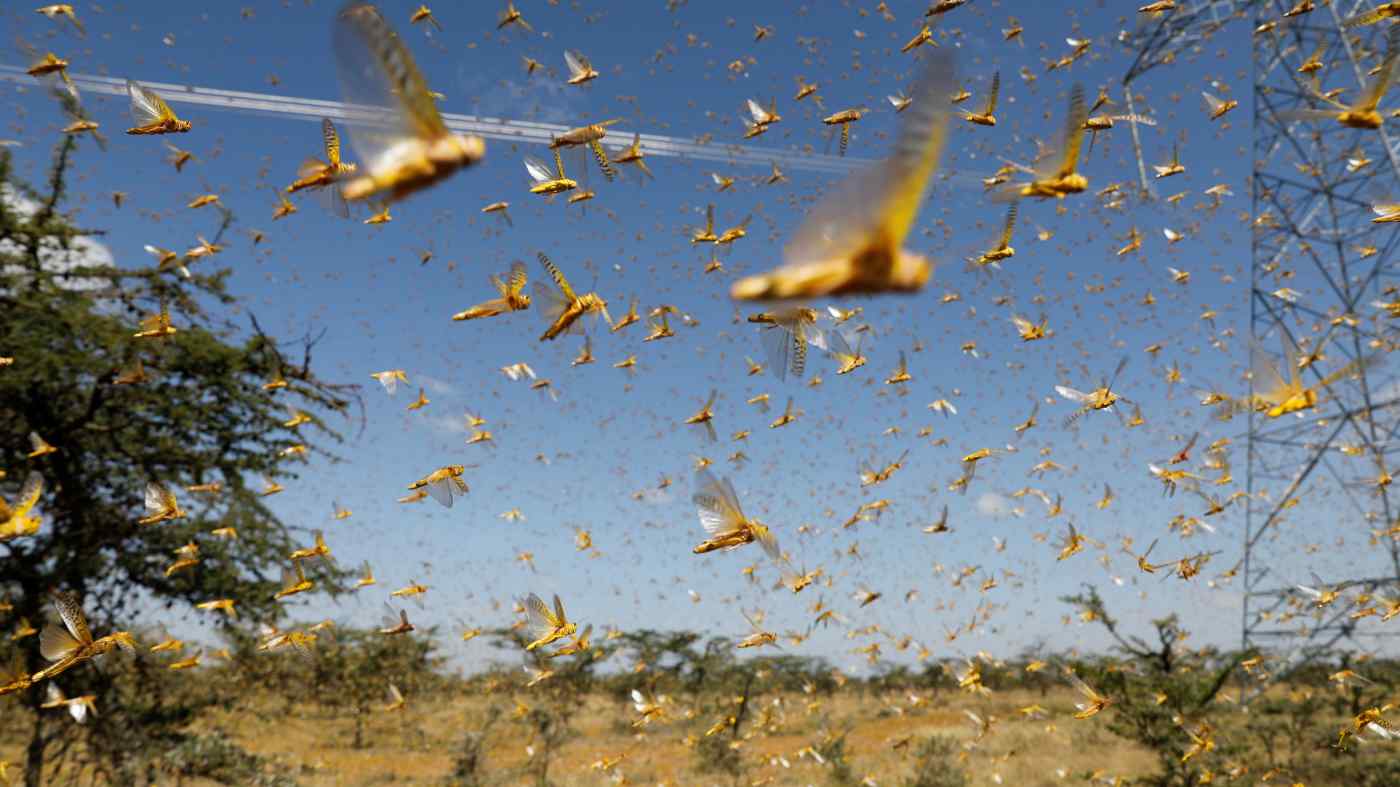 NEW DELHI -- In the midst of the coronavirus pandemic, India and Pakistan are battling another crisis -- their worst locust attack in nearly three decades.

The flying insects have crossed over to India in a wave of desert swarms from neighboring Pakistan, sweeping several parts of the country and threatening to damage crops.

Indian Prime Minister Narendra Modi noted in a Sunday radio address that many parts of the country have been affected by locust attacks, adding that efforts are on to help farmers and reduce crop losses by using modern techniques to tackle the crisis. "I am sure that together not only will we be able to battle out this crisis that is looming on our agricultural sector, but also manage to salvage our crops," Modi said.

Among Indian states affected by the desert locusts, one of about a dozen species of short-horned grasshoppers, are northwestern Rajasthan, northern Punjab, western Gujarat and central Madhya Pradesh. Several other states as well as the territory that includes the national capital have also sounded the alarm over a potential attack in their regions.

In Pakistan, the desert locusts have reportedly entered from Iran, and have already devoured considerable quantities of crops in over 60 districts in all provinces, including Balochistan in the southwest. Media also say the country is intensifying efforts to combat the plague with pest control systems including spray aircraft.

The local government in the Indian capital region where New Delhi is located has directed authorities to take preventive measures to control and eradicate the locusts to avoid the "devastating effect on standing agricultural and horticultural crops, vegetation, plants, gardens, orchards" and other potential targets of the insects. It is considering measures including creating awareness among the public and farmers about the attack and spraying insecticide and pesticide on crops.

In India's worst-hit areas, people have also resorted to tactics such as banging utensils and playing loud music to scare away the pests.

India experienced its worst locust attack in 1993 when it witnessed 172 swarm incursions. According to a 2014 document issued by the Food and Agriculture Organization of the United Nations, "technical assistance and capacity building were provided to India and Pakistan [in 1993] that successfully prevented swarms from migrating to other regions." India treated 311,199 hectares (3,112 sq. kilometers) of area by air and ground operations and Pakistan treated a total of 316,979 hectares, it said.

Locusts are an omnivorous and migratory insect that can fly hundreds of kilometers in swarms and easily cross national boundaries. Apart from Africa and Asia, it is also found in the Middle East, and inhabits some 60 countries. A swarm one sq. kilometer in size contains about 40 million locusts, which eat the same amount of food in one day as about 35,000 people, according to the FAO.

The attack is a double blow for India as it comes amid the spread of the coronavirus. Confirmed cases as of Monday climbed to 190,535 with 5,394 deaths.

In a statement, the government said it is set to procure 60 insecticide sprayers from Britain. It added, "drones will be used to spray pesticides on tall trees and inaccessible places for effective control of locusts, while plans are afoot to deploy helicopters for aerial spray."

"This type of locust attack is usually seen in sub-Saharan Africa, in particular eastern African countries such as Kenya and Ethiopia," Sandip Das, an agriculture and food security expert, told the Nikkei Asian Review. Das said that this year's attack is "much more" intense than one last year.

Das added, however, that most of the wheat harvest in India is complete, with fields now being prepared for rice planting once the monsoon rains start this month. "So, there won't be extensive damage to big crops, though fruits and vegetables" could be affected by the attack, he said.

Usually the locust swarms enter India through Pakistan for summer breeding in June or July with the advent of the monsoon. But this year, Indian officials say, the pink swarms started much earlier in April because of presence of a residual population in Pakistan that couldn't be controlled last season.

Pink immature adults fly high and cover long distances during daytime hours before settling on trees at night. They are very active and their mobility makes it difficult to control individual swarms.