Floods, earthquakes and even nuclear meltdown have tempered troops' morale 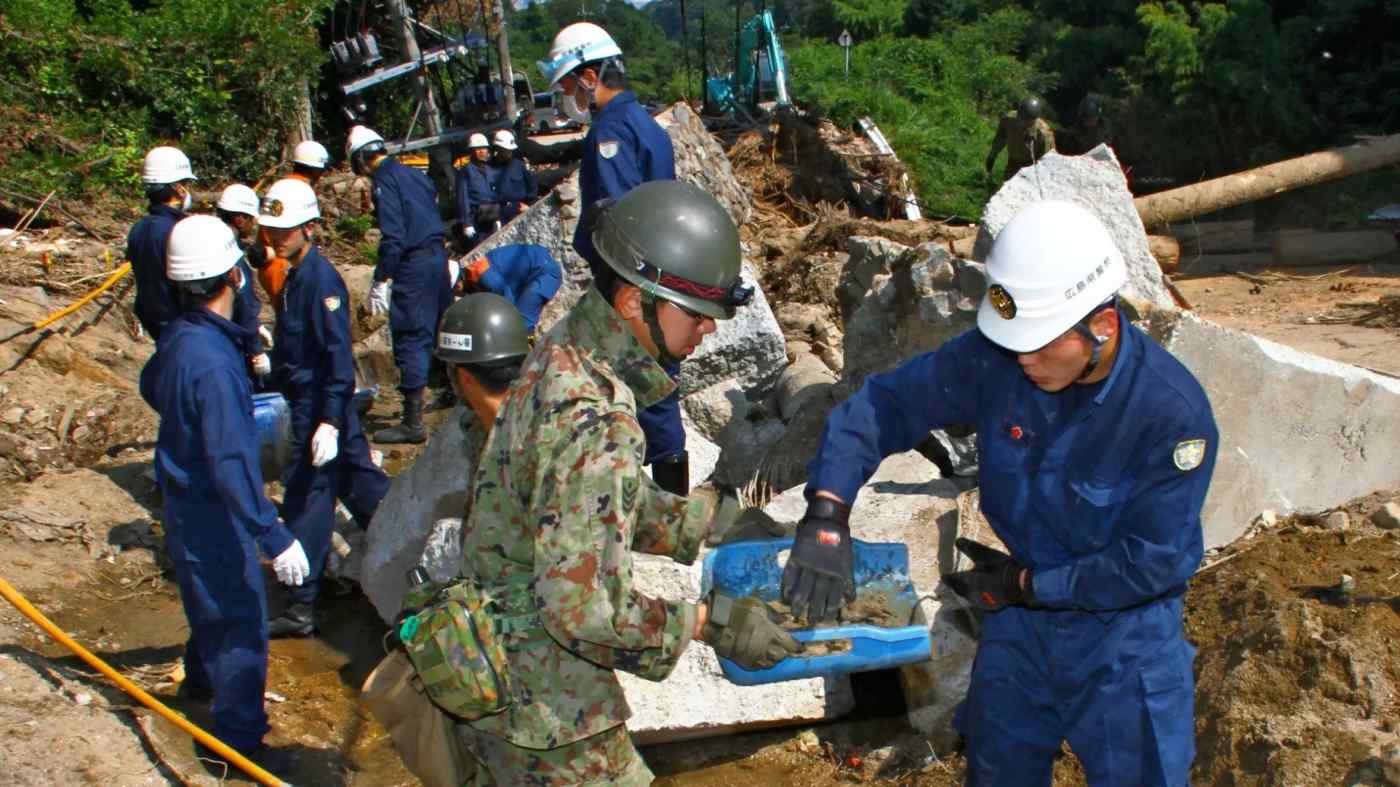 "Every one of us is driven by the thought that we are doing it for disaster victims and our people," a GSDF major says. (Courtesy Japanese Ground Self-Defense Force)
MASAYA KATO, Nikkei staff writerJuly 28, 2019 04:06 JST | Japan
CopyCopied

TOKYO -- Japan is regularly pummeled by typhoons, deluged with floods and rattled by earthquakes. And after every big disaster, Self-Defense Force troops rush in to do search, rescue and recovery work.

The SDF was formed after World War II, and its service members have never fought in a combat zone, which is prohibited under Japan's pacifist constitution. But disaster-recovery operations demand professional expertise as well as physical and mental toughness from Japan’s soldiers.

On the night of July 6, 2018, members of the 13th Brigade of the Ground Self-Defense Force were growing anxious while on a training mission in northern Japan. The brigade is based at Camp Kaitaichi, in the western prefecture of Hiroshima. The region was being hit by torrential rain that would lead to over 200 deaths.

TV and radio reports came in one after the other, each graver than the last. Troops began receiving worrying messages from friends and family back home. They began to insist to their superiors that they return to Hiroshima to help. When the extent of damage became clear the next day, the brigade was ordered back to Camp Kaitaichi. Naoto Harada is a veteran of the SDF's rescue operations.

Naoto Harada, 52, a sergeant major who was then serving in the 13th Brigade, joined a search and rescue operation in the Yanohigashi district of the prefectural capital of Hiroshima, where three people had gone missing.

Temperatures climbed above 35 C every day. Harada and Kenji Morita, 35, a major who was leading a company at the time, worried about their charges' health and morale. Service members usually take a break every 60 minutes to maintain their strength, but the heat was so intense Harada and Morita told them to alternate 10-minute searches with 10-minute breaks.

On July 16, the brigade found a body, then another the following day. The third body, if the person they were searching for was indeed dead, should be in the same vicinity, Morita told the troops, based on information from police and firefighters.

Morita later admitted he harbored doubts about this possibility, but said he tried not to show it. Morale could quickly deteriorate if the commander was seen as uncertain.

Searches for missing people can expose personnel to the brutal -- and graphic -- reality of death. And service members themselves risk ending up as victims in these danger zones. The mental stress can force some members to leave the mission.

Harada tried to talk to members whenever he found anyone looking stressed. One soldier, unable to conceal his depression, said that he was shocked by the experience.

Harada tried to encourage him. "I know it's hard to face death," he said. "But the only thing you can do is accept it. We can’t just stand here. We have the next person to send home to their family." 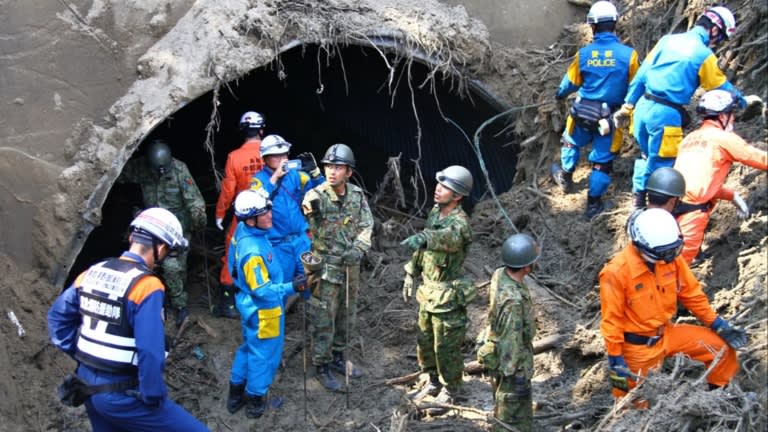 Many SDF members who have served as commanders in disaster missions say it is important to take note of service members' speech and facial expressions, which cannot hide stress, then talk to these troops.

Harada, who enlisted at 18, said he always tried to impress upon his subordinates that he takes his duties very seriously. He is a veteran of the rescue operations that took place after the January 1995 earthquake that devastated the Hanshin region in western Japan, and the March 2011 earthquake, tsunami and nuclear meltdown that hit Fukushima Prefecture and eastern Japan.

"I want to lead the young members by example," Harada said.

The brigade found the body of the remaining missing person on July 28, more than three weeks after the torrential rain. It was found far from where police and firefighters expected it to be. Morita said the victim's family members appeared sad but also relieved when they showed up to receive the body. 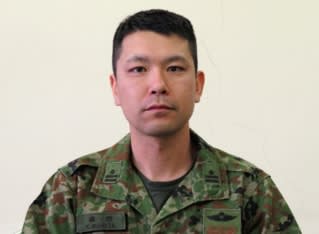 "There are heartbreaking moments," Morita said, "but in the end, every one of us is driven by the thought that we’re working for disaster victims and our people."

SDF personnel are appreciated in Japan for the prominent roles they played in many post-disaster recovery missions, particularly that after the 2011 calamity.

From March to December that year there were 10 million troop dispatches, meaning an average of 30,000 SDF members were dispatched to the disaster-hit region every day.

More than 18,000 people died or went missing in the disaster.

A few days after March 11, Michael Mullen, then-chairman of the Joint Chiefs of Staff, the top leader of the U.S. armed forces, called an SDF executive and urged the SDF to take action regarding the Fukushima Daiichi nuclear power plant, even if it meant putting service members at risk.

"We knew what we had to do without someone else telling us," he said, "but we couldn't do what we wanted without getting authorization because containing nuclear disasters was not part of the SDF's mandate."

A disaster management plan held by the Ministry of Defense at the time described the role of the SDF only as "giving evacuation guidance to local residents and performing radiation decontamination."

When the damaged nuclear plant's cooling water evaporated to dangerously low levels, the prime minister's office finally turned to the SDF for help.

The mission was to drop water from helicopters onto the reactor, which had lost its cooling function after the tsunami knocked out emergency generators. 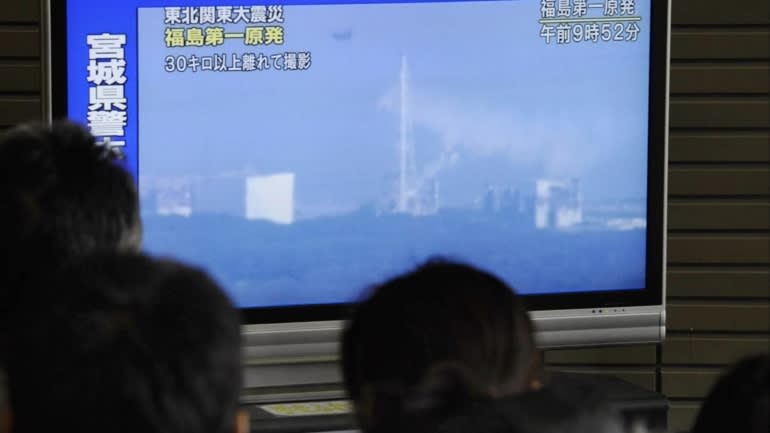 At 9:48 a.m. on March 17, the first of the Ground Self-Defense Force's CH-47 helicopters carrying seawater in giant buckets arrived above Unit 3, dropping its entire load of about 7,500 liters of seawater. The mission was a success despite there being no detailed plan and no rehearsals.

The mission was originally scheduled for the previous day but had to be postponed due to dangerous levels of radiation in the air above the reactor.

When they made their drops, none of the SDF personnel knew what state the reactor was in, meaning they had to risk a possible surge in airborne radiation levels or a critical situation developing below them. Rika Nishikori joined the SDF after seeing its role in the rescue operations after the 2011 earthquake and tsunami.

"We just had to ask the troops risk their lives because the incident was developing right in front of our eyes," Kawano said. "We could have responded more quickly if we had worked out specific response procedures in advance."

Making use of SDF personnel to contain nuclear accidents had never been seriously considered. Japan always had faith that its nuclear plants were safe. But after the meltdowns, SDF troops followed orders, putting their lives on the line.

When joining the SDF, recruits must sign an oath, promising to brave danger and faithfully execute their duties. Disobeying or refusing orders can result in punishment.

No one refused to participate in the helicopter mission, despite the obvious risk. Kawano said he was proud to see SDF members "firmly aware that their duty is to do whatever they are ordered to do."

Rika Nishikori, a 26-year-old sergeant in a GSDF logistics support unit, was a high school senior when she saw news reports of female personnel playing significant roles in the SDF's 2011 disaster recovery operations. Following last summer's floods in western Japan, she served in a unit operating a makeshift public bath for victims. Visitor after visitor bowed and thanked her.

She felt a lump in her throat, and that gave her renewed resolve. "Like, 'I've got to work harder for these people!'" she said.

The gratitude from disaster victims touched her more deeply than words from her superiors ever could.