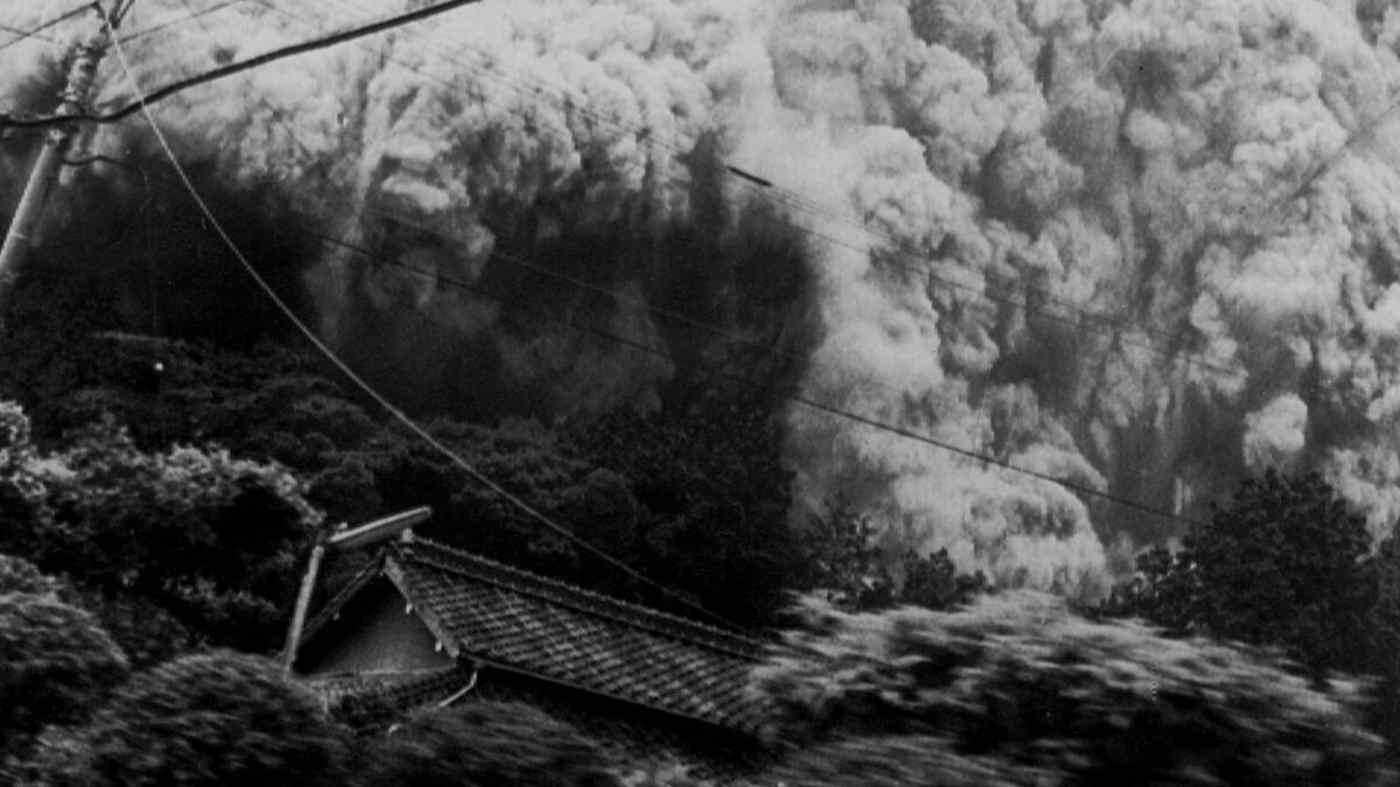 A pyroclastic flow set off by the 1991 eruption of Mount Unzen envelops a house near the Mizunashi River in Shimabara, Nagasaki Prefecture.
MASAKI HORIKOSHI, Nikkei staff writerJune 6, 2021 10:01 JST | Japan
CopyCopied

TOKYO -- One could safely call the whole of Japan a geological hot spot. It is home to 7% of the world's active volcanoes despite comprising just 0.25% of its total landmass.

Experts are warning that the country is ill-prepared for a major eruption. Many active volcanoes in Japan are located close to residential areas, posing huge risks to people's lives and livelihoods.

This year marks the 30th anniversary of the eruption of Mount Unzen's Fugen Peak in Nagasaki Prefecture in 1991. When Mount Unzen blew its top, it triggered a massive pyroclastic flow -- fast-moving, superheated clouds of ash and gases -- that killed more than 40 people. It was the first major volcanic disaster in postwar Japan.

But the long-running problem of poor policy coordination among government organizations charged with preparing for the next big eruption remains unresolved. And as many older experts retire, there is growing concern about a shortage of people capable of meeting this public safety challenge. The government's slow response to the COVID-19 pandemic should serve as a cautionary tale, highlighting the dangers neglecting long-term public safety challenges.

At the end of May, more than 2,000 residents took part in a large-scale disaster drill conducted jointly by the cities of Shimabara and Minamishimabara, located at the foot of Fugen Peak.

During the June 1991 eruption, the toxic flow of solidified lava, ash and hot gases killed 43 people including a Nikkei photographer. At the moment Fugen Peak is quiet, but experts say the huge lava dome near the summit, a steep-sided mound formed by the lava spewed by the volcano, could collapse. Japan has more than 100 active volcanoes. An even deadlier eruption than the one on Mount Unzen occurred in 2014 on Mount Ontake in central Japan. That event left 63 people, mainly climbers, dead or missing and was the worst volcanic disaster in Japan since the end of World War II.

In 2019, heightened volcanic activity in Hakone, a popular hot spring resort near Tokyo, led to entry restrictions. And fabled Mount Fuji -- Japan's highest peak, UNESCO World Heritage site and geographic symbol of the nation -- is also an active volcano. Some volcanologists say it could erupt at any time.

But the government has been alarmingly slow to respond to safety risks posed by these volcanos, according to experts. There is no single agency in Japan dedicated to dealing with volcanic disasters.

Public research institutes and universities are engaged in research vital for monitoring volcanic activity and disaster prevention, but they operate independently and lack effective coordination. Human resources and expertise are dispersed.

Government organizations that study volcanoes are scattered among seven ministries, agencies and public corporations. Meetings to discuss disaster prevention typically involve little more than briefing on what the various bodies are doing.

Since 2019, the government has operated a system designed to enable government organizations and universities to share research and monitoring information. But progress has been elusive. Because universities pay out of pocket to install and maintain monitoring equipment, they tend to focus on their own research, showing little interest in working with others. The system is designed to bring together 14 institutions and universities to share information, but only 10 have participated so far. Some institutions have a policy of not publishing their data.

Yuichi Morita, a former professor at the University of Tokyo's Earthquake Research Institute and currently a senior researcher at the National Research Institute for Earth Science and Disaster Resilience, says the problem stems from the lack of an organization to coordinate research and monitoring by various institutions.

Before Mount Ontake suddenly erupted on Sept. 27, 2014, the Japan Meteorological Agency failed to issue an alert despite warning signs. The agency kept its Volcanic Alert Level for the mountain at Level 1 on its five-point scale. An investigative panel set up by the government found insufficient communication among relevant organizations because there was no established method for sharing information about volcanic earthquakes and other telltale signs. The panel called for the creation of an integrated system to comprehensively evaluate eruption risks and take steps to prevent disasters.

Many volcanic countries have national institutions that conduct integrated studies and monitoring of volcanos in normal times, and respond to emergencies. The United States Geological Survey, Italy's National Institute of Geophysics and Volcanology and Indonesia's Center for Volcanology and Geological Hazard Mitigation serve as command centers for efforts to minimize social and economic disruption from volcanic activity and eruptions.

An even more serious problem for Japan is the dwindling ranks of experts in volcanology. Predicting eruptions requires a pool of researchers who are well-versed in the characteristics of the volcano in question, and can work with local governments to set up fixed observation points.

As of 2019, Japan had only 109 experts in predicting volcanic eruptions, less than one for every active volcano in the country, according to the science ministry.

With some seasoned researchers set to retire, the shortage of trained people will become even more serious in the coming years, undermining Japan's ability to predict volcanic eruptions and mitigate their impact.

Because Japan's volcanoes have been quiescent in recent years, research funding has stagnated. Few universities have the financial wherewithal to employ volcanologists. The question is whether they will be on hand the next time one of the country's volcanos rumbles to life.