Workers tend to a train that derailed after sediment covered tracks on the Geibi line in Japan's Hiroshima Prefecture in 2020. (Photo courtesy of the Japan Transport Safety Board)   © Kyodo
NAOKI ASANUMA and SHOJI YANO, Nikkei staff writersJuly 17, 2021 13:37 JST | Japan
CopyCopied

TOKYO -- When the mudslide triggered by torrential rain came crashing down the hillside in Japan's coastal city of Atami this month, it made what witnesses described as a "horrible sound."

The river of earth and debris, which left at least 10 dead and 17 missing as of Tuesday, came perilously close to taking out the railway used for by the Tokaido shinkansen, the bullet train line that links Tokyo and Osaka, running under an elevated tracks. Those tracks also serve the Tokaido main line for conventional trains linking Tokyo with Kobe.

The close call underscored the need for Japan to disaster-proof its sprawling rail network, which will be costly as more than 1,900 km of railway in Japan run through areas designated by the government as risk areas for mudslides, Nikkei has found.

Experts have warned the affected area in Atami was at risk for mudslides. The home prefecture of Shizuoka designated the stretch of land as a sediment disaster prone area in 2012.

To evaluate the extent that railway companies are exposed to mudslides, Nikkei partnered with the Tokyo-based Nikken Sekkei Research Institute to compare rail maps with danger zones. The railway data, provided by the Ministry of Land, Infrastructure, Transport and Tourism, is current as of 2019 and stretches nearly 28,000 km. The legally designated sediment disaster prone areas are current as of 2020.

The results show that over 1,900 km of rail lines fall within a danger zone.

The lines operated by West Japan Railway tops the list with 529 km of track at risk of mudslides. East Japan Railway comes in next at 417 km while Kyushu Railway is third at 212 km.

Among just the seven shinkansen lines, a total of 113 km of track fall within the disaster-prone areas. 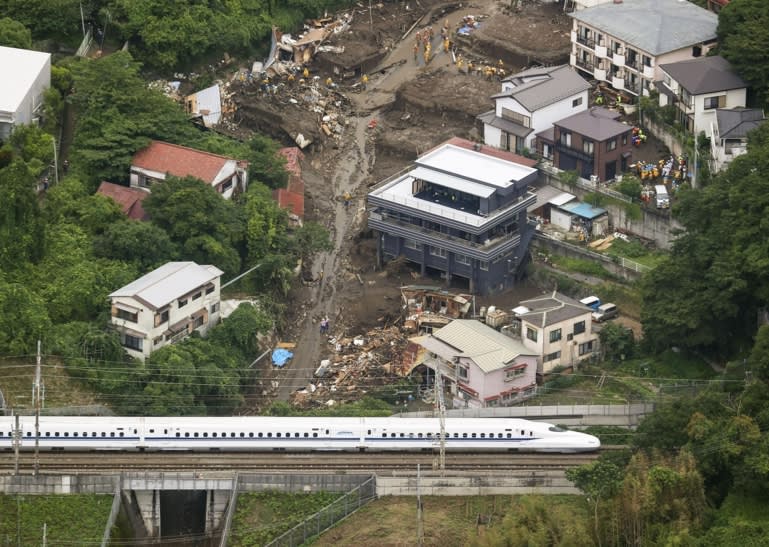 Debris from the landslide in Atami, Japan came perilously close to a bullet train line serving the city.   © Kyodo

Keikyu, the commuter rail operator based in Yokohama, has 13 km of train tracks at risk to mudslides within the 88 km network. That exposure was made woefully apparent in 2012 when a mudslide in Yokosuka caused a train to derail. A total of 56 people onboard were injured in the accident.

After the incident, Keikyu built tunnels and protective barriers at the disaster area as well as in other locations with similar topography. The barriers came with mudslide detectors to warn conductors beforehand. These preventive measures cost roughly 3 billion yen ($27 million) over nine years.

Keikyu has contracted with a meteorological data company to roll out a system that automatically monitors mudslide risk. For privately owned land in problem areas, the company is in discussions with owners over implementing solutions.

For West Japan Railway, also known as JR West, at-risk areas make up 11% of the company's total network, which spans 4,900 km. Routes to Hiroshima, Kyoto and Kobe are especially exposed.

JR West is spending roughly 10 billion yen between fiscal years 2018 and 2022 on slope disaster prevention on the portion connecting Nishi-Akashi Station and Yasu Station. Improved drainage functions can cut time lost to service suspensions and speed restrictions due to heavy rain by about 85%, according to JR West.

"It took almost a week to get the full picture," said a JR West representative.

On the Geibi Line, which serves Hiroshima, derailments occurred in 2016 and 2020 due to sediment inflows onto tracks. The number of passengers using the line has been on a constant decline, pushing JR West to ask local governments last month to discuss what to do with portions of the link.

"Repeat disasters and recoveries do not make socioeconomic sense," JR West said in a news release.

In terms of the share of rail tracks exposed to mudslide risk, small local operators have topped the list. Nagasaki Prefecture's Matsuura Railway stands head and shoulders above the rest at 37%. For comparison, Akita Nairiku Jukan Tetsudo Railway, headquartered in Akita Prefecture, comes at a distant second at 18%.

"We weave our way through mountains and valleys, and there are places where the ground is weak due to things like abandoned coal mines," said Matsuura Railway President Haruki Imazato. "Small landslides are occurring frequently, and the disaster response is weighing quite heavily on our company finances." 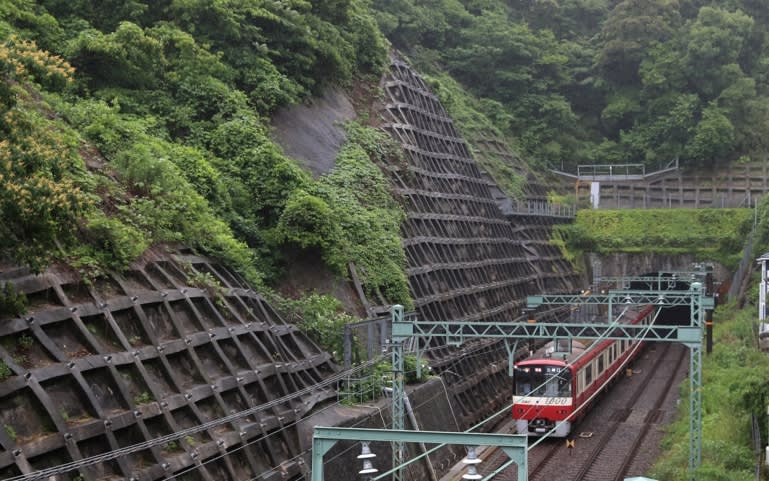 A Keikyu train passes barriers in the city of Yokosuka installed to prevent landslides. (Photo by Rie Ishii)

Hisatsu Orange Railway, which operates a line that runs along the Kyushu coast facing the East China Sea, has 16% of its tracks operating through mudslide danger zones. During the heavy rains last summer, 92 locations sustained damages. Twenty-two of those places were covered in sediment.

A landslide at Ashikita, a town in Kumamoto Prefecture, blocked a train tunnel entrance along with 250 meters of train track. The disaster caused service for portions of the line to be suspended for about four months.

Restoration efforts are still ongoing, and total costs are projected at 700 million yen. Financial assistance from the national and prefectural governments will cover a large part of the expenses. Yet Hisatsu Orange Railway recorded a net losses for three consecutive financial years through March, with the pandemic depressing passenger volume.

Railway companies suffered 230 billion yen in damages from natural disasters between the 2008 and 2019 fiscal years, according to the transport ministry. Heavy rain and mudslides accounted for roughly 100 billion yen. Damages have topped 10 billion yen each year since fiscal 2016.

During the late 1960s, the number of disasters suffered by the now-defunct Japan National Railways topped 8,000 cases, according to the Tokyo-based Railway Technical Research Institute. Thanks to preventive measures, the number of cases subsided to a few hundred per year among the six Japan Railway operators since the 1990s.

But the number of incidents have once again tracked an upward trend in recent years due to the frequency of heavy rains, a phenomenon believed to be linked to global warming.

It will take up to 195 trillion yen to maintain and upgrade public infrastructure, including roads and levees, over three decades starting in fiscal 2019, according to the transport ministry. Some of the infrastructure will inevitably be scrapped due to slow growth and shrinking populations.

"Japan built a public transport network with the shinkansen at the peak, but maintaining railway in outlying areas has become challenging," said Kenji Doi, a professor of engineering and architecture at Osaka University. "Based on the intensity of the disasters, we should engage in a [partial] transition to buses and rebuild the transport network."