TOKYO (Kyodo) -- An earthquake with a preliminary magnitude of 5.9 jolted the Tokyo region late Thursday injuring nearly 20 people, with commuters left stranded and water supplies cut in some areas.

The quake occurred at 10:41 p.m., logging upper 5 on the Japanese seismic intensity scale of 7 in parts of Tokyo and Saitama Prefecture, with the focus of the quake in northwestern Chiba Prefecture at a depth of about 75 kilometers, the Japan Meteorological Agency said.

The last time a quake measuring upper 5 or more was registered in Tokyo's 23 wards was on March 11, 2011, when a magnitude-9.0 quake devastated northeastern Japan and triggered a tsunami, the agency said.

The agency initially said the magnitude of the quake was 6.1 but revised it down early Friday.

The agency warned that a quake of a similar intensity could occur within the week, with an official saying there was a 10 to 20 percent chance based on previous temblors. 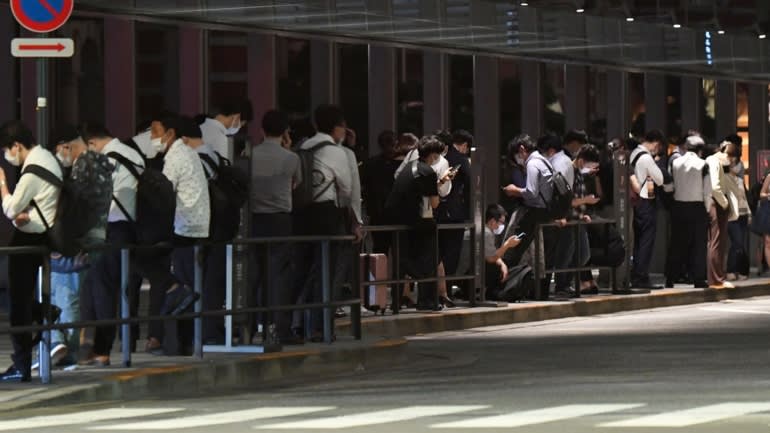 Prime Minister Fumio Kishida, whose government immediately set up a task force to respond to the quake, entered his office at around 11:20 p.m. He told reporters he had ordered officials to help quake victims and prevent further damage.

Nearly 20 people were injured, including a female passenger who fell and hit her head when a train came to a sudden halt, according to police and firefighters.

There were many reports of burst pipes and water supply cuts in Tokyo, officials said.

Japan's top spokesman, Chief Cabinet Secretary Hirokazu Matsuno, said at a press conference that there were no abnormalities reported at nuclear facilities.

The quake triggered a blackout affecting about 250 households in the Japanese capital around 11 p.m. but power was eventually restored.

There were also no reports of damage at Narita airport, east of Tokyo, while transport authorities said runways at Tokyo's Haneda airport had been reopened after checks.