TOKYO -- A powerful typhoon approaching Japan is forcing rail and airline operators to suspend services and has canceled Rugby World Cup matches scheduled for the weekend.

East Japan Railway, or JR East, announced on Friday that it will begin stopping train service in the Tokyo area on Saturday at 10 a.m., with all trains halted by 1 p.m.

Other major rail operators in Tokyo -- like Tokyu, Odakyu and Keio railways -- are expected to announce today scheduled stoppages over the weekend, with most public rail transportation in the metropolitan area likely to be affected by the storm.

Central Japan Railway, or JR Tokai, will halt its Tokaido shinkansen between Tokyo and Nagoya on Saturday. It will also limit the Nagoya and Shin Osaka shinkansen to six trains on Saturday morning, with all service along the route halted by early evening.

When a powerful typhoon tore through Tokyo in early September, some railways experienced significant delays in resuming service. The much larger Typhoon Hagibis is expected to be the biggest storm to ever hit Tokyo and could cause more disruptions. 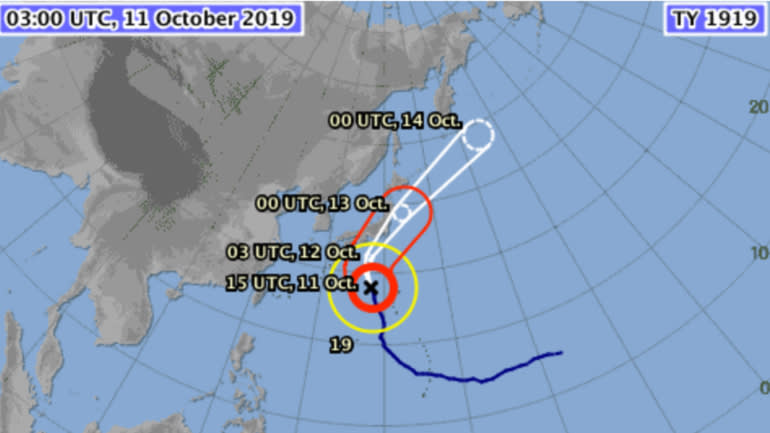 "Based on our past lessons, we will make preparations to avoid confusion," JR East President Yuji Fukasawa said. "We will aim for a flexible response."

All Nippon Airways decided Thursday to ground every domestic flight scheduled to depart Saturday from the Tokyo area's Haneda and Narita airports. Japan Airlines will cancel most afternoon domestic flights from the same airports that day.

The organizers will decide by Sunday morning whether to hold four matches scheduled for that day, including the game between Japan and Scotland. If that game is canceled, each team will earn 2 points, allowing Japan to progress to the quarterfinals.

There are already concerns that the 2020 Tokyo Olympics could face similar typhoon disruptions.

"We'll need to once again run simulations to plan a response in case of a direct typhoon hit," said a high-ranking member of the Tokyo Olympic organizing committee.

September's typhoon, Faxai, caused power outages for up to 930,000 households in and around Chiba Prefecture as utility poles fell and wires were severed by falling trees. Tokyo Electric Power Co. Holdings came under fire as it took more than two weeks to fully restore service.

This time, Tepco aims to ascertain the scope of the damage faster and deploy more workers to affected areas.

Chiba Prefecture looks to send personnel armed with satellite phones to all its municipalities. They will report on the damage and what type of relief is required. Last month, a lack of communication prevented prefectural officials from visiting impacted areas for three days after the typhoon passed.

In the Chiba city of Minamiboso, which suffered a power outage due to Faxai, the water purification plant's emergency generator broke down after two days, leaving 6,800 households without water for 11 days.

A giant power generator ordered from a leasing company is due to arrive in Minamiboso on Friday.

"We will use the leased equipment for a while, then purchase a new off-grid power generator in the 2020 fiscal year," a city water official said.