Almost 170,000 households mostly in Chiba Prefecture, next to the capital, remained without power Friday night after Typhoon Faxai battered the region Monday with winds of up to 216 kph.

Spending needed to strengthen Japanese infrastructure against natural disasters will cost up to 195 trillion yen ($1.8 trillion) over the next 30 years, according to government estimates -- no small amount in a country where public debt already tops 1,000 trillion yen.

Power was initially expected to be fully restored by Wednesday as the region sweltered in temperatures over 32 C. Now, the schedule has been pushed back by two weeks, Tepco Power Grid, a unit of Tokyo Electric Power Co. Holdings, said Friday, adding that it had underestimated the recovery time based on past experience.

The grid operator blamed the difficulty of coping with fallen trees in the mountainous terrain of southern Chiba, which juts out into the Pacific Ocean, exposing it to the brunt of the storm's winds. But restoring power after typhoons has been taking longer in recent years, reflecting more widespread damage. Beads of sweat form on a boy's brow as he fills up on water. The typhoon also knocked out water supplies to many residents of Kimitsu, south of Tokyo. (Photo by Masayuki Terazawa)

When a typhoon struck greater Osaka last year, it took 17 days before all customers had electricity restored.

Aging transmission infrastructure is partly to blame. Much of the transmission towers in use in Japan today were built in the 1970s. Towers toppled by the recent typhoon in the city of Kimitsu, knocking out power to 100,000 households, were constructed in 1972.

About 6,000 to 8,000 towers were built in each year of the 1970s, versus about 1,000 a year during the 2000s, according data as of March 2016 from Japan's Organization for Cross-regional Coordination of Transmission Operators. Towers in Tokyo utility Tepco's service area have been in use for 42 years on average. But typhoons are not the only threats to power grids. An earthquake triggered a blackout on the northern island of Hokkaido last September, leaving almost 3 million homes without power.

After its financial viability was cast in doubt following the 2011 Fukushima nuclear disaster, Tepco managed to eke out profits in part by curbing investments in transmission infrastructure. 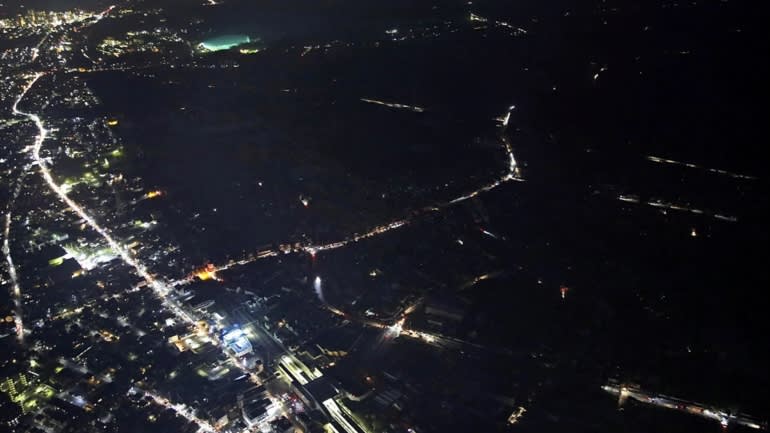 An aerial photo shows the extent of a power outage in the city of Chiba, near Tokyo, on Sept. 10, a day after a typhoon battered the region.   © Kyodo

Deregulation of the household power market in Japan, which required big regional utilities to spin off transmission and distribution from generation, has provided further incentive to cut back.

Tepco spent about 200 billion yen on grid work in 2015, down about 80% from the roughly 900 billion yen in 1991. The savings came in part from putting off updates to equipment thought to be structurally sound.

Transportation infrastructure around the country faces a similar problem. A quarter of the 730,000 road bridges in Japan as of March 2018 were at least half a century old, as were 20% of the country's more than 10,000 tunnels and 17% of the 5,000 quays. These numbers are set to rise further: by 2033, around two-thirds of bridges and about 40% of tunnels will be at least 50 years old.

"Every time [disaster strikes] people describe the scale as once in a century, but going forward we need to take steps on the assumption that this will happen every year," Kazuyoshi Akaba, Japan's new minister for land and infrastructure, said Thursday.