TOKYO (Kyodo) -- A large and powerful typhoon moved across Japan's southwestern region of Kyushu on Monday with record-breaking wind and rainfall, leaving at least two people dead, one missing and over 70 injured.

Typhoon Nanmadol, which also disrupted public transportation by grounding more than 800 flights and leaving bullet train services canceled or reduced in many parts of the country, is expected to travel northeast along the Sea of Japan coast of the main island of Honshu through Tuesday.

The Japan Meteorological Agency continued to warn of violent winds, high tides and mudslides across western to northern Japan.

Prime Minister Fumio Kishida postponed a trip to New York where he will deliver an address at the U.N. General Assembly this week. After monitoring damage caused by the typhoon, he is expected to leave Japan as early as Tuesday morning.

Around 6 p.m. Monday, the 14th typhoon of the season was moving northeast near Matsue, Shimane prefecture, in western Japan at a speed of 35 kilometers per hour.

It had an atmospheric pressure of 980 hectopascals at its center, packing winds of up to 108 kph with maximum gusts of 144 kph.

After issuing a special typhoon warning for unprecedented winds and waves in Kagoshima and Miyazaki prefectures in southwestern Japan on Sunday, the weather agency has downgraded its warning level.

The government ordered nearly 6 million people in western prefectures to evacuate at one point.

In Miyazaki, two people died due to the typhoon, including a 41-year-old man who was found dead after his mountainside cabin was destroyed by a mudslide, according to police and other sources.

"There have been mudslides several times around here. The soil is like clay, so it collapses easily," a 78-year-old man who lives nearby in the town of Mimata said, adding that the cabin had been constructed around a year ago.

A second man, 68, was confirmed dead after being pulled out of a car submerged in flooded farmland in Miyakonojo. 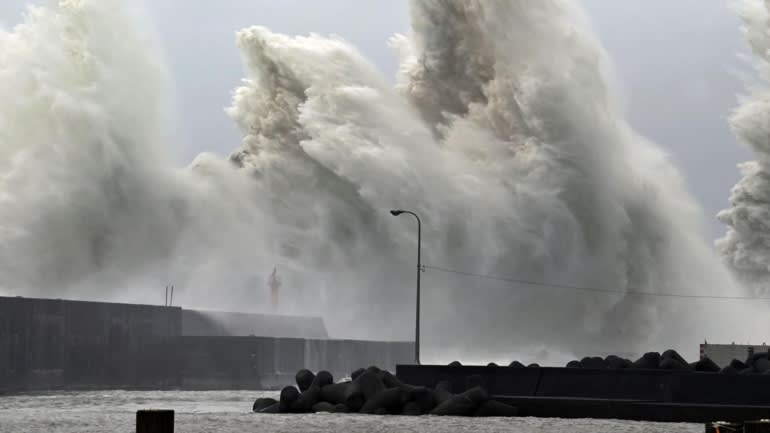 The 14th typhoon of the season has battered Japan's southwestern region of Kyushu.   © Reuters

Local authorities in Hatsukaichi, Hiroshima prefecture, are searching for an 82-year-old man who is feared to have fallen in a waterway.

More than 70 people were reported injured, mainly in the Kyushu region, due to the typhoon.

Over 85,000 travelers were affected as Japan Airlines and All Nippon Airways canceled more than 450 and 370 flights, respectively. Some flights have already been canceled for Tuesday.

In Kyushu, more than 350,000 houses were left without power.

The weather agency warned that the central region of Tokai could have torrential rain through Tuesday.

In the 24 hours to 6 p.m. Tuesday, the typhoon is forecast to bring up to 300 millimeters of rainfall in Tokai, 250 mm to the Kanto-Koshin region including Tokyo and 180 mm to the western region of Kinki.