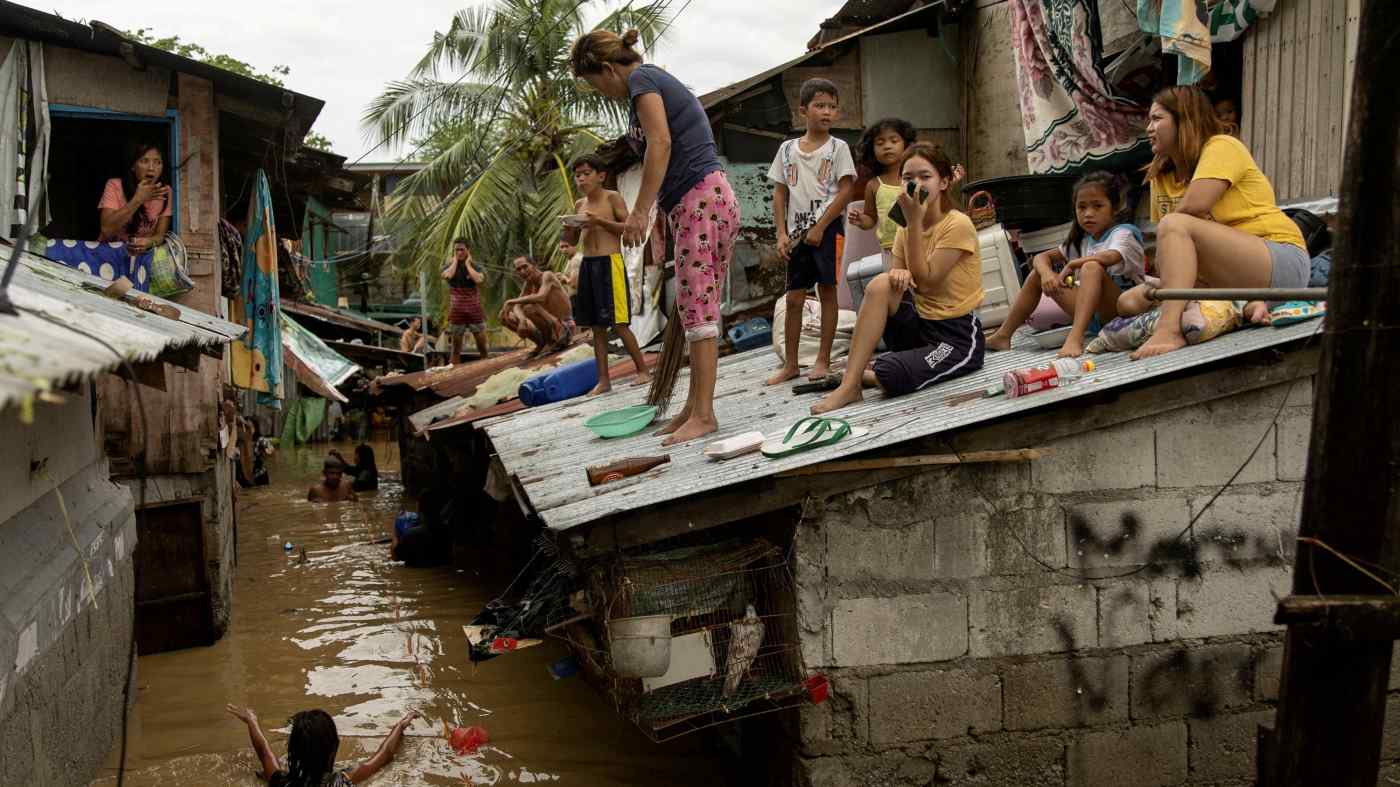 Residents wait on the roof of their homes for flooding to subside after Typhoon Noru in the Philippine province of Bulacan on Sept. 26.   © Reuters
September 27, 2022 22:07 JST | Vietnam
CopyCopied

Hundreds of flights in Vietnam were canceled and thousands of people started to leave their homes in central provinces, in anticipation of one of the most powerful storms to hit the country in 20 years.

Wind speeds could reach 183 kilometers per hour late on Tuesday, the meteorological agency said, adding that Noru was expected to make landfall on Wednesday before weakening and heading to Thailand.

About 270,000 military personnel were placed on standby in Vietnam, as Prime Minister Pham Minh Chinh urged authorities to expedite preparations.

"We don't have much time left. The storm is intensifying so our responses must be stronger and faster," he told an emergency meeting on Tuesday. "Evacuation must be done as soon as possible, with top priorities being people's lives and assets."

The central provinces of Quang Ngai, where a major oil refinery is located, and Quang Nam, home to the World Heritage site of Hoi An, were expected to be worst hit.

Footage from state television showed people fortifying their homes with bricks and sandbags in Quang Nam province, where a curfew was imposed and more than 133,000 residents were forced to leave their homes.

Authorities were racing to secure the country's coffee-growing areas north of the Central Highlands region ahead of a typhoon the meteorological agency said was packing wind speeds of 134 kph to 149 kph early on Tuesday.

"The storm is so strong that we've started feeling the impact even when it has not made landfall yet," said Mai Van Khiem, chief of Vietnam's weather agency, adding the most dangerous time would be a 10- to 12-hour period from late Tuesday.

Noru was the strongest storm to hit the Philippines this year. It killed at least eight people when it made landfall on Sunday night, flooding farmland and communities and damaging an estimated 1.29 billion Philippine pesos ($21.8 million) of crops, mainly rice.

Footage from a local broadcaster showed police cutting up fallen trees blocking roads in Quezon province, and residents sorting through debris with their hands.

About 46,000 people were sheltering in evacuation centers on Tuesday, and many more were left without electricity, the disaster agency said.